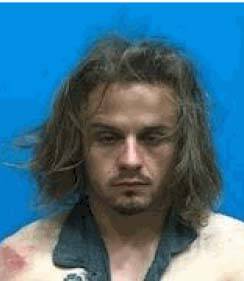 A man who initially appeared to be passed out in a vehicle is facing battery charges on a Nye County Sheriff’s Office deputy.

As stated in a Nye County Sheriff’s Office arrest report, the incident occurred approximately 5:17 pm. on May 10, when deputy Eric Anderson was dispatched to a location after the sheriffs’s office received reports of a man nodding in and out of consciousness behind the driver’s wheel of a parked gray sedan.

“I observed the male to be nodding in and out and appeared to be in a euphoric state between consciousness and unconsciousness because of drug use,” Anderson’s report stated. “I observed that there were two hypodermic needles on the center console inside the vehicle.”

Upon observing the needles, deputy Anderson told the man, identified as Skyler Fawver, to exit the car.

Fawver was identified by his Florida identification card.

“I then requested a records check of his information,” according to Anderson’s report. “I was advised by Nye County Sheriff’s Office dispatch that Skyler had numerous full extradition warrants for his arrest, issued out of the state of Florida.”

As Anderson placed wrist restraints on Fawver and awaited the confirmation of the warrants, Fawver allegedly removed a cell phone from his back pocket, Anderson’s report said.

“I attempted to take the cell phone from him and that’s when Skyler became physically combative, which made me to have to physically restrain him on the ground,” according to Anderson’s report. “During the incident, Skyler was able to strike me on the left side of my head with his knee. I was able to gain control of Skyler and placed him under arrest. “

Upon arrival of additional deputies, Fawver was placed inside of a sheriff’s office vehicle and transported to the Nye County Detention.

Fawver is charged with battery on a protected person and resisting arrest.