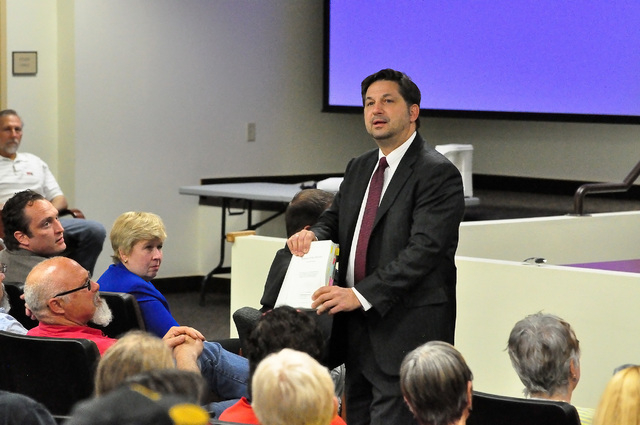 The founder of Understanding the Threat.com this week did not hesitate to quash discussions, innuendo and rumors within the community about the federal government planning to haul busloads of male Syrian refugees to Pahrump to start a new life.

However, John Guandolo, a former FBI agent and military veteran, did spend three days in Pahrump speaking to community members and Nye County law enforcement officials about what he perceives as a global threat of the Islamic movement.

He did not concur with the Syrian refugee rumor.

“I am not aware of the Department of Homeland Security busing Syrian refugees to Pahrump,” he said. “I always make it a point to shut that kind of ignorant talk down whenever I hear of it.”

Guandolo did say that the threat from the global Islamic movement is much more significant than domestic terrorism.

He spoke about why the United States is not seeing more terrorist-inspired attacks from the Islamic movement at present.

“My response is that if you understand their strategy, right now they are not focused on the west and the United States,” he said. “They are focused on the Muslim community.”

One of the many concerns Guandolo has is that teaching Islam in American schools is permitted and encouraged by the American legal system, as students have the right to academic instruction about religion.

Sharia, an Islamic religious law, governs not only religious rituals, but various aspects of day-to-day life in Islam.

Guandolo said the fact that Sharia is taught in American schools in the United States and Islamic schools, makes it relevant and makes it a valid doctrine for groups such as ISIS, al-Qaida, Boko Haram and others.

“When you look at what Sharia actually says, 100 percent of it is oblige Jihad until the entire world is under Islamic rule,” he said. “The law of Jihad under Sharia specifically supports what ISIS and al-Qaida says it does. We are seeing that right now in Germany and Las Vegas, when a woman is plowing over people at 40 miles per hour on the strip on New Year’s Eve, or a guy who goes into a Columbus, Ohio restaurant, with a machete hacking people. Those are acts of individual Jihad.”

Guandolo’s hard-line position on the issue has generated some push back around the country.

He’s been labeled anti-Muslim on more than one occasion by those who disagree with his beliefs.

He lamented the fact that some people prefer to attack the messenger, rather than the message he’s conveying.

“I am told that as far as Muslims are concerned, I paint with a broad brush but that is not true,” he said. “I’m specifically identifying the threat and saying that you need to be concerned about this because they are saying they adhere to a doctrine that threatens you. I’m saying that we have an obligation and duty to do something.”

Additionally, Guandolo said like Republican presidential candidate Donald Trump, he too supports an immigration ban, but not just for Muslims alone.

“I would support a ban on all immigration until we get a handle on it from the economic aspect, the security aspect, the health aspect,” he said. “There are a lot of issues on how we are handling immigration right now and by the way, the people who are legally trying to come through the system are getting crapped on. They are the ones that are paying the price while other people are manipulating.”

Conversely, Guandolo said there are many people who self-identify as Muslims that do not want to live under Sharia, and they don’t espouse Sharia.

He was cautious to say that not every Muslim should be feared or perceived as a threat, especially if they don’t adhere to the Sharia doctrine.

“As an FBI agent, I worked with Muslims who did very dangerous things for the United States,” he said. “They went over and went to Pakistan, Afghanistan and other places and literally went into al-Qaida safe houses and identified people that we were able to kill or capture.”

Guandolo did provide his thoughts on President Obama, who prior to becoming America’s first black president, was accused by most Republicans as a Kenyan as well as a Muslim.

More than 80 percent of Kenyans subscribe to Christianity, while 11 percent are Muslim.

“I have no idea whether the president is a Muslim or not,” Guandolo said. “During interviews, I tell the person that if I want to evaluate a man, I’m going to look at who he is and his background and what his policies are. Even though he says he’s a Christian, I don’t know.”

Though he’s in favor of banning all immigration into the U.S., Guandolo said he not sure how to go about such an exercise.

“I don’t know how you would ban all Muslims from entering the United States,” he said. “I would more accurately say that I think there should be a minimum five-year ban on all immigration until we get our act together. Not just Muslims. We have a system which is allowing people to come into the country that are hostile to us and it’s not just Muslims.”