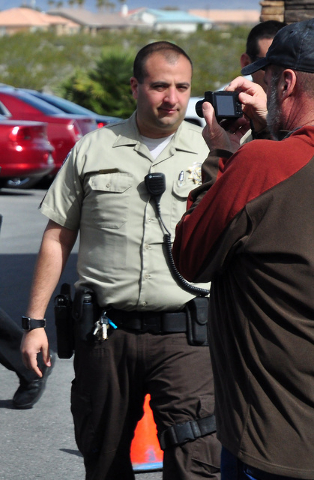 The filing says that Boruchowitz, who acts as the department’s public information officer, seized Gal’s laptop from his then-girlfriend as part of a criminal investigation.

Boruchowitz found a number of pornographic videos on the laptop, including a sex tape of Gal, 37, and his girlfriend, who is unnamed.

In March 2013, Boruchowitz (then a detective) called Gal’s girlfriend into the station to have her help identify people featured in videos on the laptop for the criminal investigation, but Boruchowitz showed her the video with her in it. He also showed other deputies, passing the video around for “comic relief,” and held “pornography matinees” at the station, the court document states.

“There were group (viewing) sessions, as far as I understand,” Gibson said. “It’s a disgusting thing.”

The lawsuit also alleges that Boruchowitz called Gal’s girlfriend to tell her that he enjoyed the videos, downloaded them to his cellphone and masturbated to them.

Just a few months later, Gal was formally charged with multiple felonies, along with Barbara Bell-Cates, 58.

In a criminal complaint dated May 22, 2013, the Nye County District Attorney’s Office charged the two with five felony counts, including statutory sexual seduction, pandering a child, perjury and child abuse in connection with a teenage girl. The complaint alleges that the two coerced the girl into prostitution in exchange for drugs.

The Gal case is still pending in Pahrump Justice Court with a status check set for June 15. A preliminary hearing date has yet to be set pending a decision on a discovery motion filed by the defense.

Gibson said the department had a duty to uphold the integrity of all evidence and that the videos should have been secured and not shown to personnel who weren’t involved in the criminal investigation. The lawsuit alleges that DeMeo knew about the viewings and that Brecht, Boruchowitz’s supervisor, encouraged the behavior by participating.

The sex tapes were Gal’s intellectual property and the department did not have the authority to show them publicly for nonofficial police business, according to the court document.

Boruchowitz has made headlines in the past for his involvement in numerous Pahrump-area scandals, including allegations that he used his position to influence a county sheriff election and coerced a woman to file a false report.

Contact Wesley Juhl at wjuhl@reviewjournal.com. Find him on Twitter: @WesJuhl. The Pahrump Valley Times contributed to this report.