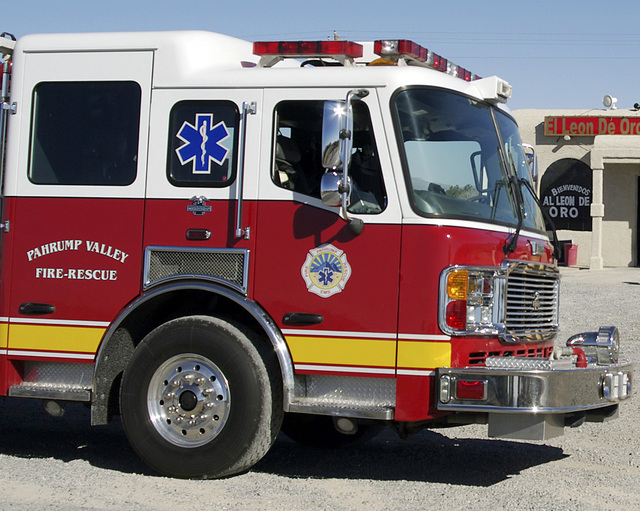 The concern was first raised back in August when Pahrump Town Board Chair Harley Kulkin announced the town may be in danger of losing members of the fire department.

At the time, Kulkin said a county commissioner approached several members of the department about the issue of privatizing the town’s ambulance service.

The commissioner’s actions, according to Kulkin, most likely prompted their decision to seek employment elsewhere, as privatization would have eliminated their positions.

“These highly trained and certified individuals in Pahrump have been accepted to work for agencies in Las Vegas,” Kulkin said. “It’s a terrible loss for the residents in this community.”

Additionally, Pahrump Town Board Vice Chair Bill Dolan said on Wednesday he was not aware of the recent action, but the news was troubling to him.

“If that’s the case, then I am very sad to see them go,” Dolan said. “I think that the comments or the meeting that was held by the chairman of the county commission with the union president two months ago, actually caused this mass exodus with his comments about privatizing the ambulance service in town. It was totally inappropriate.”

On Wednesday, International Association of Fire Fighters Local 4068 President Justin Snow confirmed the firefighters did in fact resign their positions to work in Clark County, while noting that their departure will not affect the level of service the department provides.

He made certain to assuage any concerns by noting fire officials are already looking to fill the void.

“We were full at 27 positions and four recently resigned,” Snow said. “It won’t be very long before we have those slots filled. We are actually testing this weekend, so we should have guys on the floor in what’s called precepting. It’s basically on the job training to make sure they are qualified and know what they are doing. Obviously we have to hire individuals who already have their certifications.”

Snow said more than 30 individuals have been identified who actually qualify for this weekend’s testing exercises, but he’s unsure how many will show up.

The exercise involves a series of both physical and aptitude exams, as well as interviews.

“I really wouldn’t count that as a 100 percent number because I’m not sure who will come out for the test,” he said. “We will be testing three days and usually it takes a few days more to put together recommendations. Phone calls will then go out. We could technically have them on staff within 20 days or so, if all goes as planned.”

The crew members who made the exodus were not long-time employees with the town. The longest serving firefighter was employed for roughly five years.

“The guys we lost were younger crew members that haven’t worked in the department very long,” Snow said. “They are all going to the City of Las Vegas Fire Department.”

The union president also provided his thoughts on allowing a private ambulance service to assume the town’s responsibilities, which he said would not be good for local residents. Virtually all of Pahrump’s fire personnel are cross-trained as EMT’s.

Snow noted that a for-profit ambulance service does not provide the same level of training and skills as the town’s fire department.

“We’re the Swiss Army Knife of emergency services. When you are trapped in something, you call us. If you have a heart attack, you call us,” he said. “Obviously if there’s a fire, you call us. If you’re entrapped in a car accident, a for-profit service can’t get you out of the car, they stand on the side of the road. With the town’s fire department, we can actually start the rescue. We can pop the door and get you out before the ambulance gets there,” he said.

Kulkin, meanwhile, echoed the feelings of Snow if the change were to occur.

“These professionals are highly skilled as firefighters and medics. They drive the ambulances, which have to take priority,” the chairman said. “A local family may have a fire and not be assured of the firefighters getting there when they should. Someone may have a medical situation, but if there was another of more importance, they will have to wait.”

According to the official Clark County website, the average starting salary for a level I firefighter in Las Vegas is more than $44,000 with a comprehensive benefit package, compared to a basic level Pahrump firefighter/EMT earning $41,903.