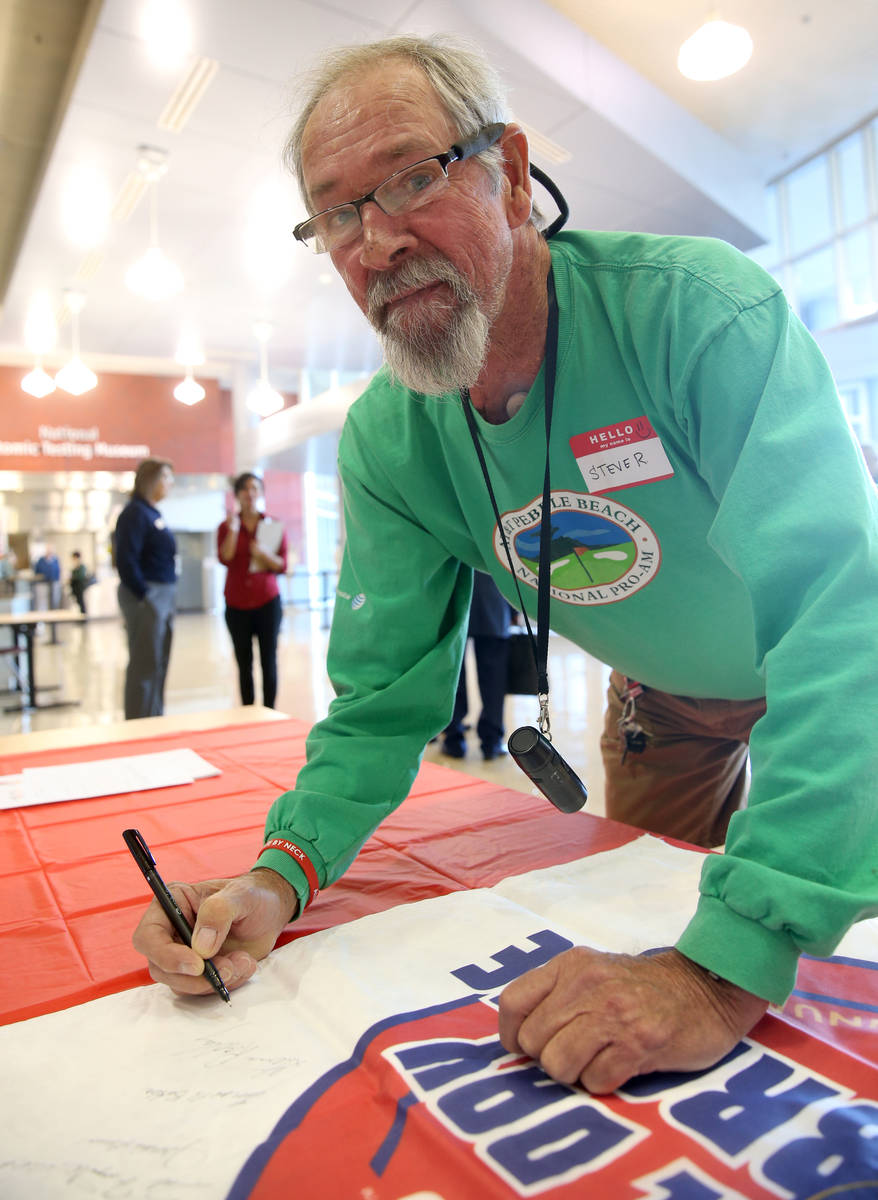 K.M. Cannon/Las Vegas Review-Journal Steve Radley, 73, of Pahrump, signs a banner during the Cold War Patriots National Day of Remembrance at the National Atomic Testing Museum in Las Vegas Monday, Oct. 28, 2019. Radley worked at the Nevada Test Site from 1969 to 1985 doing a variety of jobs from being a mechanic to crane operator. 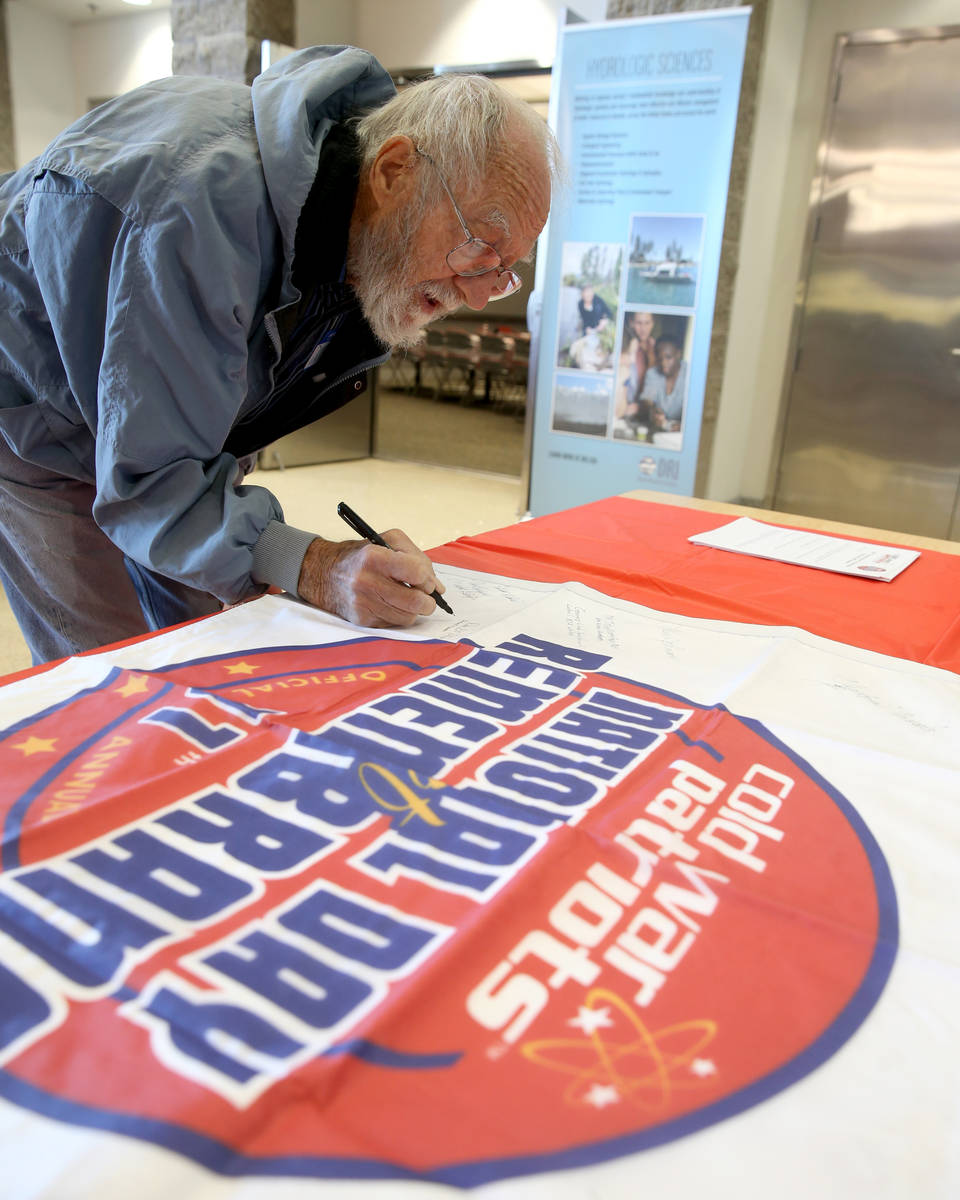 K.M. Cannon/Las Vegas Review-Journal Donald Miller, 79, of Las Vegas, signs a banner during the Cold War Patriots National Day of Remembrance at the National Atomic Testing Museum in Las Vegas Monday, Oct. 28, 2019. Miller worked at the Nevada Test Site from 1984 to 1996 as a cement mason.

Cold War Patriots will host a virtual 12th Annual Cold War Patriots Official National Day of Remembrance on Friday, Oct. 30. The presentation will be available for on-demand viewing any time. The celebration recognizes the men and women who worked in the U.S. nuclear weapons and uranium industries and honors those who are no longer with us.

Registration is open to Cold War Patriots, their friends and family and the public in general. Registration is available at coldwarpatriots.org/NDR or by calling 888-903-8989. After registering, participants will receive an email with instructions on how to view the ceremony at their convenience on their computer, smartphone or tablet.

Since the beginning of the Manhattan Project during World War II until the present day, more than one million civilian Americans have worked to create and maintain the United States’ nuclear defense. Most of the people working at the nuclear weapons facilities knew they were doing something for the war effort but did not know the dangerous details. They were forbidden from talking about their work with their families or even their colleagues. The efforts of these dedicated workers eventually led to the end of the war with the surrender of Japan in 1945.

Creating the world’s most powerful arsenal required the use of materials including uranium, plutonium and beryllium that were highly toxic, radioactive and hazardous to human health. Because of their exposure, these unrecognized patriots all too often suffer with increased rates of cancer, pulmonary illness and a vast array of toxic causation-related diseases that scientists and medical professionals are still trying to fully understand, diagnose and treat.

“I worked at Rocky Flats in Colorado for almost 30 years and was exposed to plutonium,” said Jamie G., who had part of a lung removed and must be on oxygen. “In the early years the procedures and safety features weren’t very stringent. Now I have lung cancer and just recently found out it has come back and spread to my adrenal glands and kidneys.”

CWP spokesperson Tim Lerew says though most people are aware of the armed forces veterans whom we celebrate on Veterans Day each November, these nuclear complex and uranium industry workers are often forgotten.

“They sacrificed their health, and even their lives, to provide for the common defense and safety of all Americans, but many citizens have no idea about the sacrifices these brave men and women made to protect us,” Lerew said. “The National Day of Remembrance is our chance to salute these unsung heroes and show our gratitude for their vital service that keeps us safe still today.”

Cold War Patriots is a division of Professional Case Management, which provides specialized in-home health care services to nuclear weapons and uranium workers. CWP is a community resource and advocacy organization and the nation’s strongest and most sustained voice to advocate for worker benefits. CWP helps nuclear weapons and uranium workers get the recognition, compensation and care they have earned. CWP, the first national organization to connect workers with benefits, does this work for free on behalf of its members.