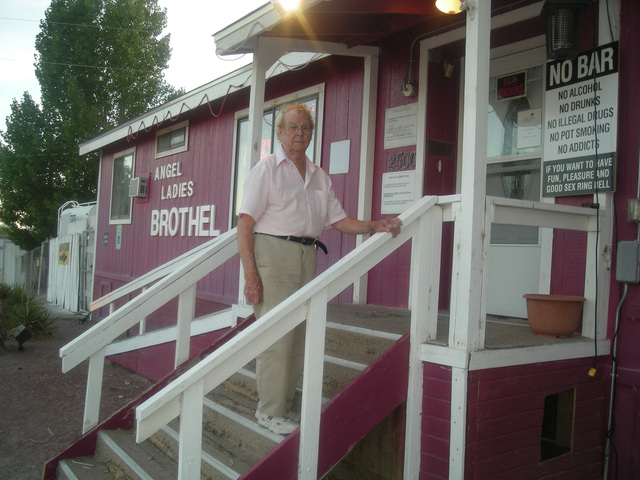 Mack Moore was born in a mobile home in Kinashaw, Oklahoma. Before finishing high school he took a job working on the railroad. He eventually found himself living in Oregon where, “for quite a few years” he worked as a timber faller, a forest worker who cuts the trees and bucks them into logs.

As a young adult, Mack attended college in Walla Walla, Washington, where he studied business and theology for five years. Eventually Mack entered the funeral home business and was very successful at it. He started small and grew the business, eventually building four funeral homes and servicing six cemeteries in the Eugene and Springfield, Oregon area.

After 25 years in the funeral home business, he decided to retire. In the meantime, he had been divorced and remarried.

Mack had wanted to get back into the ranching way of life that he had experienced as a child. In 1997 he and his wife, Angel, purchased 80 acres in Oasis Valley, located just north of Beatty, from Fran York.

In addition to fertile land, 20 acres of trees, and plenty of water emerging from the foothills on the west side of the valley, the property also featured Fran’s Star Ranch brothel.

Mack’s motivation for buying the property was not so much for the brothel but for the land; he wanted to get back on a farm. “I’m a farm boy,” he explained, “so I bought the land and the brothel was thrown in.”

York had owned and operated the brothel since at least the early 1960s. When she purchased the property, the brothel was located in a two-story farmhouse not far from where Angel’s Ladies stands today.

After purchasing the property, Mack and Angel changed its name to Angel’s Ladies. Mack’s plan was for the brothel to pretty much take care of itself and he would develop the land.

He described the place as a “desert oasis, a paradise.” He converted a small lake on the property into a swimming pool and planted trees around it.

With its open space and country atmosphere, many of the girls liked working there. All too often, he said, a brothel has a fenced back yard and the women are not allowed beyond that fence.

“The girls are kind of in prison,” he said. With his brothel, the girls were free to roam over all the 80 acres.

Just one girl worked there when they purchased the property, but word got around.

“The girls found out what a beautiful place it was here. (Soon) I had more girls than I knew what to do with,” he said.

At such times, some would move up to the Shady Lady, located 20 miles north on U.S. Highway 95 on Sarcobatus Flat. At times he would take girls to the Day and Night brothel at Mina. He sent some to Fallon. Some years later, his license was for 10 girls on the floor with a total of 15 registered. At that time he said many of the girls preferred to work two weeks on and two or three weeks off. Thus he needed more girls registered than were actually on the floor at any one time.

Mack suggested there were three types of girls who wanted to work at his brothel. The first type was a woman who wants to work and plans to “make a whole lot of money so she can retire in about six months.”

Such women he said, “can put on a real fake orgasm, and a man can see through that.” Mack said he didn’t want that type.

The second type, he said, was a woman who likes sex but she can’t orgasm all day long.

But she can put on a good party and will make a “pretty good brothel prostitute.” The third type of woman Mack says is the type that can’t get enough sex. They can have sex 24 hours a day. He says, “They like sex and they are making money and enjoying life, too.”

He wants the girls who like sex and want to make money. Mack suggested that if a woman “enjoys sex and enjoys giving pleasure simply because she likes to see someone be pleasured, then she’ll make a good worker for me.” It took him two or three years to develop an understanding of these differences in women.

Mack told the story of how the wing on the plane wreck alongside Highway 95 at the entrance to Angel’s Ladies got bent. It seems that once, prior to his purchase of the brothel, two couples were staying overnight in Death Valley.

The problem with staying in Death Valley, he said, is that once the sun goes down there’s not much to do. One of the men suggested that the four of them drive over to Beatty and “do some gambling.”

“Good idea,” they all agreed. So they drove over to the Burro Inn. They hadn’t been there long when one of the men asked the other, “Can I borrow the keys to the car?”

“What do you need the keys for?”

The fellow replied, “I gotta go to the bathroom in the worst way.”

“Hell,” the other replied, “There’s all kinds of bathrooms here in the casino.”

“Yeah,” came the reply, “but there’s a better one out here about two and a half miles. I’ll only be gone minutes.”

The man got the keys and drove out to Fran’s Star Ranch. Once there, he forgot the time.

The problem was, Mack said, the man “didn’t realize Fran’s girls were so damn beautiful.”

When he looked at his watch he discovered he’d been gone an hour and a half. He jumped in the car, tore out of the parking lot and just as he approached the plane alongside U.S. Highway 95 he spun out and hit the wing. That’s how the wing got bent. York, of course, had left the plane wreck there as a part of her signage.