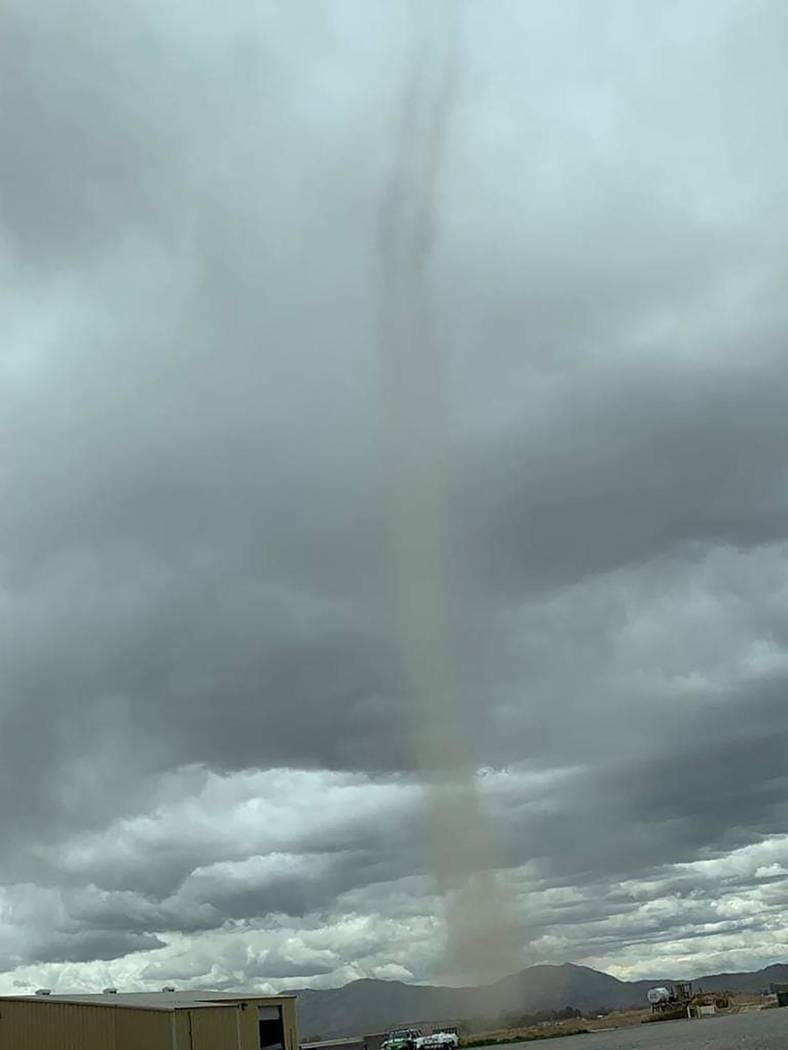 Thomas N. Faustina Smith/Special to the Pahrump Valley Times The image of what appeared to be a tornado in the area of Blagg Road and Irene Street was captured on Wednesday afternoon May 22. Officials from the National Weather Service in Las Vegas concluded that the image was that of what's known as a "landspout tornado" which qualifies as an EF-0 tornado.

A distinct weather phenomenon was witnessed above the Pahrump Valley on Wednesday of this week.

National Weather Service Meteorologist Jenn Varian said that a local resident sent in a photo of what initially appeared to be a tornado, near Blagg Road and Irene Street.

“The first photo that we received looked like a funnel cloud,” Varian said in a telephone interview from Las Vegas. “The difference between a funnel cloud and a tornado is that they both originate from the cloud base, but a tornado reaches the ground, whereas a funnel cloud does not reach the ground.”

Varian noted that Pahrump Fire Chief Scott Lewis was contacted about the incident to learn whether the system caused any damage.

“Apparently there is some construction going on that’s kicking up a lot of dust and apparently there have been quite a few dust devils this week, because it has been fairly windy,” she said. “We’ve had reports of dust devils all week so we thought it was likely a dust devil in the photograph. Chief Lewis went around to determine if there was any debris or any sort of damage as a result, but there wasn’t any.”

Later in the evening on Wednesday, Varian said weather service officials actually received additional photos, as well as video images of the funnel cloud at around 8 p.m.

“It became more clear to us that it looked like it extended from the cloud base, therefore it would not qualify as a dust devil,” she said. “It would either be a tornado or a funnel cloud, but we also have photos of it hitting the ground and kicking up dust. We concluded that it was a landspout tornado, which qualifies as an EF-0. The reason that it’s a landspout is because it did not extend to the cumulonimbus clouds, but rather kind of like a junior storm cloud.”