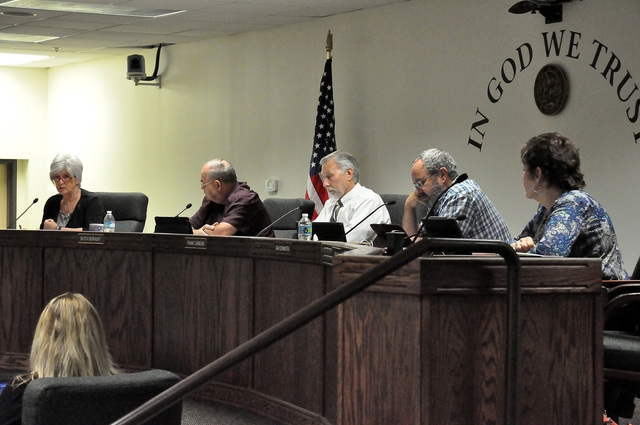 Horace Langford Jr. / Pahrump Valley Times After a heated discussion, Nye County commissioners on Tuesday voted to use its lone bill draft request to try to eliminate the state law that set up the Nye County Water District in 2007.

Horace Langford Jr. / Pahrump Valley Times After a heated discussion, Nye County commissioners on Tuesday voted to use its lone bill draft request to try to eliminate the state law that set up the Nye County Water District in 2007. 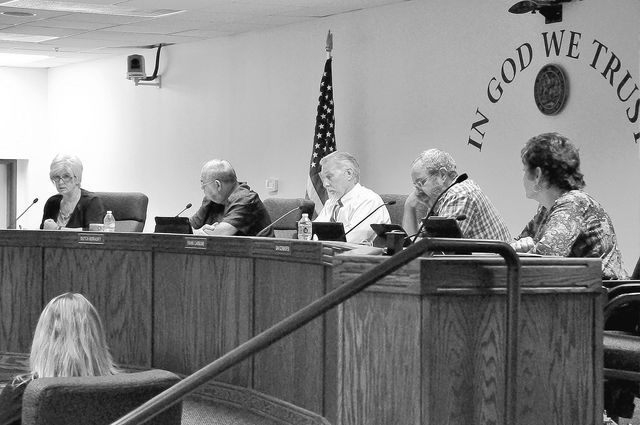 Horace Langford Jr. / Pahrump Valley Times - County Commissioners agonize over the fate of the water board.

The future of the Nye County Water District is now being sent to the Nevada Legislature.

After a heated discussion, Nye County commissioners on Tuesday voted to use its lone bill draft request to try to eliminate the state law that set up the water district.

The current Nye County Water District Act that was enacted in 2007 “is not being applied as it is written,” according to documents provided by the county.

“The protection of the environment of Nye County could best be served by the creation of a single governmental entity, the purpose of which is to secure and develop sustainable sources of water,” the documents said.

“I expect it to pass and we will be dealing with water issues on the commission board,” she said.

Cox said she isn’t sure when the deadline for the BDR is but added that “the sooner we get it out, the better.”

“One of the reasons we are doing it, is we are looking to make the government smaller and give voice to the people,” Cox said.

The three options that were presented to commissioners included eliminating the act, rewriting the act and breaking the north out of the act, reducing the water board to a smaller entity.

The approved bill draft will be among hundreds of others bill draft requests that will be considered by the 2017 Nevada Legislature. More than 1,000 bills are typically introduced during a session, however not all of them make it to committees or are voted upon.

Cox, who pushed for the bill draft request, said that the only option is to remove the act.

“At this point, I think that the water board is pretty much costing us a lot of money,” Cox said.

“I do not believe that the water board is actually accomplishing what we originally thought it would,” he said.

Borasky suggested taking money out of the Nye County Water District and putting it into the Central Nevada Regional Water Authority that addresses water issues in eight Nevada counties, including Nye.

Commissioner Dan Schinhofen called getting rid of the board a “knee-jerk reaction.”

“All of the systems the county now runs should be given to them to run and we, as a commission, need to allow them to function without continuing harassment, looking over the shoulders that we have done in the past,” he said.

“I believe the board wasn’t doing what is stated in the act,” Carbone said.

Many residents spoke against the Nye County Water District charging it as “a bone of dissension” and calling for its dissolution.

“Certainly, the water issues are not taken care of and don’t deal in this valley,” resident Kenny Bent said.

“One of the main reasons that it was put in place was actually to prevent a big importation project from Las Vegas, coming out here and stealing part of Nye County’s water,” Hafen said.

According to its website, the Nye County Water District was formed to develop sustainable sources of water vital to long-term economic development, protection of the environment and the well-being of the residents of Nye County.