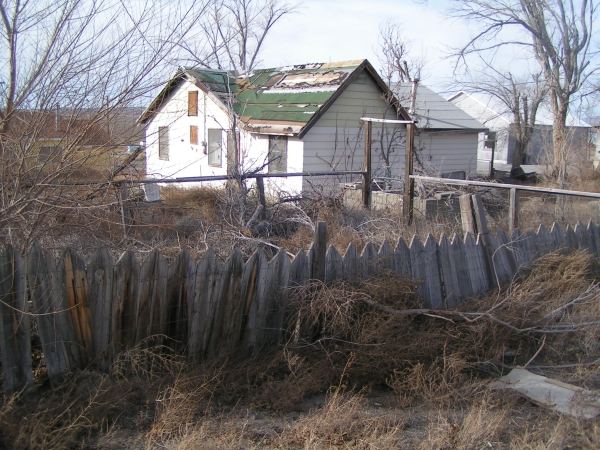 GABBS – Growing up in Gabbs in the 1950s, Jan Basinger still recalls seeing well-maintained yards even if they didn’t have sprawling lawns. The picture changed years later when Basinger moved back with her family in 1999 after living in several other places around the country.

Upon her return, Basinger said she was “appalled” at the condition of the majority of the houses in the town whose population hovers just above 250 people. Trash, broken-down fences, cars in front of houses on blocks and unkempt surroundings became part of an everyday landscape in Gabbs.

“When my husband, brother and I moved back, I was appalled at the condition of the majority of the houses,” said Basinger, who owns three buildings on a lot located at 605 J. Avenue.

During the Dec.1 meeting, Nye County commissioners directed the district attorney to notify the person responsible for the nuisance at 701 Brucite Street in Gabbs to abate it after Basinger had submitted a written complaint where she alleged the lot has “dry wood, weeds and debris scattered throughout” and presents a fire hazard. Gabbs is an old mining town in northern Nye County 100 miles north of Tonopah.

But Basinger said she plans to file complaints for other nuisances that beset the town.

“I intend to file a new complaint each month until the most egregious yards are dealt with,” Basinger said. “I want to target what I consider a real danger to the community, such as fire hazards, and then I’m going to test the ‘indecent and offensive’ part of the NRS code.”

Basinger is not the first Gabbs resident who has addressed the issue to Nye County officials. Another nuisance complaint about a mobile home located at 701 Third Street in Gabbs had been filed in November by Reyna Martin who alleged that a property became “dangerous” to the neighbors and community.

Basinger said she is concentrating on county code that defines nuisance as “anything which is injurious to health, or indecent and offensive to the senses.” Meanwhile, Gabbs’ ordinance describes nuisance as “every unlawful act, and every omission to perform a duty which shall annoy, injure or endanger the safety, health, comfort or response of any considerable number of persons or offends the public decency.”

“I am going after obvious hazards in the lots, such as the collection of dry wood and deteriorating houses which could cause a fire,” she said. “Next, the offensive part is more subjective, so we’ll see if lots littered with broken-down vehicles, tall weeds, trash, etc. is viewed as offensive by the BoCC.”