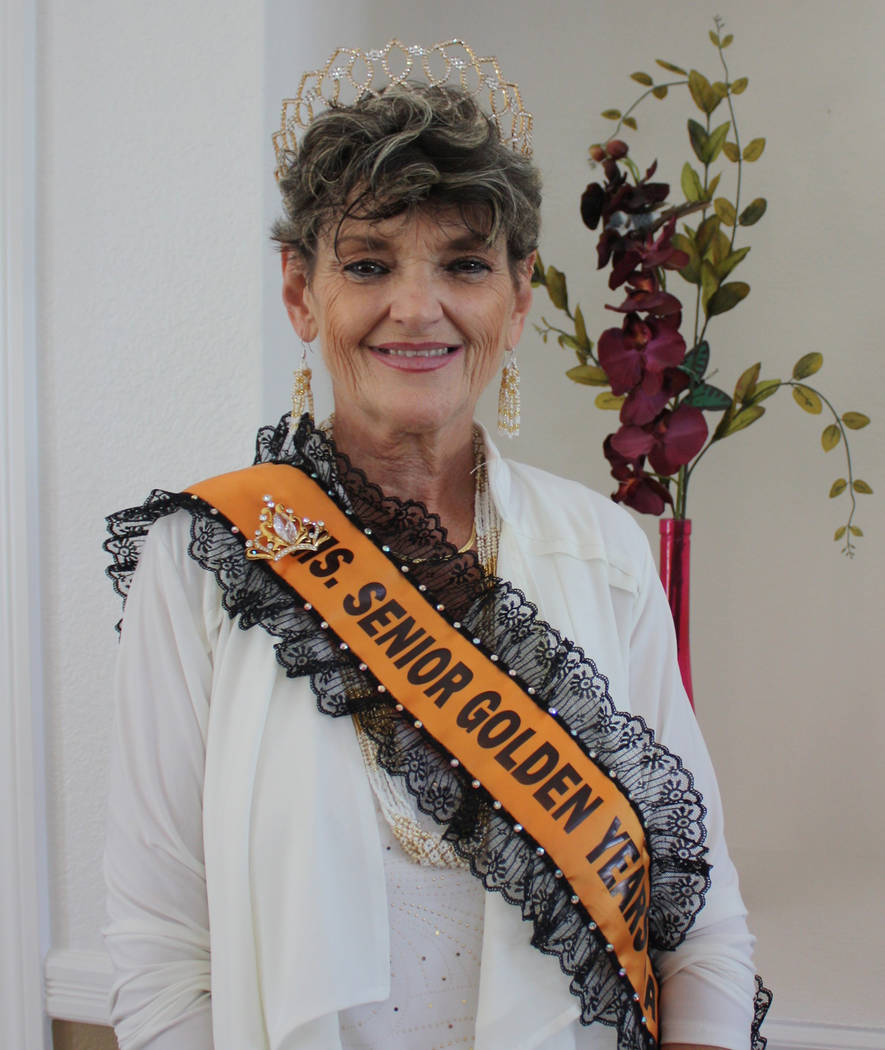 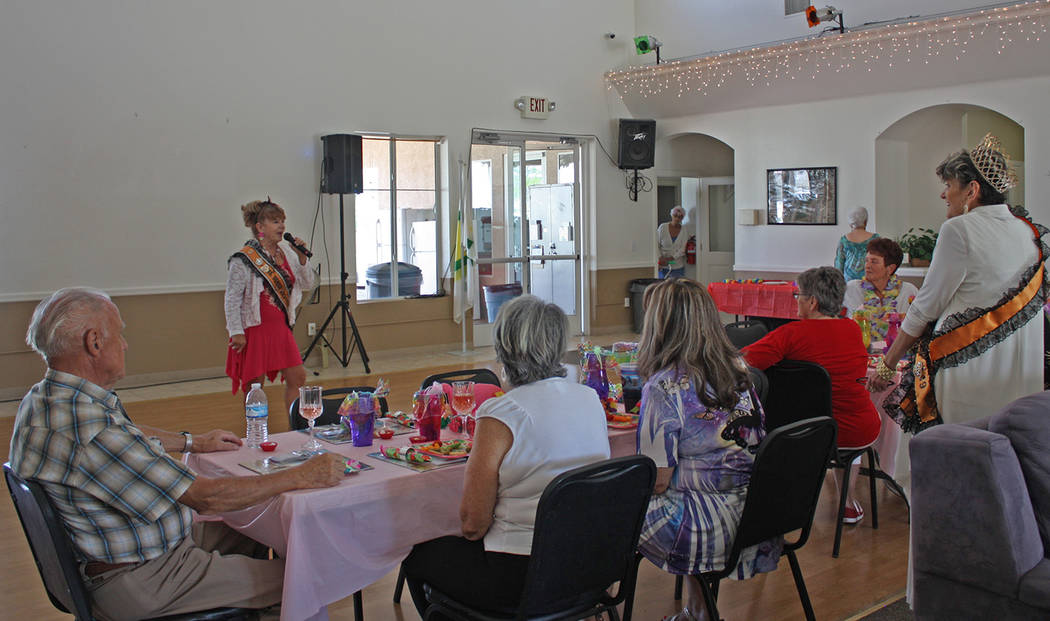 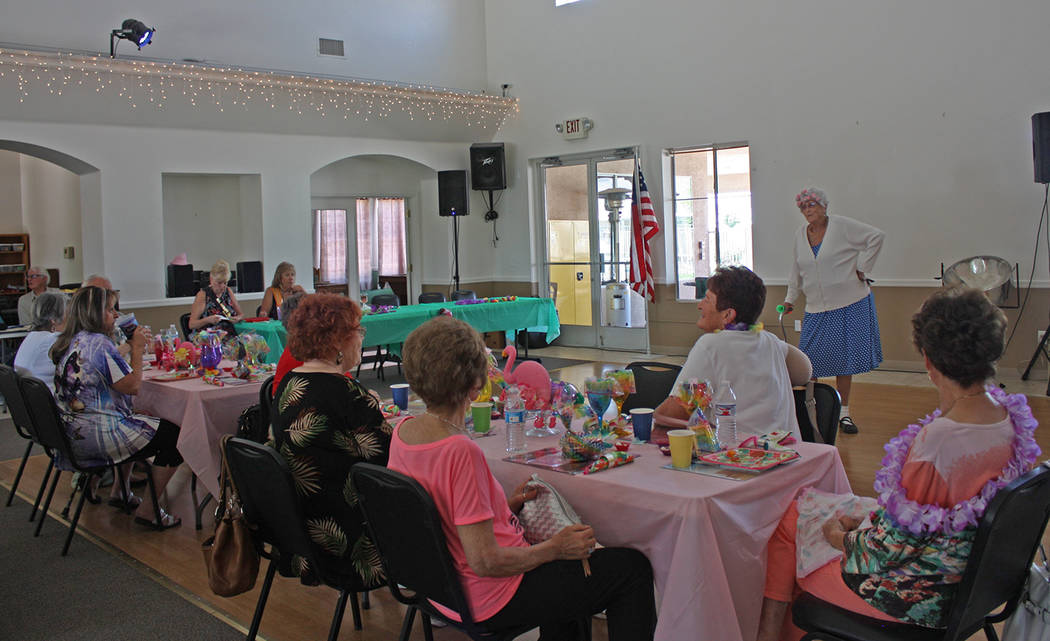 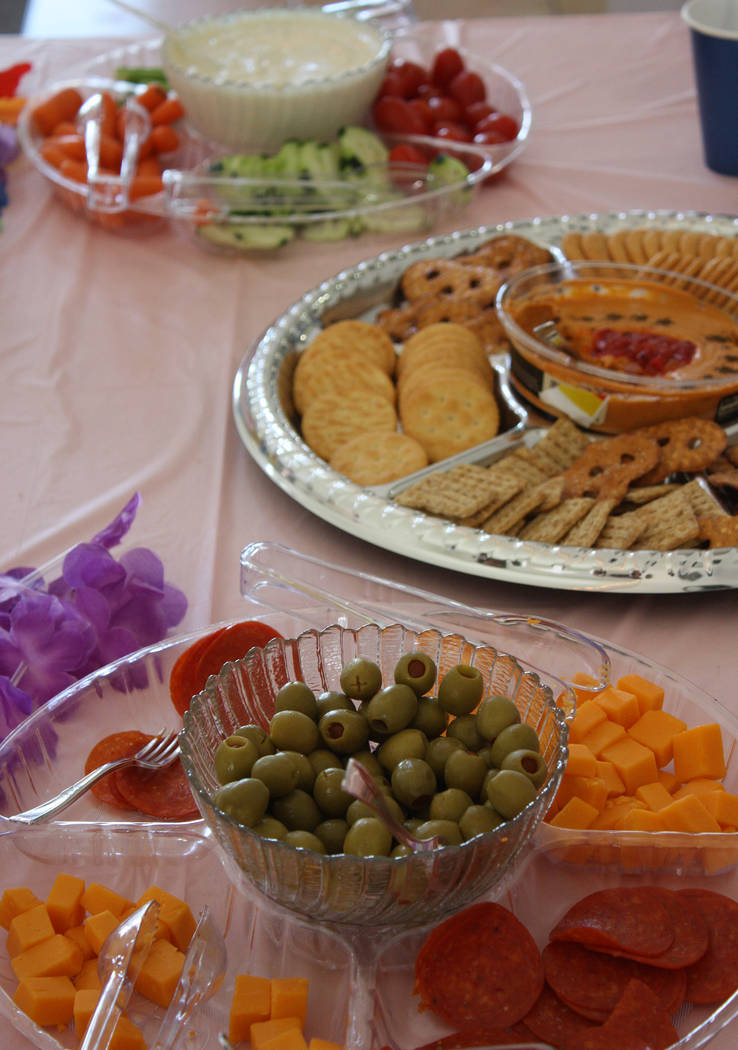 Robin Hebrock/Pahrump Valley Times The Caregivers Retreat included plenty of food for attendees to enjoy, along with a plethora of entertainment and socialization.

As 2019 Ms. Senior Golden Years Queen, Laraine Babbitt has many duties to attend to but perhaps the most special for the pageant winner is pursuing her personal platform.

When entering the contest this year, Babbitt decided to draw from her own experiences in life to choose that platform.

Having spent much time caring for her mother, the late Eileen DeCosta, when she was struggling with cancer, Babbitt said she knows firsthand how physically, mentally and emotionally draining it can be to take on the role of caregiver. That is why she selected the creation of a Caregivers Retreat program as her pageant platform and true to that mission, she hosted her first event on Saturday, July 27.

Taking place inside the Desert Greens Clubhouse, the Caregivers Retreat provided a fun and entertaining atmosphere for area caregivers to enjoy, allowing them to take a few hours to themselves and simply relax.

“I was my mother’s primary caregiver and I know from being such that there were times I got tired. And I found out it is okay to say that you’re tired and need a break sometimes,” Babbitt explained of her inspiration to start the retreat events. “So I thought, what a nice thing to bring caregivers together so they can have fun for the day and just kind of forget. As caregivers, we often put ourselves last, at the bottom of the list but really, in order to be a good caregiver you have to take care of yourself.”

Much of the afternoon was spent immersed in entertainment, thanks to the hard work of Teri and Don Rogers of Twilight Productions and those who lent their talents to the event.

“Teri, 2018 Ms. Senior Golden Years Queen, arranged for all the entertainment, which was volunteers by the Queen’s Court and the Nevada Silver Tappers, as well as Bill Watson, who did sound and also sang,” Babbitt said. “It truly took a village to have this event come to fruition and I thank them all.”

Babbitt thanked the entertainers, which included Pam Raneri doing a comedic sketch, Sharon Crisp performing a waltz, JoDee Van Stavern, who serenaded attendees, Maria Apodaca-Shaddy, who sang and danced, as well as dancing with the Golden Glam Ladies and Sandy Stell and Allene Gundersen who did a duet to J’Lo’s song “Let’s Get Loud.”

Also performing at the event were Carmen Murzyn, 2019 first runner-up, who sang the song that won her the talent award in the 2019 pageant, “Knock Three Times,” and Pennie Beccia, 2019 second runner-up, who did double duty as a licensed massage therapist and singer.

There was also plenty of food to devour, with Babbitt bringing appetizers and desserts. For the main feast, she purchased barbecue for the guests and made sure to give a special shoutout to QU Barbecue for the delicious meal.

“The caregivers who were there were very enthusiastic and spoke positively of this event,” Babbitt said afterward. “Liz Forrester, a caregiver for her 96-year-old mother, spoke of the importance of such an event. She was very impressed with the food and how relaxed she felt being there. She further stated it helps give caregivers a break, something she has never really had before, and gives them somewhere to go and relax while their loved ones are being cared for, a chance to socialize for a few hours and just have fun.”

Babbitt detailed that Forrester told her she is looking forward to the next event, the date for which has not yet been selected but Babbitt said she plans to host it at the end of August. Additionally, Babbitt noted that she is aiming to make the Caregivers Retreat a monthly event and she encouraged any and all caregivers to give her a call to learn future dates and get more information.