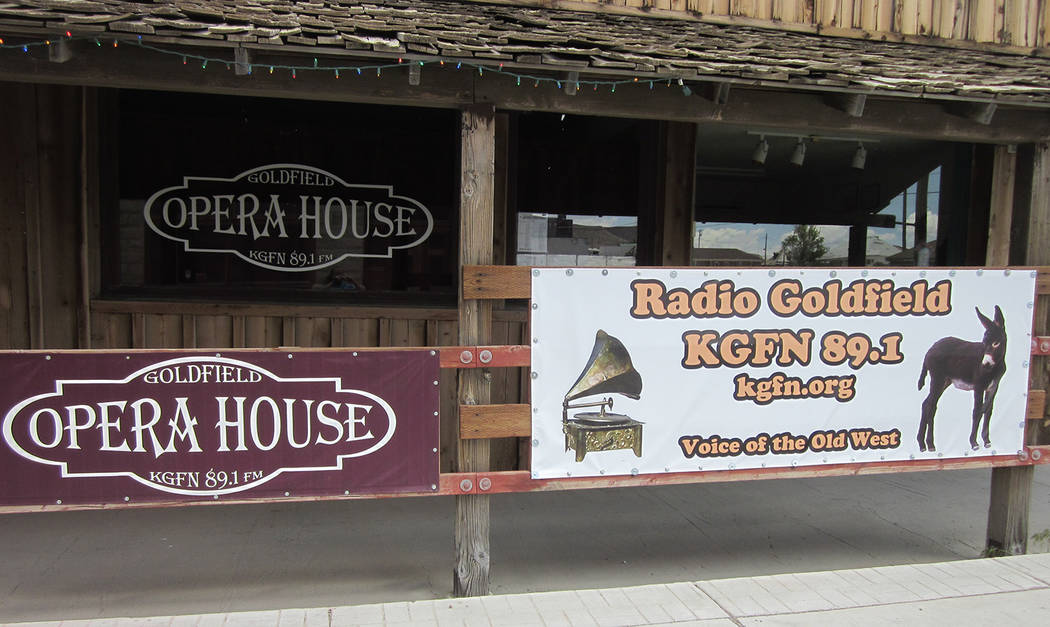 Special to the Pahrump Valley Times KGFN 89.1 FM Program Director Carl Brownfield said the station is hosting a fundraiser dinner show next month for upgrades to the station. Cost of the March 23rd, 6 p.m. event is $30 per person. To order tickets, call 702 493-6185 or 775 485-9923. Goldfield, roughly 140 miles north of Pahrump, is an unincorporated community and serves as the county seat of Esmeralda County.

Officials from a radio station in Goldfield, Nevada are seeking support by way of a dinner show fundraiser at the Goldfield Opera House next month.

The station, KGFN 89.1 FM, is known as “Your Voice of the Old West” to residents in the region.

Program Director Carl Brownfield said the station is an all volunteer non-profit 501c3 entity, where in order to maintain operations, the station, which features a mix of music, talk shows and news, holds fundraisers in the spring and fall each year.

He also said the station’s non-profit status does not allow for regular advertising, thus revenues are generated by way of area sponsors.

“In order to keep the doors open and have money for equipment, modernizing and upgrades, we have to have income,” he noted. Because we are a nonprofit, all of our monies come in as donations, just like Nevada Public Radio. That upgrade is going to cost us about $7,500, so we are looking for donations and grants. My wife Patricia is an expert grant writer. Hopefully, we will be successful in securing some, or part or all of the money through grants for this upgrade.”

Next month’s fundraiser, being held March 23, Brownfield said, comes in the form of a dinner show featuring the quintet Mama’s Wranglers at the venue.

Additionally, Brownfield said he is looking to increase the station’s reach in the area as part of the upgrades.

“At present, we have applied to upgrade our power level from 150 watts to 1000 watts, but the Federal Communications Commission, (FCC), is very slow,” he said. “We have been waiting for the FCC to open a window for translators so we can broadcast to a wider audience. We have a website called kgfn.org if you want to listen to us. We are a non-profit community radio station with a live venue attached that we call the Goldfield Opera House. We went on the air in 2011, so we have been broadcasting 24/7 since then.”

Regarding the dinner, Brownfield said the chef, Sherry Ann Huffman, may opt for a western-style affair.

“When I recently spoke to her, she was thinking of preparing barbecued pulled pork sandwiches, baked beans and maybe coleslaw,” he said. “The entertainment is a family band called Mama’s Wranglers, and they put on a very good show, along with skits and music. The event is coming up on March 23 at 6 p.m.”

To those who are not familiar, Goldfield, roughly 140 miles north of Pahrump, is an unincorporated community and serves as the county seat of Esmeralda County.