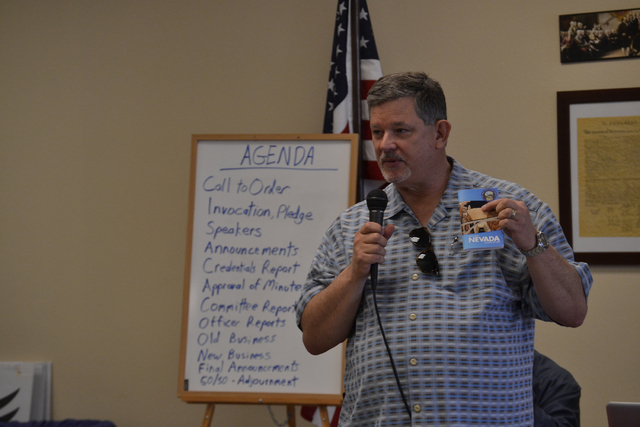 Oscarson said he is opposed to “throwing money” at school projects that don’t necessarily benefit students. Bond extension and prevailing wage elimination on school projects were included in the proposed legislation. However, he explained, Nye County communities had spoken out against bond extensions and because of that – though he favored the prevailing wage component – could not ultimately support the bill.

Though the prevailing wage issue was not addressed in the bill, he said, he is hoping to address taxpayer burden with the current discussions regarding an overhaul to the Public Employees Retirement System.

He said he would like to see a revamping of the retirement system to include contributions from new public employees. Current local, county and state employees would not be affected, he said. The system for current employees would remain in place. “A commitment made is a commitment kept, as far as I’m concerned,” he said.

Commissioner Dan Schinhofen requested that Oscarson advocate for reform to collective bargaining rules that would allow municipalities additional flexibility in negotiating union contracts. Three of the five Nye County Commissioners will testify in Las Vegas on the issue Schinhofen said, and urged Oscarson to help it get through committee.

Oscarson said he is focused on legislative issues that affect Nye County. The list includes:

• Rekindling the conversation regarding forward movement on Yucca Mountain.

Pahrump business owner Tom Saitta asked Oscarson to provide public education on the proposed business license fee increase, which he characterized as a “disguised margin tax.” Saitta said if that the fees are increased, his business will lose money, he will have to lay off employees and increase product prices. “If it can hurt my business, can you imagine what it would do to the smaller mom and pop businesses?” he asked.

Oscarson reported that his office has received over 1,500 emails with comments, requests, questions and remarks regarding current legislation and encourages that contact through co-hosted rural legislative conference calls with Sen. Pete Goicoechea, Assemblyman John Ellison and himself on Thursdays. Residents can participate by calling 866-949-6798, and entering identification number 9995146, at 3:30 p.m.

The next meeting of the Nye County Republican Committee Chairman will take place on April 18 at 10 a.m.

Office elections will take place at that time. The slate of candidates include: Bill Carns for chairman; Leo Blundo and Dave Caudle competing for vice-chairman; Jeff Bobeck and Bill Newyear competing for secretary, and Linda Bobeck and Gary Vavzycki competing for treasurer.