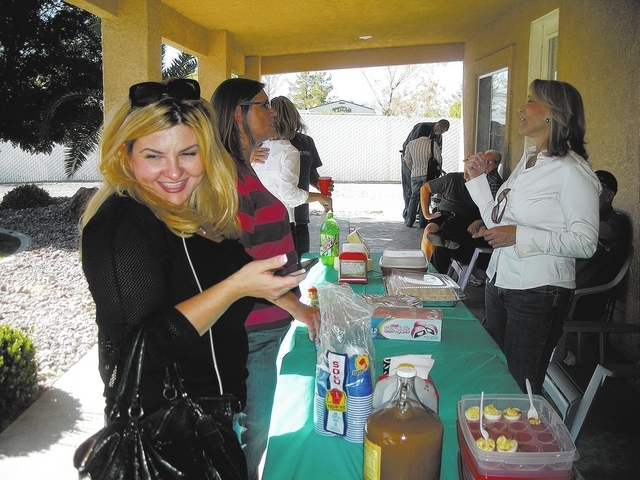 Three candidates for state office and numerous county officials were on hand along with party faithful for a barbecue at the home of Nye County Republican Central Committee Chairman Bill Carns Saturday.

The event attracted Las Vegas officials like Assemblywoman Michele Fiore and a candidate for the 34th assembly district, Victoria Seaman, who don’t even represent Pahrump. Assemblyman James Oscarson, R-Pahrump, called it a sign of Pahrump’s growing influence in state politics. Republican candidates for state office hope to replace Democrats who are term-limited.

State Sen. Barbara Cegavske, R-Las Vegas, ran unsuccessfully for the newly-created fourth congressional district in 2012, finishing second to Danny Tarkanian who lost to Democrat Steven Horsford in the general election. She is term limited in the state Senate and hopes to replace a term-limited Ross Miller as secretary of state. Miller has announced his intentions to run for attorney general.

“I feel I’m very well qualified to be secretary of state for the state of Nevada,” Cegavske said. “I’ve been here 40 years, I love it. I served almost 18 years in the legislature between the Assembly and the Senate. I also served on the Legislative Operations and Elections Committee as chair when Republicans were in control.”

When asked what she would do differently, Cegavske said she doesn’t agree with allowing people to register the same day they vote. “I think there’s too many issues with that,” she said.

Cegavske does favor providing identification when people go to vote.

But the secretary of state doesn’t just deal with elections.

“There are fees that are excessive that we have to look at within the secretary of state, we want to be competitive with the other states, especially the western states. Right now on one of the fees you can get it for $100 in New Mexico and it’s $500 in Nevada,” Cegavske said.

Cegavske thought she finished pretty well in the 2012 race for Congress.

“There were nine Republicans in the primary and I did very, very well in Clark County. We had limited funds and when you have that many Republicans in one race it is very, very difficult. But I thought we did very well, we came out second out of nine,” she said.

State Sen. Mark Hutchison, R-Las Vegas, is running for Nevada’s lieutenant governor, which is second only to the governor’s position, but is a lot more important than what people joke about vice presidents only going to funerals. Hutchison said the lieutenant governor is a member of the Board of Economic Development.

“What I’d like to see us do is play to our strengths. So what are our strengths in Nevada? Number one, tourism, gaming and entertainment, convention business, we should always make that an important focus of what our efforts are all about,” Hutchison said. “We need to really increase our international tourism to Las Vegas and to Reno and throughout Nevada.”

“The other thing I would really focus on is what I call Nevada’s new economy. Where is Nevada going to be in the next 10 years?” Again play to our strengths. One of the greatest assets we have in this state is controlled airspace. We have more controlled airspace in Nevada than all of the lower 48 states combined,” Hutchison said. “One of the great opportunities for us is to develop what are called unmanned, automated systems where there are aircraft that are flown without pilots, thus automated.”

The Legislature allocated $1 million to vie for a Federal Aviation Administration test site for the unmanned aircraft program. “If Nevada is able to get that test site and continue to develop these opportunities we could see a whole new aerospace industry developed in Nevada,” he said.

As a constitutional lawyer, Hutchison wants to ensure Fourth Amendment and privacy rights are protected in a pilotless airplane industry but at the same time develop a new industry that could explode jobs and economic opportunity in Nye County.

Hutchison said he volunteered hundreds of hours in the state’s opposition to the Affordable Care Act, known as Obamacare, joining other states in a suit that was struck down by a 3-2 vote of the U.S. Supreme Court. He stepped in pro bono after the state attorney general wouldn’t file the case.

“I will continue doing everything I can to make sure we have a reasonable and rational health care system in Nevada and I don’t think Obamacare does that,” he said.

Hutchison’s opponent, Sue Lowden, former chair of the Nevada Republican Party, TV anchorwoman and state senator, was also at the barbecue. Lowden said she’ll put her experience in the tourism industry to work, she is the owner of the Pioneer Hotel in Laughlin but said she no longer owns a part interest in other Nevada casinos.

“I think I’m uniquely qualified for the job. I’ve been in the tourism industry for more than three decades. The No. 1 duty of the lieutenant governor is to be the chairman of the tourism commission, you also sit on the Board of Economic Development. I have built and have been involved in creating jobs and making payroll, my name’s on the front of the check as well as the back and I think when businesses are looking to come to Nevada and thinking about coming here, they can talk to me,” Lowden said.

Lowden said she’s spent a lot of time in Pahrump and Tonopah. “I’ve been out to Yucca (Mountain) on numerous occasions, I’m not sure how many people can say they’ve actually been out there over the years. I’m a big proponent of anything that’s developing here as far as solar, geothermal, all the exciting things that are possible here in Nye County I’m a big proponent. Anything I can do as lieutenant governor, sometimes it takes someone with a state title to come in and close the deal.”

“The difference between me and anybody else running is I look at this as a full-time job,” she said. “I have the luxury of having my children raised and having the time to do that but I think with unemployment still so high, 9.5 percent in our state and some counties even higher than that, you need a full-time person focused on economic development and tourism and I’m willing to dedicate that time.”

Lowden feels this will be a much less political race than when she lost to Tea Party favorite Sharron Angle in the U.S. Senate race against incumbent U.S. Sen. Harry Reid, D-Nev. in 2010. It was a race where the press continued to barbecue her for a statement made about trading chickens for health care.

“There’s not as much pressure on this race. That was a very important race, that was a national race and I feel already that this is more local,” Lowden said. She said she’d bridge the divide, whether it’s Tea Party or moderate Republicans. “There’s a lot of different kinds and if you’re involved you’re involved, no matter what kind of Republican you are, so I’m reaching out to all of them.”