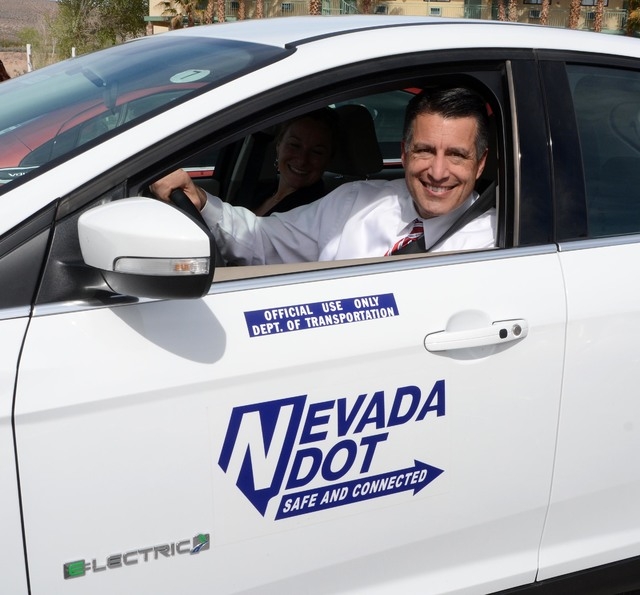 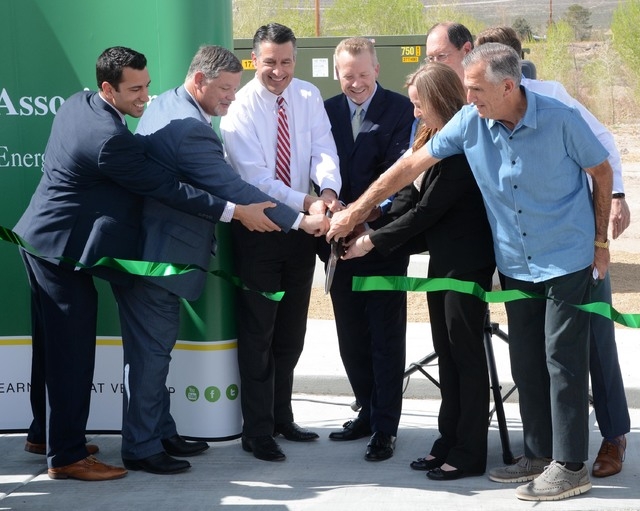 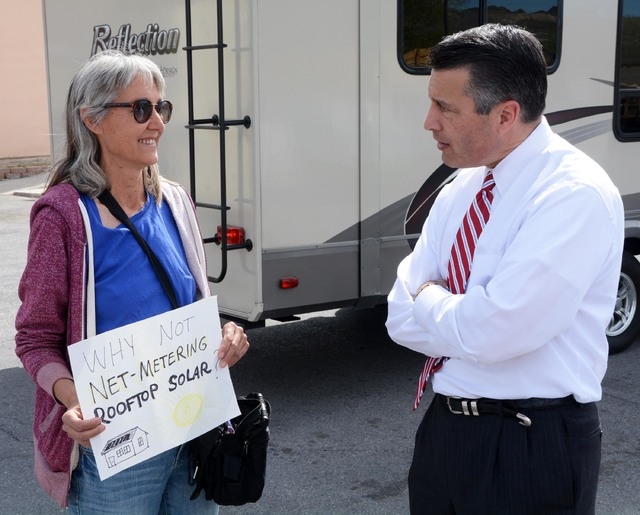 BEATTY — The town was the scene Tuesday of what Gov. Brian Sandoval called “a historical day.”

The event was a ribbon-cutting ceremony for the first electric vehicle charging station for the governor’s proposed “electric highway.”

“This is the first intra-state electric highway in the United States of America,” said Sandoval. “Think about that.”

He said it was part of what he calls “the new Nevada,” and that this was a “foundational moment for this electric highway in the state of Nevada.”

“I don’t know if you know this, but I’m really competitive,” added the governor. “I like being first, especially for something innovative like this.”

“If you own an electric vehicle, you want to have the confidence that you can make it from community to community, and this is the first step.”

The first electric highway will cover 448 miles of U.S. Highway 95 between Las Vegas and Reno, including a charging station in Tonopah later this year.

The governor wants to see it expand to other highways in the state, specifically mentioning the U.S. 50, the Interstate 80, and the I-15.

He said that the project would boost tourism, enabling people who drive electric vehicles to visit remote parts of the state, including state parks and places like Rhyolite.

Valley Electric Association Inc. installed the charging stations, which are located behind Eddie World and Death Valley Nut and Candy.

“Eddie World is an absolutely fantastic location for this charging station, as it is at the entrance to Death Valley and on a well-traveled highway,” Valley Electric CEO Tom Husted said.

Eddie World owner, Ed Ringle, said, “I’ve been in Beatty 34 years, and I never thought we’d be first in anything.” He said it was an honor to take part in the project.

Two of the charging ports at the station will fully charge an electric vehicle in about four hours. A third port will charge a vehicle to 80 percent in thirty minutes. This charge time can also be a boost to local businesses, as owners will have time to explore town while waiting.

While the event was to highlight the electric highway, one resident approached the governor with a recent ruling impacting residential solar users.

“My issue was that some of my friends who live in Las Vegas are saying the recent PUC decision on rooftop solar net-metering has been unfairly harsh on existing owners of rooftop arrays, and new prospective rooftop solar customers are getting scared away,” Cunningham said.

She says that Sandoval “seemed very sincere,” and told her that it was originally his idea to introduce net-metering to Nevada.

“He told me he had no influence over the PUC and its recent punitive decision. I told him that I was happy he formed a Clean Energy Task Force to try to address this controversy, and he said, ‘Yes!’ I think he was glad someone recognized his efforts.

“He shook my hand a second time and was quite polite about my little ‘protest’,” she added.

Asked about his turning down a possible appointment to the Supreme Court, Sandoval said, “I didn’t have direct communication with the White House, but, for me, it was an honor to be mentioned. But given the current situation in Washington, I didn’t think it was a good time.”

While in Beatty, the governor visited with kindergartners and first graders at Beatty Elementary School and read to them to highlight “Nevada Reading Week.”

After the event, the governor drove away in an electric car owned by the state.