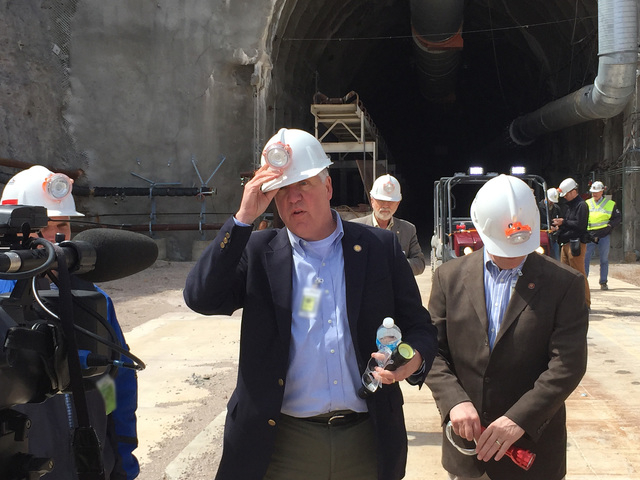 WASHINGTON — Gov. Brian Sandoval says Yucca Mountain supporters in Congress should give it a rest, there’s no way Nevada can be persuaded to accept a high-level nuclear waste site.

“There is nothing for Nevada to negotiate,” Sandoval told the Illinois congressman leading a charge to revive the project.

Sandoval’s message was in a letter dated May 21 and released Friday. It was to Republican Rep. John Shimkus, chairman of the House environment and the economy subcommittee who is preparing legislation to spur a resurrection of the controversial program that the state battled until President Barack Obama put it in mothballs in 2010.

Shimkus in April and earlier this month invited new talks with Nevada leaders.

“My door remains open to hear from any Nevada leaders willing to engage in a constructive dialogue about the safety and benefits of Yucca Mountain,” the lawmaker said in a May 13 letter to Robert Halstead, executive director of the Nevada Agency for Nuclear Projects.

Sandoval said he was providing the state’s response.

“Because this issue is of such paramount importance to the state of Nevada, there must be no misunderstanding of Nevada’s position: we oppose the project based on valid scientific, technical and legal merits,” he said.

Shimkus in April led a congressional tour of Yucca Mountain in a bid to highlight the site 100 miles northwest of Las Vegas.

An energy spending bill the House passed early this month contains $175 million for Yucca Mountain. An equivalent Senate bill unveiled last week was silent on Yucca although there may be efforts to add money through amendments. The project continues to enjoy broad support in the House. Its standing in the Senate is less clear.

In advocating a Yucca restart, Shimkus has pointed to reports by the staff of the Nuclear Regulatory Commission that the site could meet safety standards to store waste underground from nuclear power plants and government weapons sites for up to a million years.

Supporters of reviving the project say roughly $15 billion and more than two decades of study have gone into the effort, and that the decision to scrap it was made not on merits but in a deal between Obama and Sen. Harry Reid, D-Nev.

Nevada has been adamant in its opposition, challenging government research it says was tilted in favor of finding Yucca Mountain acceptable. They argue a single incident at the site or during transport of the highly radioactive material would doom the state’s tourism-based economy.

As for politics, Nevada leaders still smart from what they charge was a deal to begin with to send nuclear waste to the state. That took place in 1987, a time when Nevada had little clout in Congress.

In pushing for a Yucca Mountain revival, Shimkus cited continuing support for the project among Nye County leaders in rural Nevada, and a split within the state’s previously united congressional delegation.

Rep. Cresent Hardy has called for Nevada to consider negotiating for benefits if the site can be proved safe. Reps. Joe Heck and Mark Amodei also have said Nevada should have a seat at the table in discussions on Yucca Mountain.

Sens. Harry Reid and Dean Heller, and Rep. Dina Titus, have said Nevada should not open a door to negotiations.

Shimkus spokesman Jordan Haverly said Friday the congressman was not available “but his position is unchanged: Yucca Mountain is the law, affirmed by the courts and backed by world-class science.

“Leaders from the counties closest to the mountain have supported the project and half of the state’s House delegation has shown a willingness to talk about it,” Haverly said. “The congressman’s door remains open to any other Nevada leaders willing to have a constructive dialogue about the benefits of following the law and moving forward on this important national asset.”