A portion of the derogatory terms found on a Pahrump business on Sunday. The Nye County Sheriff's Office in investigating the incident as a potential hate crime. Courtesy of the Council on American-Islamic Relations 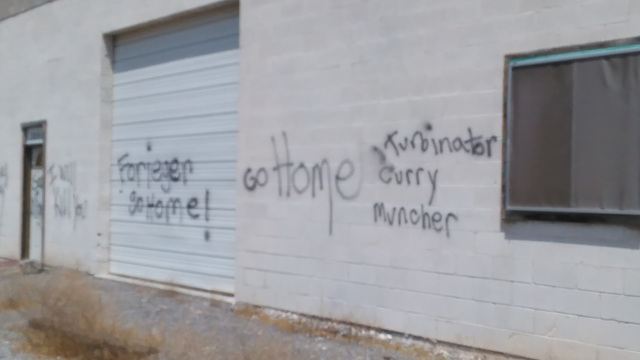 The Nye County Sheriff’s Office is investigating a graffiti incident in Pahrump as a possible hate crime, and a national Muslim civil rights and advocacy organization is asking state and federal law enforcement to join the investigation. Selwyn Harris/Pahrump Valley Times

Graffiti being investigated as a hate crime

The Nye County Sheriff’s Office is investigating a graffiti incident in Pahrump as a possible hate crime, and a national Muslim civil rights and advocacy organization is asking state and federal law enforcement to join the investigation.

According to the sheriff’s office, deputies were dispatched at approximately 4:30 p.m., Sunday to Z &S Imports in the 3000 block of North David Street and discovered that the business had been spray-painted with derogatory terms apparently directed at the business owner, who was unavailable for comment on Monday this week.

“These statements insinuated a bias based on the business owner’s religion, and is being investigated as a hate crime,” the sheriff’s office said in a statement.

A general assignment detective has been assigned to the case and no further details will be released until the investigation is complete, according to the release.

However, the Council on American-Islamic Relations is asking that state and federal authorities investigate what they said are repeated threats targeting the Muslim business owner during the past month-and-a-half, according to a release by the council on Monday.

Although the Pahrump Valley Times was unable to reach Z &S Imports owner, Waqar Ahmed, 61, the Las Vegas Review-Journal was able to receive a few comments from the alleged victim.

Ahmed told the Review-Journal that he is the caretaker for his 82-year-old mother with dementia, adding, “We’re not equipped to handle any kind of violence.”

According to the Review-Journal, Ahmed claimed that a man threatened him by phone about a month ago, saying, “He said that he was going to kill me,” and that he should go back to the third world country where he came from.

Ahmed filed a temporary protective order against a Pahrump resident in Nye County Justice Court on June 7, a court clerk told the Review-Journal. The order lasted for 30 days, but Ahmed did not reappear in court July 5 to request that the order be extended.

Ahmed claimed that he didn’t know he was supposed to appear in court, according to the Review-Journal.

A resident who lives in close proximity to the business said he believes the act occurred on Sunday.

Though he wanted to remain anonymous, he said he immediately contacted authorities when he saw the graffitti.

He described the neighborhood as a “tight-knit” community.

“I not only called the sheriff’s office but I also went down there to make out a report,” he said. “Whoever did this certainly can’t spell correctly, which kind of gives us an idea of where their mindset is. They are not very bright people.”

The man also said he’s spoken to the business owners on numerous occasions.

“I always wave to him when I drive by and I have spoken to him on several different occasions,” he said. “He’s got a business and he’s just trying to make a living like all of us. Something like this is just senseless and it’s a bad reflection upon our community. One of the neighbors here said she doesn’t even want to drive down the street just because the graffiti is so insensitive and vulgar.”

As a result of the vandalism, the man said the neighborhood is on alert for anything that looks suspicious.

“I can tell you right now that all eyes are on this neighborhood, so everybody is watching,” he said. “The guy’s just trying to make a living out here. I don’t know why this happened unless he upset somebody or something like that.”

Here is a link to the council’s press release: http://bit.ly/2aGbrb5