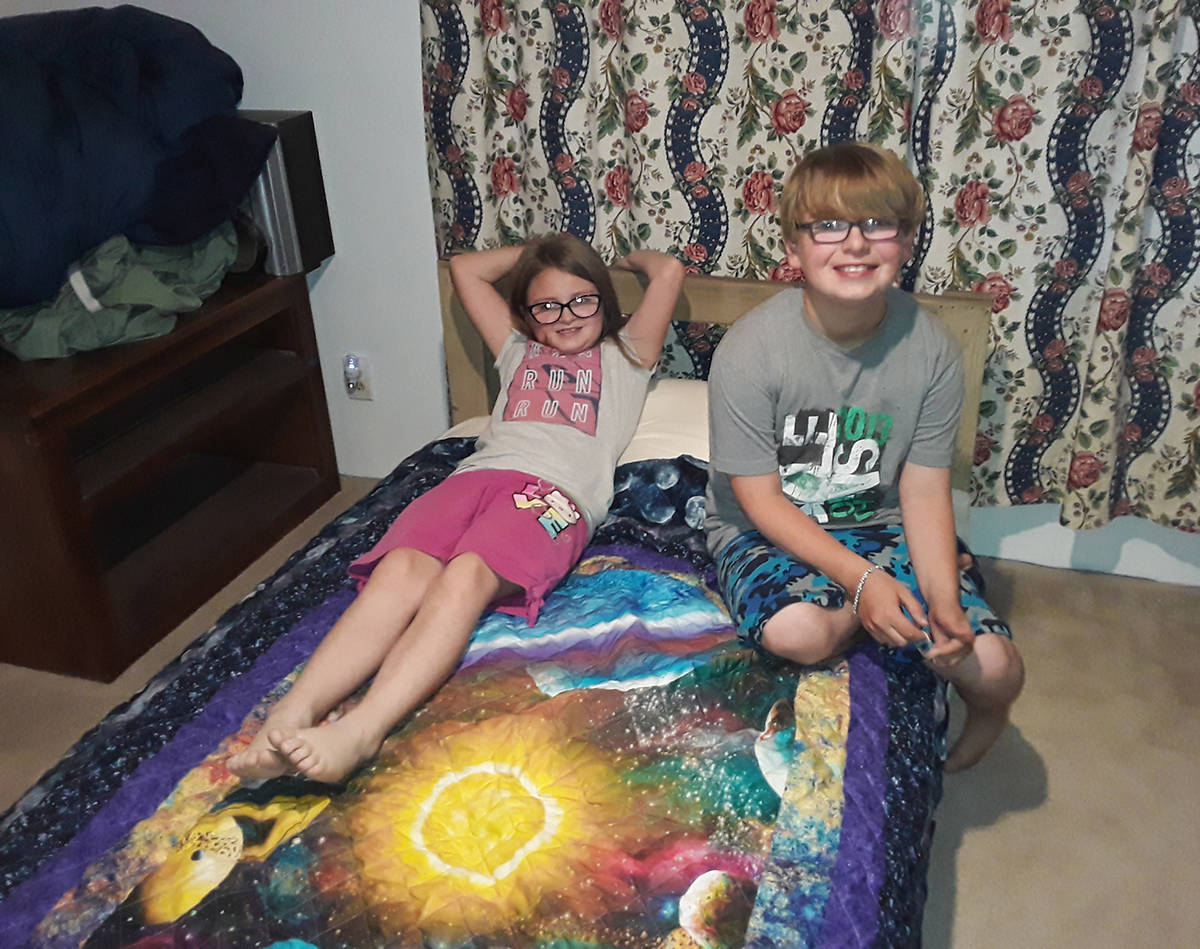 Selwyn Harris/Pahrump Valley Times Taylor Burson, at left, is joined by her brother Devin, after they both received new beds courtesy of the local Sleep in Heavenly Peace chapter. Devin, who will turn 11 in September, recently created a replica of the Titanic passenger ship, while Taylor, who turns 8 in December, said she loves horses. 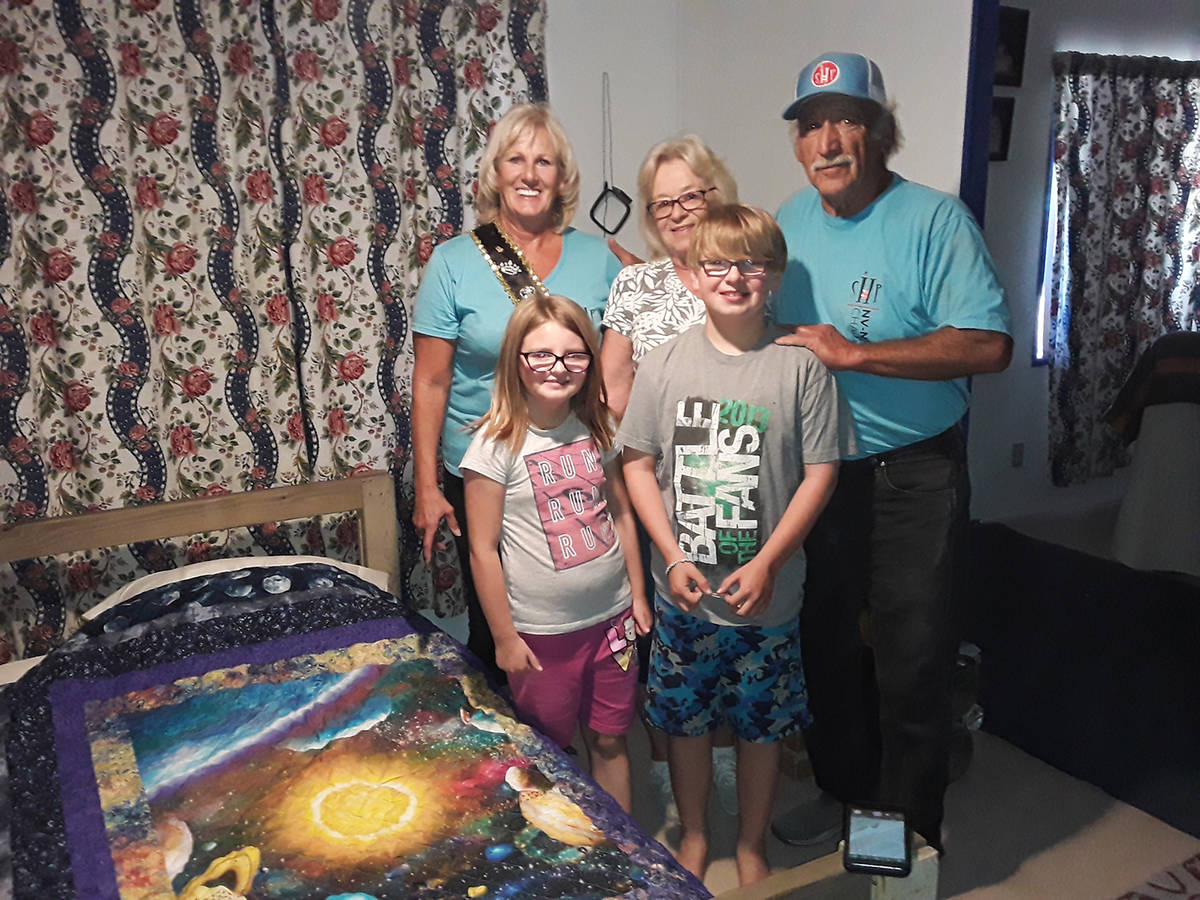 Thanks to the efforts of a local non-profit organization, two Pahrump youngsters will no longer have to sleep on the floor of their home.

The national organization, Sleep in Heavenly Peace, consists of more than 200 chapters and thousands of volunteers committed to advancing awareness of their endeavor to get kids off the floor when it’s bedtime.

Pahrump resident Carmen Murzyn, the chapter president for Nye County, said there are too many kids who actually have to sleep on the floor of their homes because they don’t have beds.

“I’ve seen some really sad stories,” she said. “Some of them sleep on floors, sleep with their parents or even on baby mattresses or the couch. Some families are really worse off than others. They don’t know where their next dollar is coming from. All of the families are very grateful and happy to receive these beds. Some of the kids we visit are in tears because they are so excited to get their own bed. It’s great to see how excited they get.”

The application process for receiving the beds is simple, Murzyn said.

“The families log on to shpbeds.org where they can request to become a recipient,” she said. “They fill out a form stating the child’s age and their need for beds. It then goes to the national headquarters and eventually comes back to me.”

It should be noted that there is no charge for the beds.

“My mom found this organization online,” Burson said at the time of the delivery. “I have two kids and we are very grateful for this and it’s going to be tremendous for us. My son sleeps with his grandma or he’ll sleep on the floor in my room. My daughter sleeps with me, or on the floor as well. I am not working because I am disabled and I’m waiting for my Social Security decision.”

As a 2019 Ms. Senior Golden Years contestant, Murzyn chose Sleep in Heavenly Peace as her platform.

She finished as first runner-up after all was said and done, and eventually worked her way up to become chapter president of Sleep in Heavenly Peace.

“I never knew I was going to turn out to be the president,” she said. “I got involved with it and I believed in it. I was homeless one time myself and I know what it’s like, so I think it was my time to pay it forward. It’s very rewarding when you walk in a home knowing that you can help get these kids off of the floor and in a bed in order to get a good night’s sleep.”

Additionally, Murzyn acknowledged all of the support she’s received since her time with the organization.

“Gary Bennett was the one who got it going and now he’s my vice president,” she said. “I have a bunch of team members that he did not have. But since being in the pageant, I have met a lot of people that are good for this organization. I have a core team and excellent people on my board. I have someone to help out with finances and I have someone to help with social media. I have people to cover all of the different aspects of the organization. I’m really excited about it.”

Murzyn also noted that the COVID-19 outbreak has forced her to alter some of her activities with the organization.

“It’s too bad the virus came because it’s going to make it really hard for us,” she explained. “I serviced about 13 families before the virus started, and I have another 15 to go coming up. We are always looking for donations to buy more beds so we can continue this. It’s all done by volunteers and donations only.”

Murzyn also made sure to mention some of the area organizations which have contributed to her cause, including the Moose Lodge, the Rotary and Kiwanis Clubs.

“We have also received donations from CoreCivic, Shepherd of the Valley Lutheran Church, and the Bearded Lady bar provided donations,” she said. “The Shadow Mountain Quilters are wonderful, because they are constantly supplying quilts for all of these kids. The Silver Tappers held a benefit show to help us out too.”

Murzyn mentioned the organization has scheduled an event known as “Beds Across America” come September.

“It used to be in June but because of the virus, they put it to September 26, which involves the whole community, where they come out and help make the beds,” she said.

For additional information on applying for beds or to become a volunteer, call Murzyn at 775-910-8921, or logon to shpbeds.org

“They need to request Nye County, so that way it will come to us locally,” she advised.