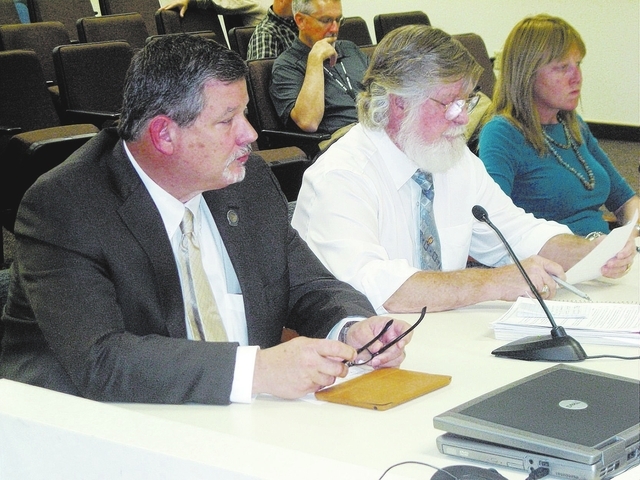 The drafting of a Pahrump Basin groundwater management plan is so controversial, just the composition of the members drew a lengthy discussion at the Nye County Commission meeting Tuesday amid fears by some it will be dominated by local utility companies.

The state engineer caused some alarm in October 2012 when he told a crowd at the Bob Ruud Community Center he had the right to apportion water rights in Pahrump Valley by date of priority if a groundwater management plan wasn’t drafted. The designation of critical management areas to address the over-appropriation of water was authorized under Assembly Bill 419 passed in the last session of the Nevada Legislature, a groundwater management plan would avoid that designation.

The final conclusion was there wouldn’t be a limit of seven members to the board, at the request of Nye County Manager Pam Webster, who said it could include as many as nine. The plan will make recommendations about bringing the over-allocation of water rights, currently 62,000 acre feet in Pahrump Valley, into balance with the perennial yield, estimated at 12,000 acre feet. Options will be recommended for conservation, future planning, utility service and water use by residents.

Utilities Inc. of Central Nevada Regional Director Wendy Barnett said the issue of water and water rights are community issues that will impact everyone in the Pahrump Basin. UICN had an annual diversion of 3,625 acre feet of water rights according to 2010 estimates, serving a population of 10,821 residents.

“Every individual of this community should be individually doing everything they can to protect this valuable resource,” Barnett said.

She said Nye County and the individual water utilities have water conservation plans. UICN has rebates for installing water efficient toilets and washing machines, as well as salt cedar eradication. She said residents should install only native plants and think about water on a daily basis when brushing their teeth, taking a shower or washing their car. There are inexpensive water savings tools like shower heads.

The difference between the paper water rights and the perennial yield was the equivalent of 45 million gallons of water per day, Barnett said.

“But we keep punching holes in the basin for new wells, letting water run down the street, planting lawns and leaving the water on when we wash our car,” she said. “I’d like to encourage the Board of Commissioners to consider very carefully who should be on this advisory committee. Rather than choosing representatives from various interest groups or entities with larger pieces of the water rights pie, select people who you believe understand the complications of water rights law who can put the plan together to gather the accurate data we need and can fairly advise on the administration of water rights for everyone in this community.”

Commissioners debated whether each of the three private utilities should have seats on the board: UICN, Pahrump Utilities Company and Desert Utilities. The suggestion was to allocate seats for the other four positions to a representative of land developers or builders; one seat for domestic well owners; a seat for local business owners and another for a local water expert. The Pahrump town board, the Nye County Water Board, the Nye County Regional Economic Development Authority, Nye County planning and public works departments could have liaison positions providing input.

The county commission intends to advertise for applications through Dec. 10, with appointment of members at the Dec. 17 meeting.

Resident Dave Caudle questioned why the Nye County Water District, created after passage of Senate Bill 222 in the 2007 Legislature, couldn’t draft the plan. Commissioner Lorinda Wichman said she spoke with Tonopah Town Manager James Eason, who serves on the water board, who pointed out it’s composed of representatives from throughout Nye County, the committee drafting the Pahrump groundwater management plan should be strictly from Pahrump.

Caudle suggested three seats for well owners to be selected by a cut of the cards. There are 11,100 wells in Pahrump Valley.

“This makeup is grossly unfair and unbalanced. Certainly this valley has more residents with domestic wells than are being served by the utilities. I suggest only one seat be allocated for the utilities and they can select who will be on there,” he said.

Wichman asked if the three utilities could be represented by one member.

“We are different utility companies and have different viewpoints. No offense to Wendy, she has a multinational company that oversees her. She would have to have them oversee her. As for me, I report back to my family. It would be a little easier for me to get approval than Ms. Barnett,” Greg Hafen II said, representing Pahrump Utilities.

“What needs to happen we need people who can work together and get us a plan. We don’t just need bodies. We need people with some knowledge in this. Drawing a card would be fine providing the people we’re drawing from having some knowledge, not necessarily a financial interest, but we have people who are retired here who worked possibly in water rights. I think we really need to get the smartest people we can together because this needs to work quickly. This can’t be a committee that waits six months to come up with a suggestion,” Commissioner Dan Schinhofen said.

Whatever the composition of the board, county officials predicted there would be parties unhappy with the outcome.

“Everybody’s ox is going to be gored here, that’s a given. But we talk about rights, we talk about water, land owners in this valley who have bought their property and they have not developed property yet, they have a stake in this,” Nye County Water District General Manager Darrell Lacy said. “How do we make the future development match the water use in this valley?”

“A lot of the things they have to suggest, people in this room are going to be screaming about. But if we don’t think about this seriously, the state engineer is going to do it for us,” Schinhofen said.

Commissioner Frank Carbone said domestic well owners are the ones at most risk. He said State Sen. Pete Goicoechea, R-Eureka and Assemblyman James Oscarson, R-Pahrump, predict the groundwater management plan could be a model that could be copied in other problem areas of the state.

Commission Chairman Butch Borasky said he’ll be monitoring the board closely, but not micromanaging it. Schinhofen sought to allay fears the well owners would be overrun by utility companies, he said decisions won’t be made in the dark. Their recommendations will be considered by the water board and county commission before being forwarded to the state engineer.

“This is a can we cannot afford to keep kicking down the road. We have an option to do it now or let the state engineer do it,” Wichman said.