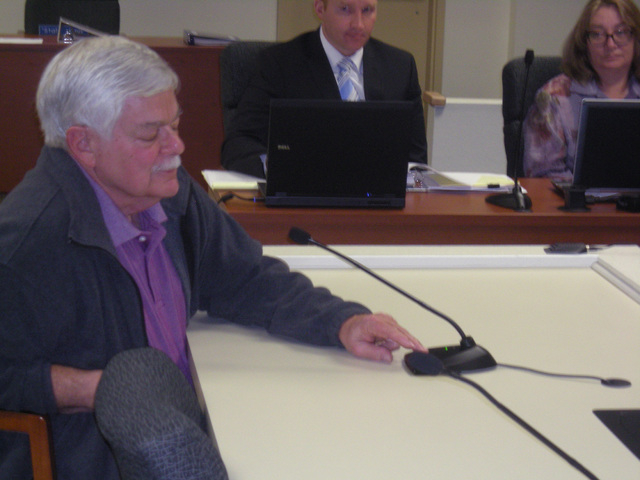 A workshop where contentious issues can be brought out in the open and hopefully get past the emotional aspects is being planned by the Pahrump Groundwater Management Plan Advisory Committee at 2 p.m., June 4 at commission chambers.

A couple of board members even suggested they be able to bring forward suggestions from residents anonymously. The board was appointed in January to help avoid listing Pahrump Valley as a critical management area by the state engineer under Assembly Bill 419 passed in the 2011 Legislature, which would allow the state engineer to regulate water rights by priority date after 10 years.

Board member Walt Kuver suggested a possible list of items for consideration. They include finding out the basis for a recent increase in estimates of the perennial water yield for Pahrump Valley from 12,000 acre feet per year to 20,000 acre feet. While Nye County Geoscience Manager Levi Kryder reported a groundwater investigation showed water levels actually rising on the alluvial fan toward the south, Kuver said the board needed to temper that enthusiasm. Kuver thinks those were based on 2005, a wet year and predicted levels will go down with drought years.

“We can’t base our long-term plan on that being a water resource,” Kuver told committee members May 22. He is urging flow model reports.

“Imported water, I personally believe, it is a false hope,” he said. “What isn’t already committed or off limits from all the federal agencies, underground, scenic waters and things like that.”

Committee members need to discuss the legalities in canceling what he calls “phantom water rights” or those that aren’t being used, in over- appropriated basins like Pahrump Valley, which Kuver said is still a property rights taking. That could also apply to denying a building permit for a lot where there’s no water, he said.

The board needs a list of water rights and those that are over-allocated, Kuver said. If the state engineer declares Pahrump a critical management area, which allows for the prioritization of water rights after 10 years, the committee needs to know which types of water rights would be affected, commercial, industrial, or municipal facilities such as schools. He said the board should consider impacts of requiring proof of beneficial use of water, focusing on “zombie subdivisions” in unserviced subdivisions.

Kuver asked if the committee wants to buy back unused water rights, to bring the number of water rights on paper more in balance with actual usage, how would it be financed? But he said, “purchase of water rights is just extortion. It’s like paying a neighborhood gang not to vandalize your car.”

The 2014 revised Pahrump master plan reduced the possible build out 41 percent from 639,000 residents in the 2003 plan to 376,000, Kuver said. If Pahrump has a perennial yield of 20,000 acre feet per year, it could support 120,000 people if there were conservation measures that would reduce average per capita water usage from 260 gallons per year to 150 gallons, he said. Kuver said that could involve restricting outdoor landscaping.

“There’s a need for growth control and it’s real painful as it is, you can call it land use management,” Kuver said. “If we ignore growth control, we can guarantee we’re going to drift into problems and disabled wells. We know it’s not a crisis now, but we’ve got to address it now.”

“We’ve got to get on with this before it’s bypassed by the pressures of development,” he said.

Kuver likes existing larger lot sizes in Pahrump, where 62 percent have domestic wells. He suggested doing away with village residential zoning with 8,000 and 10,000-acre minimum lot sizes, in an effort to reduce future parceling. That would mean a minimum lot size of 20,000 square feet. Pahrump Valley doesn’t need another 19,000 lots in high density subdivisions.

“I believe we should reconsider all existing subdivision agreements, take them at a minimum to a VR-20 density,” Kuver said. “They all have escape clauses under water availability.”

“A supporting ruling from the state engineer saying there’s no water available would probably be required,” he said.

Other growth control topics may include deciding where Pahrump wants to grow, Kuver said. “Regrettably the non-buildable lots probably have to stay non-buildable. At least the buyers knew it,” he said. Lots not serviced by a water and sewer utility that are smaller than one acre don’t have room for a well and septic.

Kuver said if the remaining 8,500 lots where domestic wells could be drilled would be developed, based on Nevada Division of Water Resources estimates of only a half-acre foot in usage, or 188 gallons per day, that would still consume another 4,250 acre feet, which can’t be sustained.

“We might impose restrictions on outside usage if that’s where the problem is,” he said.

A 2006 adequate public facilities plan could be reviewed, Kuver said, which envisioned the highly emotional topic of a municipal water and sewer system. At the time it was to address concerns over septic contamination of the groundwater, he said, but it doesn’t matter if there isn’t enough water to distribute.

“I want to be able to submit every idea I’ve heard all over town,” she said. “I don’t want to necessarily say I’m promoting this idea. But I think if it’s out there then maybe we can discuss it, so an idea that doesn’t have merit maybe does have merit after we brainstorm it.”

Water District General Manager Darrell Lacy wants to get all ideas on the table. He said factors like cost, legalities, difficulties and community acceptance have to go into the evaluation process. Some suggestions will probably require studies by county staff or the Division of Water Resources to come up with final numbers, he said.

“In a few of these cases the numbers don’t add up. I guess it doesn’t take too much of a rocket scientist to figure out we don’t have enough water for half a million people. At some level we have to figure out what is that target number and try to figure how we’d get there,” Lacy said.