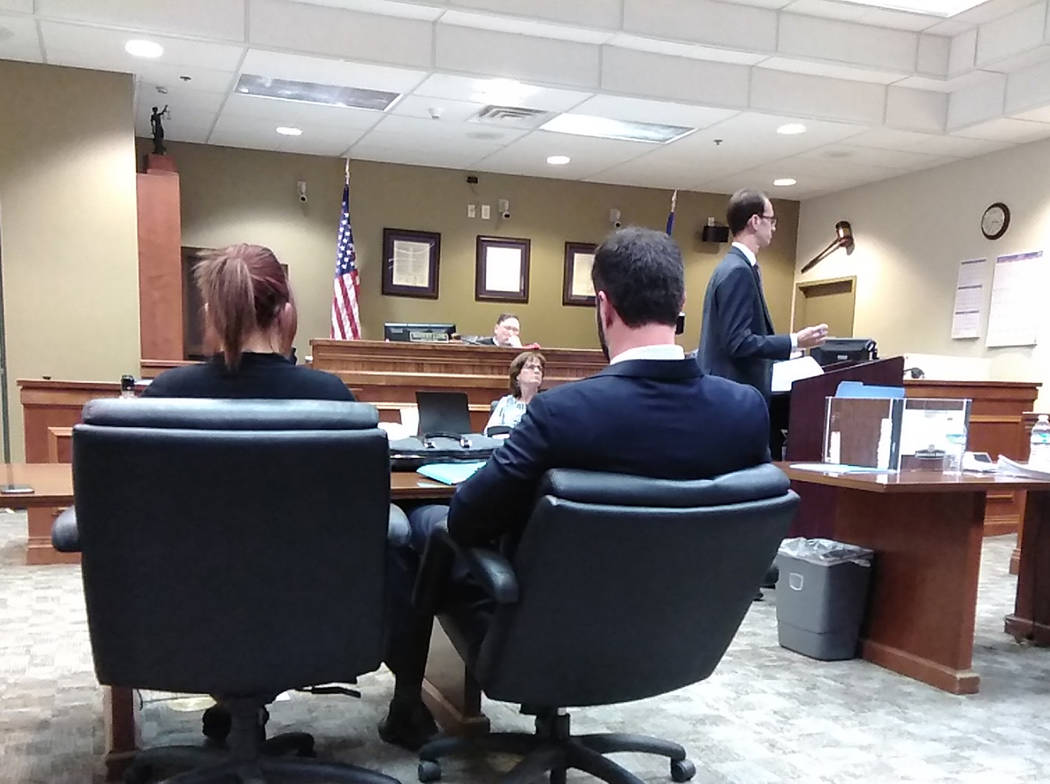 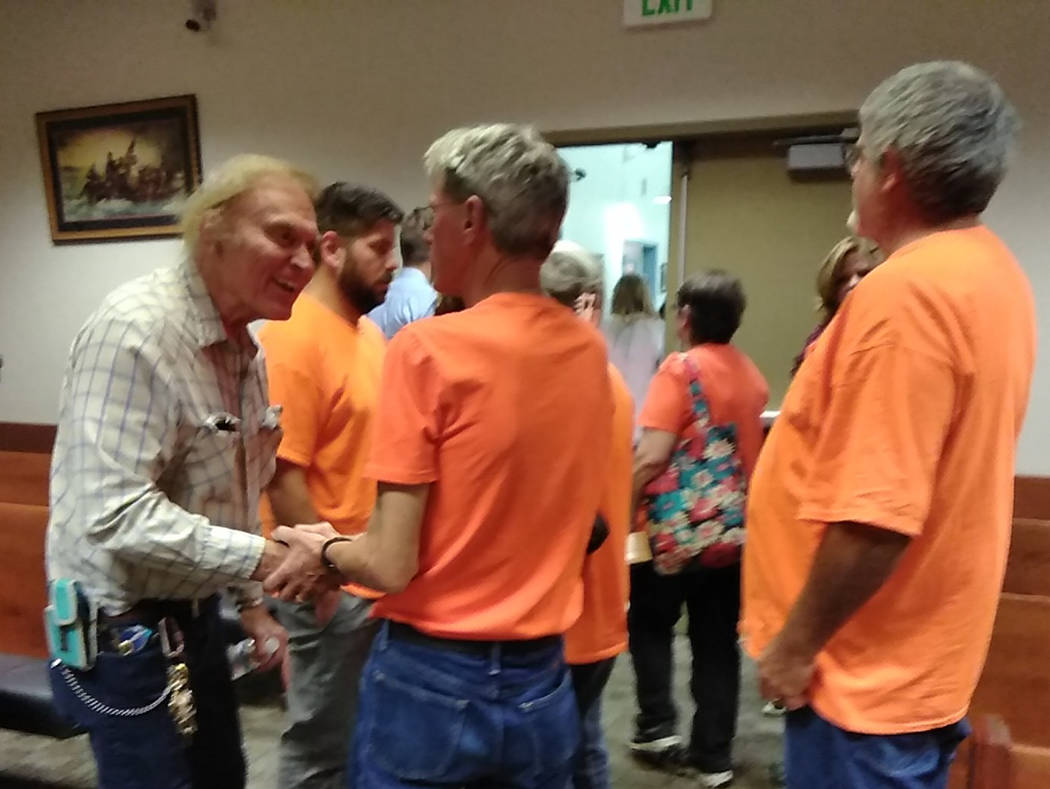 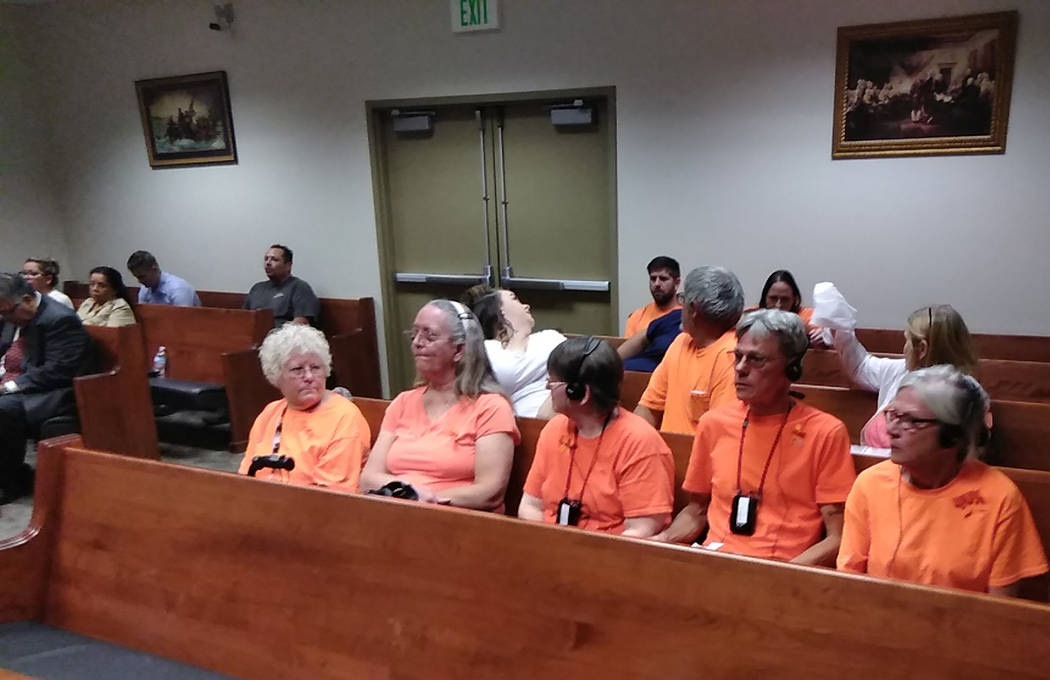 Selwyn Harris/Pahrump Valley Times Family and friends of Christina Weir wore orange shirts and ribbons in her memory during the trial, as orange was Weir's favorite color, her father Jim said following the verdict. 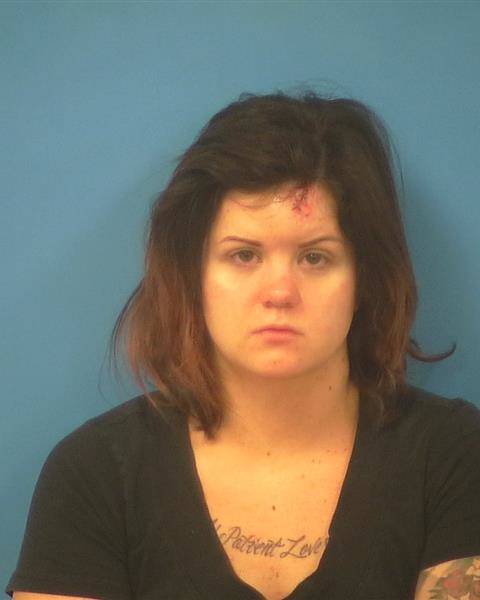 Guilty on both charges was the verdict returned for Ashley Winn, the Pahrump resident who after a night of drinking back in 2016, ran a stop sign and collided with a vehicle at the intersection of Dandelion and Honeysuckle streets, according to the Nye County District Attorney’s Office.

The violent crash killed local resident Christine Weir, 33, and seriously injured Weir’s fiance, Brian Choiniere, who was driving Weir to her job at Walmart in the early morning hours of Sept. 24, 2016.

Jurors deliberated for close to three hours before making their decision.

“Over the course of this trial, you have seen irrefutable evidence of this defendant’s guilt,” Vieta-Kabell told the jury, during his 20-plus-minute argument. “On September 24th, 2016, this defendant decided to get lit, get buzzed, get drunk and have a good night out on the town. This defendant hit multiple bars, drinking whiskey all along the way.”

Vieta-Kabell also informed jurors that under the law, when someone is charged with driving under the influence of alcohol, causing substantial bodily harm or death, there are specific elements that must be proven beyond a reasonable doubt in order to convict the defendant.

“For the charge of the death of Miss Christine Weir, I must prove Christine Weir died,” he said. “I assert to you ladies and gentlemen of the jury, there is no doubt in this regard if you review the evidence in this case. Looking at the evidence, you will have the autopsy report of Miss Weir where it states the cause of death, which was blunt force motor vehicle trauma. This is also supported by the testimony of our witnesses. As we know, Christine was fine. As fine as you can be when you are driving to your morning shift at 3:55 a.m., and by all accounts, she was happy, driving with her fiance up Dandelion Street. Then, as we now know, Christine met her demise at this defendant’s hands.”

Looking for the facts

During Vander Heyden’s closing argument, the defense attorney imparted a story relating to his family and a trip to a Las Vegas retail store.

“My wife, my three-year-old daughter and I decided to take a shopping trip to Costco, and no shopping trip to Costco is complete without going to the kids’ book section. My daughter happens to be obsessed with doggies and horsies at this point in her life. We see a doggie book called “Hide and Seek Doggy.” You open up the pages, and a dog pops out of various objects in the book.”

Vander Heyden went on to say what happened when he began reading the book to his daughter while attempting to make the point that sometimes facts don’t necessarily lead up to the right conclusion.

“We get to the last page of the book, and the doggies pop up, but all three of the dogs’ heads are missing,” he said. “I was in shock because we just got the book eight hours earlier, and I asked my daughter what happened to the doggies’ heads? She looks at me with a serious expression and she told me Bubba, my 12-year-old stepson, ripped them off.”

As jurors listened intently Vander Heyden continued with the story.

“I told her there was a little problem with the story because Bubba has been in Idaho for the past week-and-a-half with his grandparents,” he noted. “I was thinking in my head that the facts don’t add up. I had to take her word for it and we continued reading the book without the doggies’ heads. Why is a defense attorney telling you this story? The real story is the facts that my daughter gave me, just didn’t add up to the conclusion.”

Following a brief rebuttal from Vieta-Kabell, Judge Lane reviewed the document containing the jury’s decision of guilt or innocence.

Lane then handed the document to court clerk Rachel Aldana, who read aloud the verdict.

Following the verdict, family and friends of Weir and Choiniere expressed relief as all exchanged hugs while thanking prosecutor Vieta-Kabell.

Weir’s father Jim shared his feelings of the trial and the aftermath.

He, along with others, were wearing orange shirts and ribbons as a gesture of solidarity and remembrance for his daughter, as the hue was her favorite color.

“I am still sad, and the verdict doesn’t change what happened, but I’m glad justice has been served,” he said softly. “As far as what life has been like after losing Christine, I can’t speak for anyone else, but losing a child is something you can’t replace.”

Additionally, Jim Weir said he thought the state did an exemplary job in making their case to the jury.

“As I sat in the courtroom throughout last week, I didn’t think there was any questions from the start because it was a black and white case to me,” he said. “I don’t see why it had to be dragged out for close to three years. The state did a great job in prosecuting this case.”

Just outside the courtroom after the verdict, Choiniere’s father, Joseph, said he was also relieved the jury found Winn guilty.

“I am still very emotional because it’s still close to us, obviously,” he said. “They were together for so long because they met in high school. The date of the crash was very close to their wedding date, so we were all happy planning the wedding.”

Jim Weir, meanwhile, wanted to acknowledge his daughter’s former fellow employees for their support for his family throughout the entire ordeal.

“I want to thank everyone from Walmart for what they did, and everybody who kept showing up here in court,” he said. “The employees at Walmart always showed up and also helped with the funeral. They bought the urn for my daughter, who was cremated. They have just been very, very supportive. They have a great team there.”