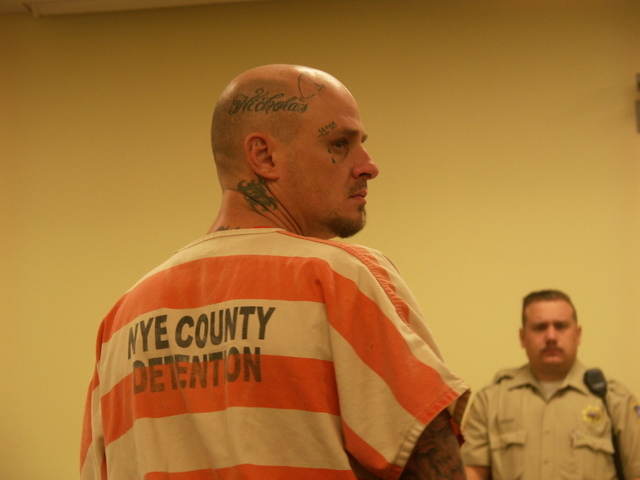 The man the Nye County District Attorney’s Office deemed a “habitual criminal” was released from custody on his own recognizance on Wednesday.

Donald McFadden, who is presently facing several drug related charges, was originally arrested and charged in connection with the armed robbery of the Kentucky Fried Chicken establishment last month, which police are still investigating.

Initially, Nye County Justice Court Judge Ron Kent did not appear to be lenient to McFadden.

“Young man, you’ve got quite a history,” Kent said. “You have failures to appear showing up on your extended record going back to 2008 and 2009. The charges are very serious and you are a two-time convicted felon. If you suffer another conviction, you’re going to be suitable for habitual offender treatment. On your trafficking charge alone, you are looking at some big time.”

According to his arrest record, McFadden has had numerous run-ins with local police, going back more than 14 years.

McFadden pleaded with Kent to give him one last chance to turn his life around.

He assured the judge that he would do everything he needed to do for his release, while acknowledging his family in the audience.

“I’m not going to run nowhere, I’ve got nowhere to go,” he said. “I have no family anywhere but right there. If I leave where am I going to go? I have nobody.”

Additionally, McFadden said if released, his main focus will be securing employment and remaining clean and sober.

He told Kent he could possibly get a job working for his uncle.

“Nobody will even talk to me, but I’ll struggle every day to find a job out there,” McFadden told Kent. “If you release me on my own recognizance, I’ll take drug tests every week and I’ll go on house arrest. I’ll do anything to get the opportunity to go to work and show you that I’m not the monster that everybody’s painting me.”

Kent also inquired whether McFadden had a place to stay if he was released.

“He will stay at my house your honor,” McFadden’s mother Carolyn declared from the audience. “I have a clean environment at my house. I don’t allow drugs in my house and he knows that. My son’s friends are not allowed because I have to draw a line too your honor.”

McFadden’s appeal for leniency was enough to persuade Kent to release him on his own recognizance with the promise to appear at his next court date to face his charges.

He said he would enter into a drug abuse program at the WestCare facility in Pahrump as soon as he can.

An audible sigh of relief filled the courtroom from McFadden and several family members when Kent ordered his conditional release.

The conditions include no further contact with law enforcement as well as making all court appearances. McFadden agreed to stay away from alcohol and drugs.

“Over the state’s opposition which is well taken, I’m going to go ahead and give you an O-R and that’s on me,” Kent said. “Don’t betray my goodwill towards you. If your mother submits anything to the court about you being a problem and breaking the rules, I will yank your O-R. Right now, you own the key to your jail cell young man.”

“Judge Kent is a very fair man and I respect that in him,” she said. “I don’t know him personally and it’s the first time I’ve seen him, but I’m very grateful for what he did for my son.”

Additionally, McFadden said her son’s reputation has been harmed by recent media reports related to his arrest on the KFC armed robbery, a crime he was arrested for but not charged due to an unreliable confidential informant.

“My son and his girlfriend have been all over the news,” Carolyn McFadden said. “My family has been slandered through all of this on things my son really didn’t do. I have other siblings in my family who have lost jobs they were trying to get because of the McFadden last name. I’d like to take my family and move the heck out of this town, but I can’t because they’re all wrapped up in the system.”

McFadden also spoke about her son’s previous run-ins with the Nye County Sheriff’s Office and an upbringing that she suggested was less than favorable.

“The kids been institutionalized and he is on a third strike right now and I don’t want to see him take that third strike for something he didn’t do,” she said. “I know he has a drug history and I consider him my son, but he’s technically my stepson. His biological mother lives in California and he got in trouble when he was 12 years old with her. My husband and I got him out of a group home when he was 18.”

McFadden’s girlfriend, identified as Stacie Ann Johnson, also appeared before Kent, as both share the same charges for the sale of crystal meth according to the sheriff’s office declaration of arrest.

The report stated both McFadden and Johnson were “operating partners” in meth sales.

The report said several purchases were on a video of photographic surveillance.

“Donald McFadden only presented himself for two of the four purchases but he played a substantial role in all four transactions, in either his presence for the sale or in helping to arrange transactions,” the report stated in part.

Both McFadden and Johnson will return before Kent on March 12, 2015 for a pre-trial hearing in Justice Court.