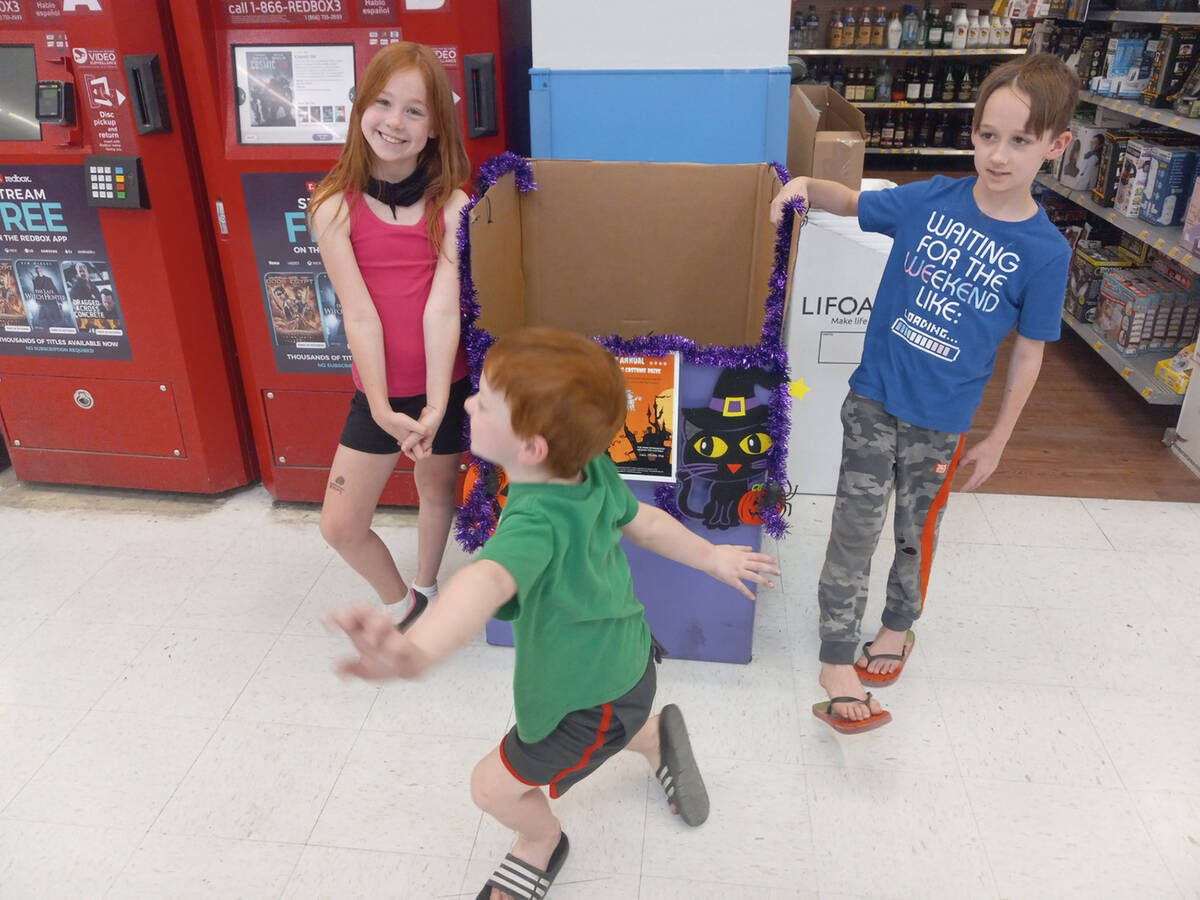 Special to the Pahrump Valley Times From left to right, this photo shows Cayleigh, Conner and Caden Dragna, who are helping their mom, Shauna “Shay” Dragna, with a Halloween Costume Drive. 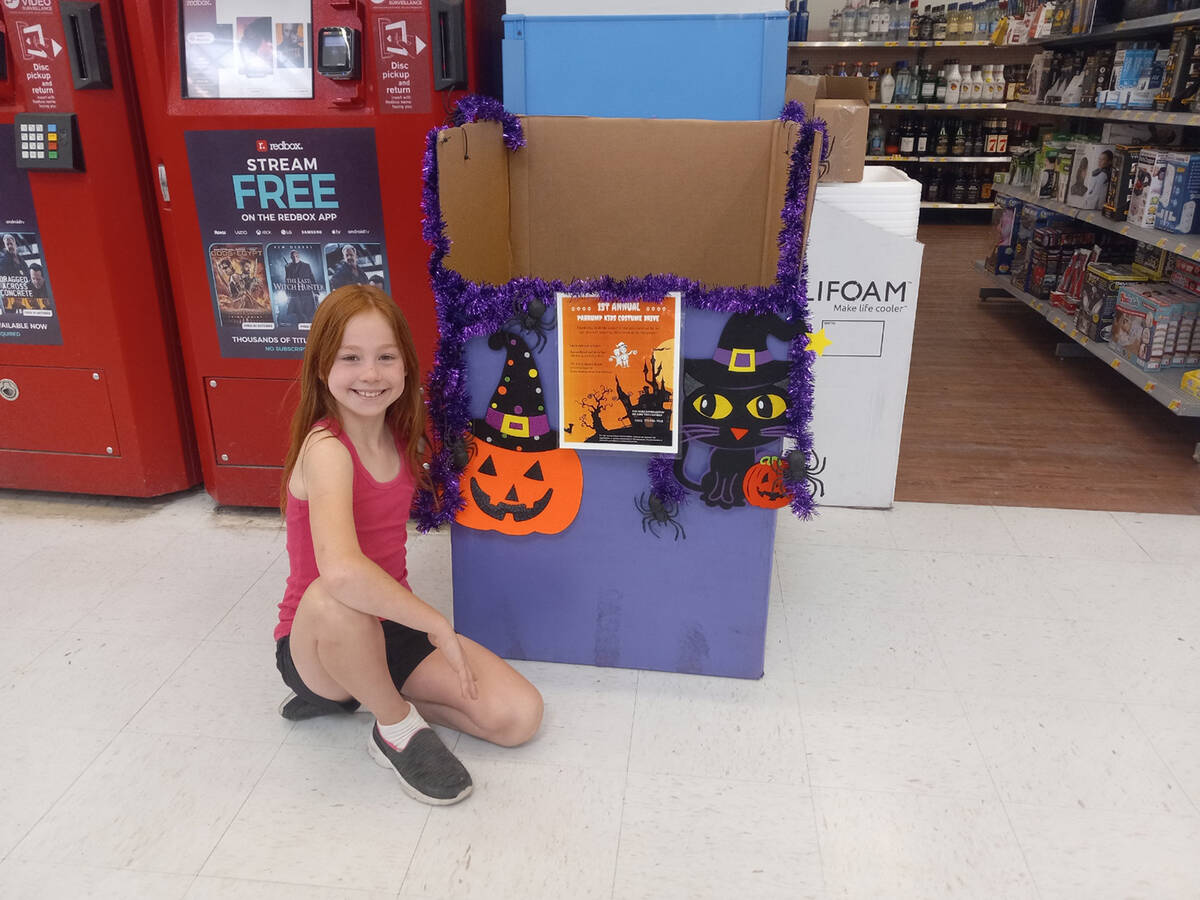 Special to the Pahrump Valley Times The Halloween Costume Drive donation box is located inside of Walmart next to the Redbox machines.

Having essentially to restart her life and that of her family over from scratch, Pahrump community member Shauna “Shay” Dragna has plenty of things to take up her time right now but still, she is making the effort to do a little something special for others.

“On a personal level, my children and I have recently gone through some pretty crazy hardships and we’re pretty much in a rebuilding phase,” Dragna told the Pahrump Valley Times. “And one day we were driving across town to pick up a donated boxspring that someone had given us, because we didn’t have a lot of furniture, when this idea just popped into my head. I was thinking about, what are we all going to be for Halloween? And then that immediately became, what if there was a Halloween costume drive for families in need?”

Not having any experience with hosting such an event did not dissuade Dragna and her children from seizing on the random thought and turning it into something that is now gaining momentum as the days go by.

The first step for Dragna was to create a very basic flyer to advertise that she was going to host the costume drive, which she posted to Facebook. Social media responses started coming in and a member of Dragna’s church reached out to offer a different, better composed flyer for Dragna to use. Several more women then jumped in to offer their help with printing the flyers and little by little, others have gotten involved as well. “It’s kind of taken on its own direction now!” Dragna enthused.

“I’ve always had a really strong desire to serve, I’d like to one day build a nonprofit of some sort so this is just a baby step in that direction,” Dragna explained. “I’m putting the feelers out there and trying to do something that can help. There are already lots of drives for Christmas gifts and places for abused women to get help, things like that, so doing something for Halloween seemed like a good idea, because it’s a niche that’s not really covered by anyone right now.”

In order for Dragna and her three kids, Cayleigh, Caden and Conner, to be successful in their endeavor however, fellow residents are needed to provide the donations that will then make their way into the excited hands of youngsters whose families may not otherwise be able to afford to fit them out for Halloween.

“My thoughts are for costumes from baby to middle school age, but if I get larger ones coming in, I will make sure to distribute them somehow!” Dragna said.

To make the donations process as easy as possible, Dragna and her kids have decorated a large box and placed it inside of Walmart, where there is a wide selection of Halloween costumes ready for purchase by those who feel a desire to help out. The donations box is conveniently located next to the store’s Redbox machines and any and all costumes that are added to the box will go a long way toward making Halloween a “spooktacular” holiday for local children.

In addition to the donations box at Walmart, Dragna is getting a helping hand from a local business that will be sponsoring a free hand-wash car wash for anyone who stops by the event to make a contribution to the Halloween costume drive.

“I met with Stephanie from XPress Detail and Auto Spa and she is going to host a free hand-wash car wash for anyone who brings down a costume donation,” Dragna said. “We’ll have hotdogs for donors to enjoy while they wait as well. It will be an exterior hand wash and wax and that will take place on Saturday, Oct. 9 from 11 a.m. to 2 p.m. at XPress Detail and Auto Spa at 980 Pahrump Valley Boulevard.”

Once Dragna has gathered as many costumes as she possibly can, she plans to host a Halloween party at XPress Detail and Auto Spa during which the costumes will be distributed. That event is set to take place on Saturday, Oct. 23 and full details will be announced some time next month.

For more information on the Halloween Costume Drive, to contact Dragna to assist with the drive or to request to be added to the list of families to receive costumes, visit her Facebook page by searching for “Shay Dragna” or call her at 775-990-7918.