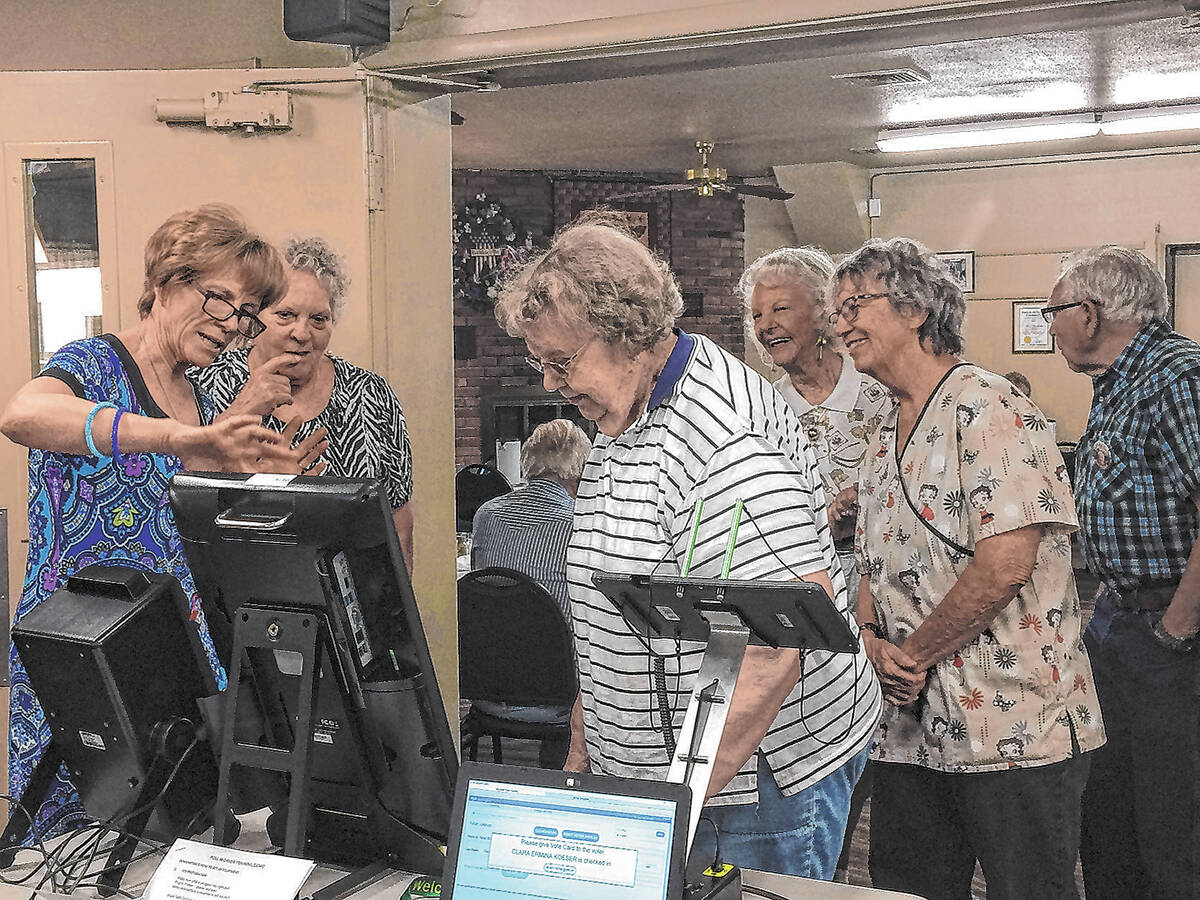 Robin Hebrock/Pahrump Valley Times file Former Nye County Clerk Sam Merlino shows voters how to use new electronic voting equipment in 2018. This year, the Nye County will move to a largely paper-ballot and hand-counted election model that has seen a number of legal challenges.

But local election officials say they’ll revamp their plans and seek approval from the Nevada Supreme Court to commence the count soon.

“[Thursday’s] Supreme Court order requires us to make some changes to our hand-count process,” Nye County officials said in a statement issued Friday that promised to “resume as soon as our plan is in compliance with the court’s order and approved by the secretary of state.”

More than 8,600 voters have already cast early ballots in Nye County for the 2022 midterm elections, according to a county spokesperson, who reported that through Monday, 2,249 voters had done so in-person at early-voting polls, while another 6,097 voters had submitted mail-in ballots.

Local volunteers spent hours Wednesday and Thursday hand counting hundreds of mail ballots before the court issued a unanimous three-page opinion siding with objections raised by the American Civil Liberties Union of Nevada to how they were tallying votes this election cycle.

On Wednesday, The Associated Press and other observers — including some from the ACLU — reportedly watched as volunteers were split into groups in six different rooms at a Nye County office building in Pahrump.

Some teams spent about three hours each counting 50 ballots, according to reports from the AP.

Mismatches — where all three talliers in a group couldn’t reconcile the votes for a candidate — led to recounts, which delayed the process, according to reports from the AP.

“My group did 100 ballots in 3.25 hours,” Kameron Mitchell, who serves as a volunteer on a ballot-counting team in Pahrump, told the Pahrump Valley Times.

While Mitchell and other vote counters took a sworn oath to not disclose any preliminary results, the ACLU claimed in its lawsuit that Nye County officials were failing to prevent the public release of early results before polls close to in-person voters on Nov. 8. The nonprofit, which advocates for civil liberties, argued that reading candidates’ names aloud from ballots within hearing distance of public observers violated a lower court ruling. The Supreme Court of Nevada agreed.

Ballots cast early — in-person or by mail — are typically counted by machine on Election Day, with results released only after polls close. In most places, hand counts are used after an election on a limited basis to ensure machine tallies are accurate. But Nye County commissioners in March urged the clerk to hand-count all ballots amid complaints by residents echoing nearly two years of conspiracy theories related to voting machines and false claims that the 2020 presidential election was stolen from former President Donald Trump.

The commission’s decision partly prompted the longtime county clerk to resign earlier this year. Kampf was appointed to replace her as interim clerk and will appear on the ballot this year as the GOP candidate for county clerk.

Kampf plans to use Dominion voting machines as the main vote tabulators for this election, but has floated the idea of scrapping the machines in future elections. The effort to begin the hand count of mail ballots is a nod to the time the process takes and a bid to meet a state certification deadline on Nov. 17.

Nye is the most prominent county in the U.S. to change its vote-counting process in reaction to the conspiracy theories despite no definitive evidence of widespread fraud or manipulation of machines in the 2020 election, including in Nevada.

Statewide, more registered Democrats have turned out than Republicans to cast ballots in the midterm elections.

According to the Nevada secretary of state’s office, 119,282 Democrats cast their ballots through Friday, which marked the end of the first week of Nevada’s two-week early voting window, compared to 110,101 Republicans. That’s an advantage of about 9,200 voters for the Democrats, which is about a 3.1 percentage point lead of the ballots cast, 40.4 percent to 37.3 percent.

As of the end of the first week of early voting Friday, 20.1 percent of Democrats and 20.2 percent of Republicans have cast their ballots.

With the partisan vote being so close, nonpartisan voters are going to play a huge role in determining the outcomes of those key races. So far, just less than 50,000 nonpartisans have voted as well, which makes up about 16.7 percent of the total vote and about 9.3 percent of all registered nonpartisans in Nevada.

All but one of Nevada’s 17 counties were included in the secretary of state’s tallies, with Pershing County being the lone exception. The secretary of state’s office did not immediately respond to questions about why Pershing was not included. But that omission wouldn’t have a large impact on the overall numbers, as there are just about 3,100 total registered voters in the rural county.

How does this compare to previous elections? It’s hard to say. Nevada switched to a system where all active registered voters are mailed ballots as a response to the COVID-19 pandemic in 2020, and the Democrat-held Legislature made the change permanent in 2021.

The first year with mail ballots happened during both a presidential election, which typically draws far more voters than midterms, and during a pandemic.

While there was no universal mail-ballot system in 2018, the vote totals through the first week of early voting in that year’s midterm elections are fairly similar to what Nevada is seeing this year.

Colton Lochhead and the Associated Press contributed to this report.