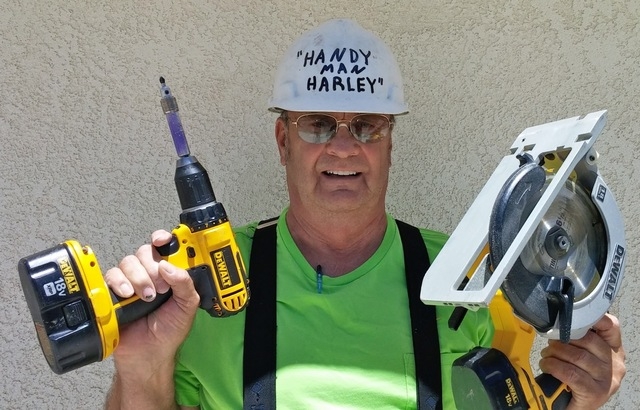 An Idaho native who transplanted to town last year is ready to tackle almost any odd job you might need carried out around your residence.

Handyman Gerald Harley, owner of Handyman Harley, brought his handyman business that he began in Idaho to town after wanting a change of scenery.

Harley, a Vietnam veteran, has been carrying out odd jobs since he was a kid. His first job was helping build a garage when he was 18 years old.

“I’ve done basic handyman stuff all my life, growing up on a ranch,” Harley said.

Harley carries out various jobs, but plumbing and electrical are not two of them. Of the services he offers, some are requested more than others in town.

“Carpenter work, broken furniture repair, moving large items, such as appliances and furniture are ones I do most,” he said.

Repairing broken furniture is his most frequent job request Harley said, with the majority of those being damaged over the years of wear and tear.

There is not much difference in his job here in Pahrump compared to his time in Idaho, with the exception of one job.

“It’s been very similar except for yard work,” Harley said. “There’s not as much lawn care to do down here and not a lot of tree trimming, also.”

When Harley moved to town last year he began advertising in local publications to get the word out that a new handyman service was in town. He began seeing a steady business flow soon after his advertisements ran.

“In about two weeks I began getting calls,” he said. “It worked pretty quickly.”

Once he started getting jobs, Harley said word spread about his reliability and price.

“That’s something that’s a tremendous help to me as customers have told me they have problems with handymen showing up when they say they will.”

Harley usually charges $15 an hour, but that can vary depending on the size of the job.

Not having a set schedule Harley said he’ll generally work any day of the week in the summer months, but once fall comes around he likes to take the weekend off for some gridiron action.

“I usually get jobs two, three, to four days a week, which is fine,” he said. “Just something to supplement my income. I generally will work seven days a week in the summer.

“In the fall and winter I usually take Saturday and Sundays off to watch college football and professional football.”

Harley was a dual businessman, as he used to run a custom saddle business, but a crime committed against him all but ended Cajun Queen Saddles.

“In October I had all my saddles stolen in Pahrump. Over $17,000 in saddles and new guns stolen,” he said. “I will still take orders for saddles, but I do not have many in stock.”

None of his stolen items have been recovered at this time.

To contact Handyman Harley for any of the services offered, contact him by phone at 208-520-3588, or via email at harleyhorses@earthlink.com.