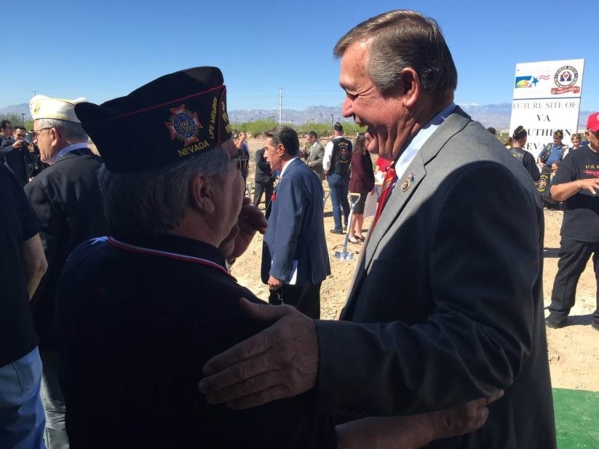 The announcement Wednesday of a new veterans clinic for Pahrump came with a heaping side of politics over how credit should be apportioned.

Republican Rep. Cresent Hardy, whose district includes Nye County, sought kudos after a $12.1 million contract award. But at the same time he raised eyebrows when he charged Democrats who also had pushed the VA to finalize the long-delayed project couldn’t get the job done.

Hardy, eager for good news as a freshman who faces a tough re-election, said that during his seven months in office, he had written a letter to VA Secretary Robert McDonald, met with regional officials and assigned staffers to engage “all levels of the VA bureaucracy.”

But at the same time he claimed credit, Hardy took a swipe at U.S. Sen. Harry Reid and at former Rep. Steven Horsford.

“Congressman Hardy’s predecessor, as well as Senator Harry Reid, had each promised progress on the clinic in years past, but ultimately could not cut through the red tape, and the project continued to languish,” Hardy’s statement said.

Reid’s office said he lobbied McDonald’s predecessor, Eric Shinseki, in 2013. In June 2014, Reid and Horsford summoned VA officials to a meeting in Reid’s office to press the agency to finalize the project. Two months later, Horsford reported McDonald had signed off to begin the permitting process, with construction to start by the end of the year.

VA officials said the project struggled through internal legal and cost issues that were finally resolved before a construction contract was announced Wednesday to an Illinois-based company, W&J Development LLC.

“He just got to Congress seven months ago. He had nothing to do with this,” Reid Deputy Communications Director Kristen Orthman said of Hardy on Twitter. She posted a 2004 Pahrump Valley Times news clip of Reid talking about a veterans clinic for the community.

Hardy’s office did not respond if he had done anything different than other lawmakers that led to success where others may have fallen short.

“Lots of people have worked on a getting Pahrump a new VA clinic, well before Nevada’s Fourth Congressional District existed,” Orthman said in a statement. “There is no question this has been far too long of a process — that’s why we continued to pressure the VA — but it should be noted that this isn’t something that was magically solved in the last few months.”