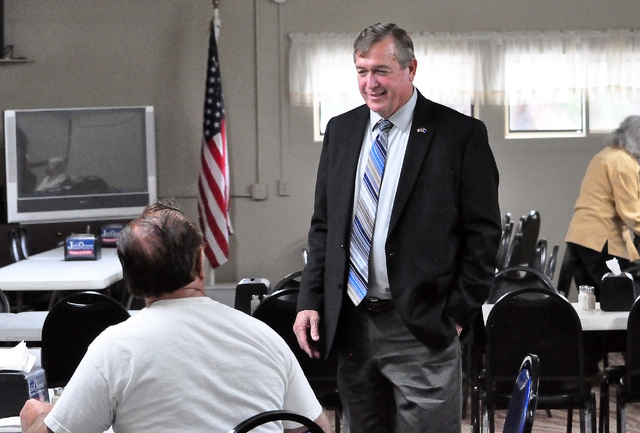 Nevada freshman Congressman Cresent Hardy made two stops in Pahrump on Wednesday, where he met with veterans and senior citizens for a round of discussion on various issues.

Hardy, who serves Nevada’s 4th Congressional District, stopped at the Veterans of Foreign Wars post early in the morning for a conversation with a group of local veterans.

Questions about the Constitution, general election, his job in Congress and veterans’ issues dominated most of the one-hour-long meeting.

“This is not a career, this is a privilege for me,” Hardy told a group of about a dozen of veterans.

“I’m a Republican in ideals, I’m a conservative individual, but at the end of the day, my obligation is to work with both sides,” he said.

The incumbent congressman also said that for the last year, his team solved 400 cases, 200 of which were veterans’ cases.

“We are working as hard as anybody out there and probably the hardest,” he said.

He also said Pahrump had done a “good job” keeping the community stirred up about veterans’ issues.

“You guys are all veterans, you served. That obligation doesn’t ever die. And you are who you are and thank you for who you are,” he said.

In a conversation focused on frustration over news coverage of this year’s general election and state politics, Hardy blasted Nevada Sen. Harry Reid filibustering laws and spoke in support of term limits.

“Term limits are great. I think they are working well in the state of Nevada,” he said.

Hardy represents over 700,000 people in Nevada’s 4th Congressional District that has a large proportion of Democratic voters.

In a separate event that took place at the Pahrump Senior Center in the evening, Hardy met with a group of local residents who voiced concerns about the BLM and Nevada politics.

Hardy has been in Congress for just over a year. He is currently seeking a second term.

“I’ve been told by my own staff that I’ve been as successful as a three-or-four-term legislator in my first year,” Hardy told the Pahrump Valley Times.

The stop marked Hardy’s second showing in Nye County in just more than a month. He hosted a veterans’ town hall meeting at the Nye County Commission chambers on Feb. 18.