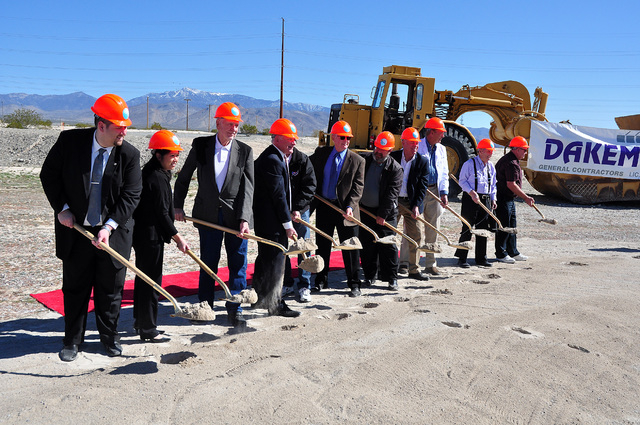 In a move that will consolidate several locations in town, HealthCare Partners Medical Group broke ground on a new facility Thursday.

The planned 58,000- square- foot building, to be located at 1397 S. Loop Road, will feature all of the services already offered to Pahrump residents and more, while bringing them together in one facility.

The new medical office building, which is scheduled to be completed in the third quarter of 2017, will provide a wide range of medical services, including primary care, oncology, cardiology, urgent care, medical imaging and testing. The facility will include eight pods with 72 exam rooms, a 1,000-square-foot pharmacy, a 2,000-square-foot Humana Guidance Center, and an urgent care center that is open 16 hours a day for 364 days a year and a coffee shop for guests’ convenience.

HealthCare President Dr. Bard Coats explained the plan has been in the works for some time now.

“We’ve been in Pahrump now for about six years and probably four years ago we began this conversation. We had six separate small facilities in town and said, ‘wouldn’t be nice to have all this in a more unified location’,” Coats said. “So we’ve been on this journey for about three-and-a-half years to get to this point.

“It’s absolutely important for us to do this consolidation.”

Coats explained that various issues made the plan go a little slower than HealthCare Partners had hoped, but all things are squared away now.

“The lease space in town, the small sites that wouldn’t be big enough for the building… to get all the people into the same location,” he said. “We looked thoughtfully and about a year ago came up with a spot, engaged a contractor, asked the process about what kind of arrangement that we needed to get this building up.”

Having five small sites now, Coats said being able to have all those care providers and specialists in one building will help create better care for all involved, as the different staff members will be able to better intermix with one another.

“This new facility will allow us to do exactly what we want,” he said. “Longer urgent care hours, more coordinated care and more concentrated services for residents of southern Nye County.”

Once the new facility is up and running, the four leases that HealthCare Partners currently has will expire, making the consolidated space the one and only site for the medical group in town.

The addition of the larger facility is just the latest step in the company’s efforts to build up the medical care available in the valley.

“The bulk of the health care delivered has grown dramatically, we’ve doubled the size of our providers, docs and other people, we’ve brought more specialists that have ever been in Pahrump and we love being able to provide that service,” Coats said. “For us to expand and do more for the community, we’re already caring for a huge chunk of them, that transformation from piecemeal medicine, a lot of individual clients who don’t talk to each other and individual doctors who don’t coordinate care and there wasn’t a lot of specialty care.

“We’re really proud that we’ve moved that along a continuum.”

Coats estimated that HealthCare Partners facilities see anywhere between 10,000 and 20,000 people and they expect that number to rise with the addition of the new facility.

“We’ll be capable with the new building and the expanded size and the way the building will be constructed, we’ll be able to serve a larger segment of the population,” he said.

The location will have an on-site pharmacy, run by an insurance company, which will eliminate the need for patients to have to travel to pick up their prescriptions.

“We’re going to have Humana have a typical retail pharmacy in the clinic.”

In addition to the pharmacy, Humana will also have a guidance center in the site to help teach residents with any issues involving their health care coverage.

“We can have counselor sessions for seniors, they can talk to them about their insurance coverage and work through any issues they have with benefits,” Coats said.

“We can also use that space after hours for community meetings. We can allow local civic groups to use it as a conference room after hours. So it will be a win-win for us and for Humana folks who live in the Pahrump area.”

The site will feature a coffee shop to allow those who are using the facility the ability to get refreshments on site, and the hope is to have a local vendor run the space.

“We’re going to start earnestly looking in March, when we know a timeline, to applying someone locally in the Pahrump area, a small business or somebody already doing something,” Coats said. “We could ask a big franchise and ask them to come into the building, but we would prefer to find somebody in Pahrump that would like for them or their family to run a small business in the building.

“It would make it very convenient for patients and visitors to come in there and have a refreshment.”

The new HealthCare Partners facility should be up and running no later than Sept. 1, 2017, Coats said.