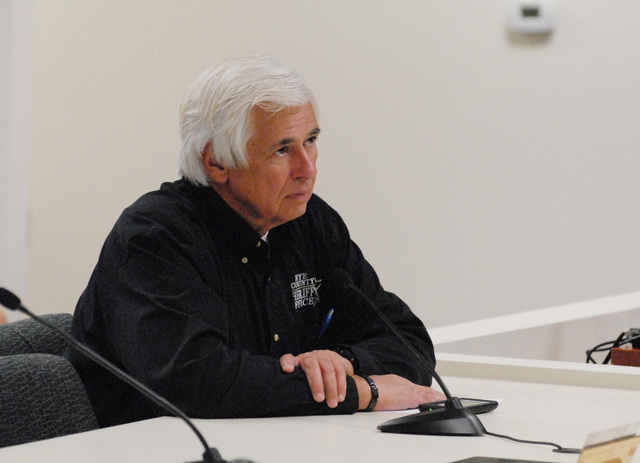 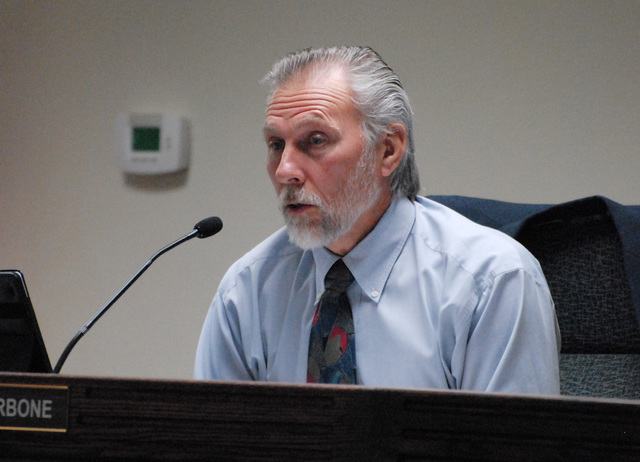 A public debate is set for Aug. 19 on a county bill requested by Commissioner Frank Carbone setting up a Nye County Peace Officer Advisory Board.

The only question Tuesday during discussion about setting up the public hearing came from Commissioner Lorinda Wichman about whether the entire 12-member panel, appointed to serve for four years, would hear cases.

Section 2.84.050 of the bill states the board will meet in panels of three members to carry out duties. Those three members will be chosen randomly by the county manager. The three-member panel may refer a complaint against a peace officer to the sheriff’s office, review an internal investigation of a peace officer and make recommendations regarding disciplinary action recommended by the sheriff’s office that could include increasing or decreasing the level of discipline or exonerating the officer. The sheriff’s office will make available to a panel of the review board any personnel files or other material for the review. The officer will have an opportunity to be heard.

Findings and recommendations of the review board panel are public record unless declared confidential by state or federal law. The proceedings however are closed to the public, according to the bill.

Review board members must be county residents and can’t be employed as a peace officer. They must complete training related to law enforcement, including policies and procedures of law enforcement agencies and employment contracts. The board may remove a member for malfeasance in office or neglect of duty.

The proposed bill states the review board won’t have jurisdiction over matters in which it is alleged a crime was committed. The board shall not abridge the rights of a peace officer granted under collective bargaining, or by a contact with any federal or state statute or regulation. The board members will serve without compensation but will be entitled to travel and subsistence allowances.

In an interview with the Pahrump Valley Times, Carbone said he brought the bill forward based on numerous complaints about the sheriff’s office, as evidenced in Internet blogs in the newspaper and comments by citizens. In particular he cited Frank Wilson, who complained under public comment at a number of county commission meetings.

At a March 18 county commission meeting, Wilson charged the sheriff’s department was out of control and nothing is being done about it. He said there isn’t an ordinance or an agenda item for an oversight board or anything else.

“It will still help us get things reviewed and understand if we’re making good decisions or not,” Carbone said.

He couldn’t say if the provision mandating panel recommendations be public would open up sheriff’s department problems.

“Something that’s confidential will stay confidential. Those will be legal issues,” Carbone said.

Sheriff Tony DeMeo told the PVT he wasn’t contacted for his input on the bill, he only found out about it last week when he saw the county commission agenda. He called the review board “a paper tiger” and said the sheriff’s department investigates its own.

“They don’t really have any authority,” DeMeo said of the proposed review board. “We’re trying to find out the leaks ourselves but when you have other individuals who have access to internal affairs reports that can kind of encourage leaking that will be problematic to any investigation. They don’t have any control over the sheriff. I’m always open to citizens’ input when they come to me, I’m more than happy to look at it and oblige but this has nothing to do with the operation of the Nye County sheriff’s department.”

“We have an internal affairs process and a confidentiality aspect of it. I’m getting complaints from the people information is leaking from the sheriff’s office,” the sheriff said. “The concern is what information they’re going to come in contact with.”

DeMeo questioned the intelligence of some people who comment on the Internet blogs.

“In a small town lack of communication is astounding. it’s really discouraging,” DeMeo said. “The sheriff is responsible by statute for the public safety of the county so I don’t know what they’re going to do.”