By Steve Tetreault and Ben BotkinSpecial to the Pahrump Valley Times
July 8, 2015 - 7:44 am 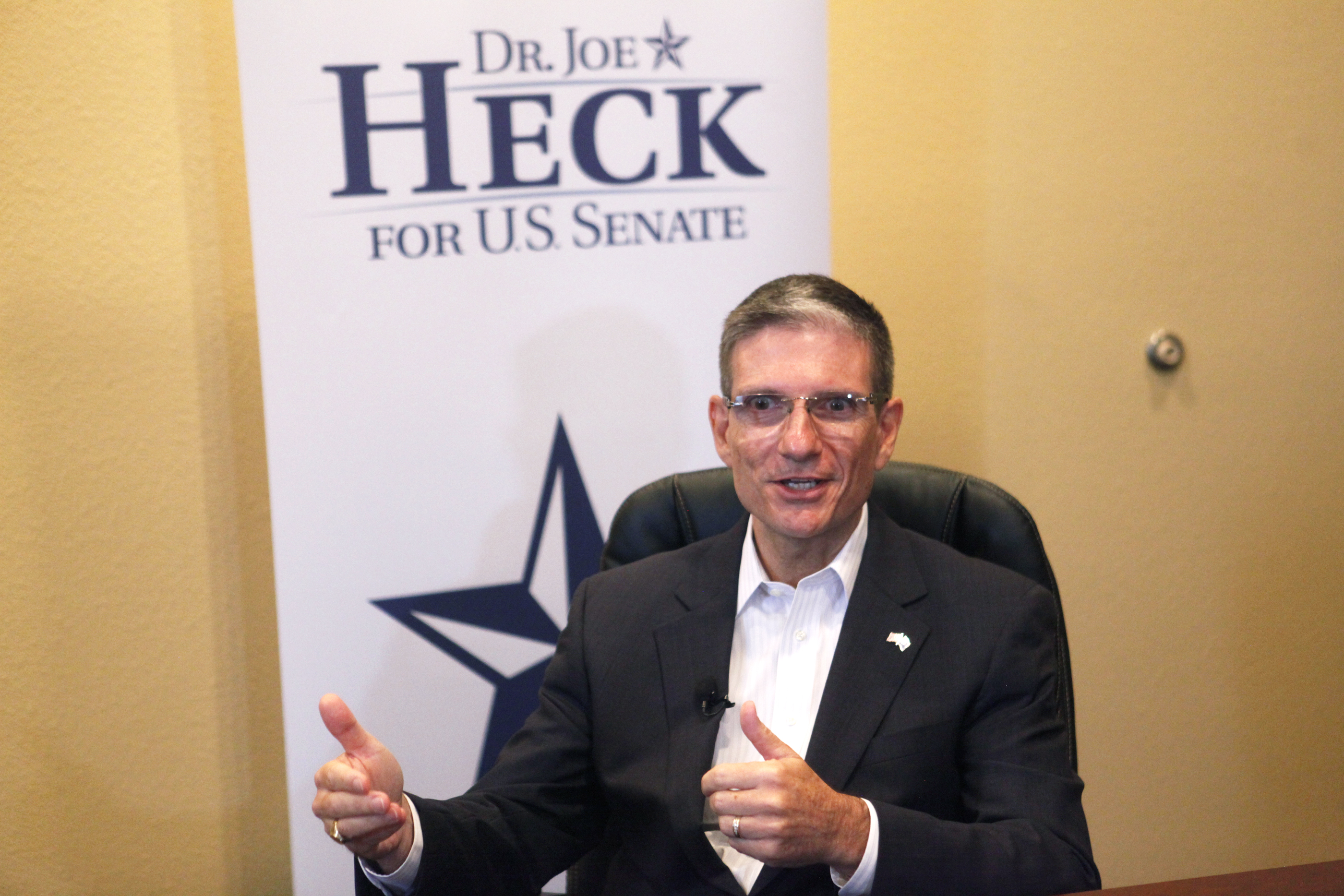 U.S. Representative Joe Heck meets with the press at Red Rock Strategies on Monday, July 6, 2015. Heck will be running for a seat on the U.S. Senate. (James Tensuan/Las Vegas Review-Journal) Follow James Tensuan on twitter @jtensuan

And while Reid won’t be on the ballot, Heck’s official announcement made it clear the former majority leader of the U.S. Senate and a force in Nevada politics for decades is still the man to beat.

“As you know, Harry Reid is one of the most formidable campaigners and fundraisers, so you know his hand-picked successor is going to be well-funded,” Heck said in an email formally announcing his long-expected candidacy. “How do we beat him? By working together, and by coming out of the gate strong. I hope you’ll be one of the very first members of my Senate campaign team, with a strong contribution of $500, $150, $50 or even $5.”

For the record, Reid’s choice for the job is Democrat Catherine Cortez Masto, a former Nevada attorney general.

The Nevada race is viewed among the top battlegrounds for control of the Senate in the 2016 elections. Republicans are defending 24 of 34 seats being put before voters, and they see Nevada and perhaps Colorado as their best places to pick up seats held by Democrats.

Masto reacted to Heck’s announcement by declaring an emergency and warning that the “attacks are on their way.”

“Everyone is texting me all at once: Congressman Heck just announced he’s running for Senate,” Masto wrote in a mass email Monday morning. “I’m heading into an emergency finance meeting now, but I know what the team will say: We need everyone — that means you — to give $5 or more right this second.”

Heck, 53, showed little interest initially in running for the Senate. But he was lobbied heavily by national Republicans after Gov. Brian Sandoval made clear he would not run.

“Whether it’s serving over 20 years in the U.S. Army Reserve, working the nightshift as an ER doctor or fighting for Nevadans in Washington, I am proud to have spent my life helping others,” Heck said in a prepared statement. “Looking forward, I remain passionate about passing legislation that will create good paying jobs in Nevada, improving our schools, increasing access to affordable healthcare, helping our veterans and fighting human trafficking. That’s why I am running for the U.S. Senate and I humbly ask for your support.”

Heck heads subcommittees of the House Armed Services and Intelligence committees and sits on the Education and Workforce Committee.

A physician and a brigadier general in the U.S. Army Reserve, Heck has been called to active military duty three times, including a 2008 deployment to Iraq, where he ran an emergency room in a combat hospital at the Al Asad Airbase west of Baghdad.

Heck told reporters Monday that to counter the threat from terrorist group ISIS, the U.S. needs special forces to provide command and control and help the Iraqi units and forward air controllers to pinpoint airstrikes. The U.S. help needs to be specialized, not a large combat force there, he said.

“You could almost rewind this to say well what would we have done to prevent ISIS from ever coming about, and that would have been not withdrawing from Iraq and creating the vacuum that allowed them to flourish — hindsight,” Heck said. “Going forward you need a definite strategy.”

He noted almost 70 percent of military aircraft now return from bombing raids still loaded with ordnance because they couldn’t get to the target.

On immigration, Heck said he supports a pathway to citizenship for DREAMers, a term for young immigrants with temporary legal status through the federal Deferred Action for Childhood Arrivals program. He said immigration reform issues, including border security, the guest worker program and others, need to be addressed and debated separately to make them transparent.

Heck said he supports increased access to medicinal marijuana but still has concerns about recreational marijuana use, particularly for public safety reasons.

A gun owner himself, Heck said he supports background checks for firearms but opposes the creation of a federal gun registry.

Heck said he has concerns with how the Bureau of Land Management has handled many issues, including its approach to managing sage grouse.

Heck stopped short of calling for a wholesale return of Nevada’s federal public lands to the state, saying the state would need to be willing to shoulder management costs.

“Certainly I do believe that the federal government owns too much of Nevada,” Heck said. “The question becomes whether or not Nevada is ready to take that land back because it comes with a cost.”

Heck represents the 3rd Congressional District consisting of Henderson, Boulder City and areas of Clark County south to Laughlin and west to California. The district is considered the state’s most competitive, with voter registration nearly equally divided between Democrats and Republicans.

Heck, who was born in New York and grew up in Pennsylvania, moved to Nevada in 1992. He earned his medical degree from the Philadelphia College of Osteopathic Medicine after graduating from Pennsylvania State University. He also received a master’s of strategic studies from the U.S. Army War College in 2006.

Heck has a relatively modest background compared to his peers. He ranked just 316th among the House’s 435 members with an estimated net worth of $305,005 in 2013, according to the Center for Responsive Politics.

Heck and his wife, Lisa, have three children.