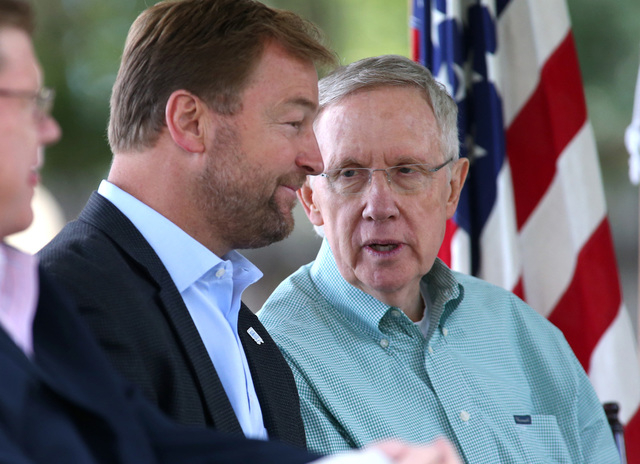 U.S. Sen. Dean Heller hit a nerve last week when the Senate voted on an Energy Department nominee with ties to Yucca Mountain.

Make that a couple of nerves.

The Senate voted Thursday to confirm Joseph Hezir to be the department’s chief financial officer. The vote was 89-3, with Heller one of the three.

The Nevada republican pointed out that Hezir was a consultant and former lobbyist whose firm, the EOP Group, did lobbying throughout the 2000s for the Nuclear Energy Institute. Hezir’s lobbyist filings show he worked on Yucca Mountain and other nuclear waste issues.

Hezir halted lobbying in 2011, records show. The Washington Times reported he signed an ethics agreement saying he would resign as EOP Group vice president and director upon confirmation.

Heller said the connection between the nominee and the controversial Nevada nuclear waste site was too close for his comfort. On the Energy Department website, the chief financial officer’s job description includes “strategic planning,” with budget administration, program analysis and evaluation, finance and accounting, internal controls and corporate financial systems.

“Today I am standing up for Nevada,” Heller said after the vote. “Our delegation has fought for years to defund studies and processes leading to the approval of Yucca Mountain. Now we have someone who specifically lobbied the administration and Congress in favor of Yucca Mountain, as recently as two years ago, to oversee finances and implement departmentwide programs.”

Heller was further irked that Hezir was confirmed without a hearing that would have allowed him to be questioned on his lobbying.

A standing order the Senate approved in June 2011 listed the chief financial officer post among 200 presidentially appointed positions not required to go through a committee confirmation. Heller voted against that order.

There may have been a day in which a nominee carrying even a whiff of Yucca Mountain wouldn’t have made it through confirmation with Nevadans on guard.

That day might have passed — at least for now. Far from pursuing Yucca Mountain, the Energy Department under President Barack Obama has declared the site “unworkable” and says it has no plans to revisit the project.

A spokeswoman said Thursday that the Energy Department’s opposition to Yucca was “unwavering.”

Sen. Harry Reid, D-Nev., voted to confirm Hezir, and a spokeswoman said afterward that concern over the nominee was unfounded.

“The biggest threat to a Yucca revival is the soon-to-be Republican majority in the Senate, not an individual who will have zero policy responsibilities,” the spokeswoman, Kristen Orthman, said. “We have assurances from the Secretary of Energy and the White House that the agency will not pursue Yucca Mountain … Senator Reid will continue to work with the delegation and state, as he has for decades, to keep Yucca locked up and closed, like it is now.”

Bob Halstead, director of the Nevada Agency for Nuclear Projects, said there is value in reminders that Nevada’s official stance opposes Yucca Mountain even as relations with the federal government appear smoother than in the past.

“I think it is important to remind everyone that Nevada will do what is necessary to protect the state’s interests,” Halstead said.