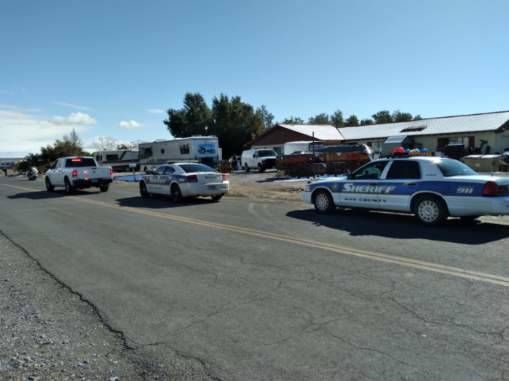 A high-speed pursuit led to the discovery of multiple alleged stolen vehicles at a residence along the 3500 block of Alfalfa just after 1:30 p.m., on Tuesday.

According to communications between Nye County dispatchers, a patrol deputy ran the license plate of a vehicle traveling southbound on Highway 160, which turned onto Dandelion Street.

Dispatchers informed the deputy that the vehicle was allegedly stolen out of Las Vegas.

When the patrol Deputy activated his emergency lights and siren, the driver of the vehicle failed to stop.

The driver, according to the deputy, blew through several stop signs during the pursuit, where speeds reached upwards of 100 miles per hour on the south end of town.

The driver also, according to the deputy, abandoned the vehicle behind a residence along the 3500 block of Alfalfa Street.

The driver of the late model white Nissan sedan, was identified as a bald white male adult who has yet to be located.

Look for additional information from the Nye County Sheriff’s Office in an upcoming edition of the Pahrump Valley Times.