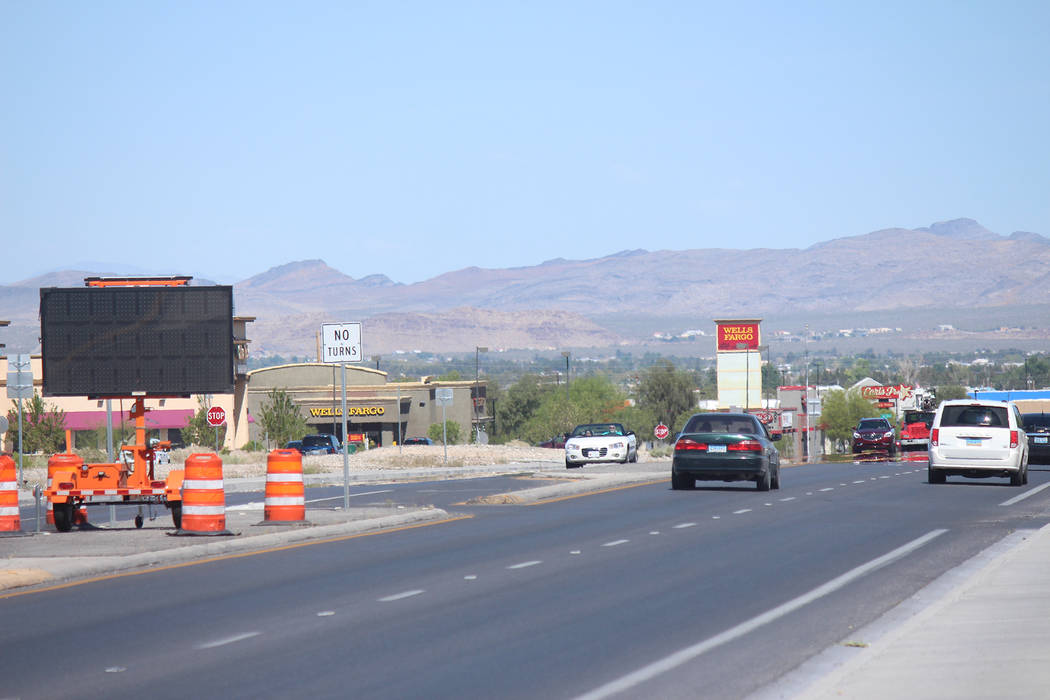 Jeffrey Meehan/Pahrump Valley Times The Nevada Department of Transportation has set up signage just north of Highway 372, along Highway 160, to alert motorists of upcoming construction. NDOT is installing an s-curve center median at Wilson Road/Oxbow Avenue and Highway 160. 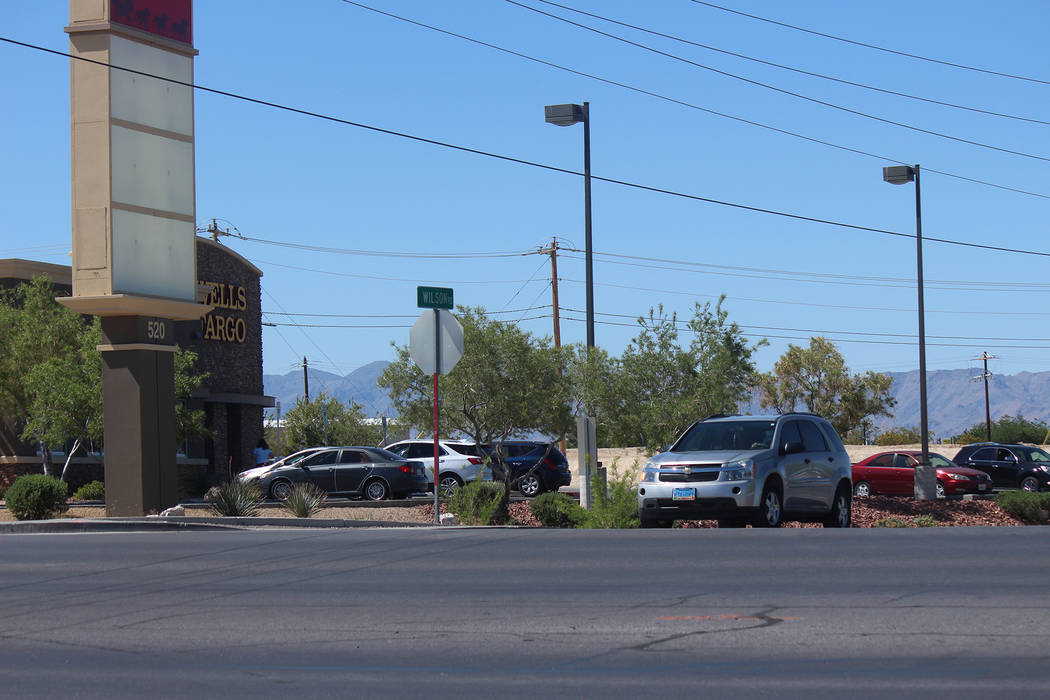 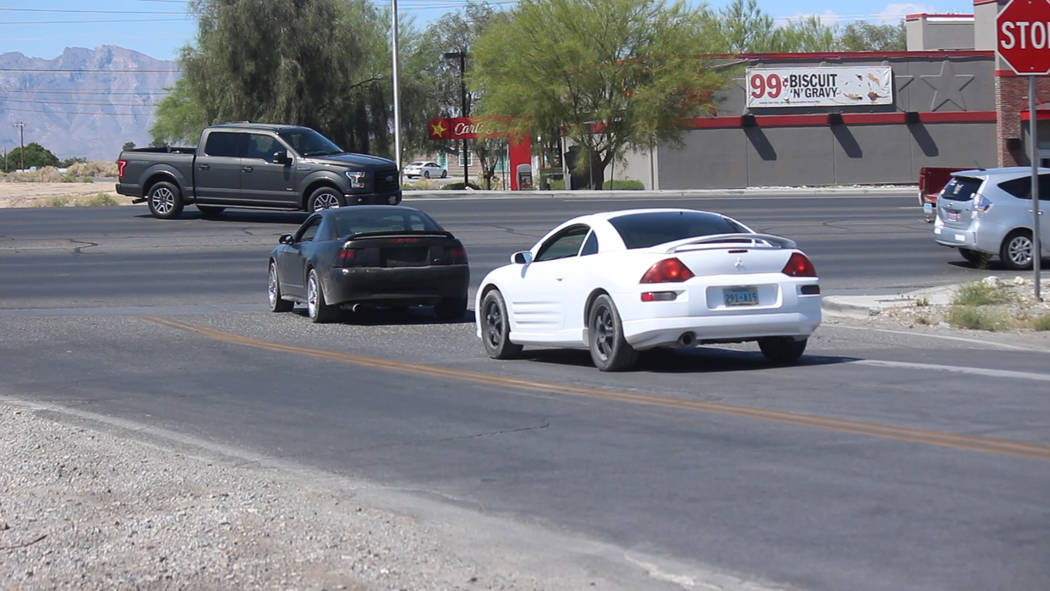 Jeffrey Meehan/Pahrump Valley Times Motorists looking to make left turns from Oxbow Avenue/Wilson Road will soon no longer be able to do so. The Nevada Department of Transportation reported an upcoming project to install an S-curve center median. 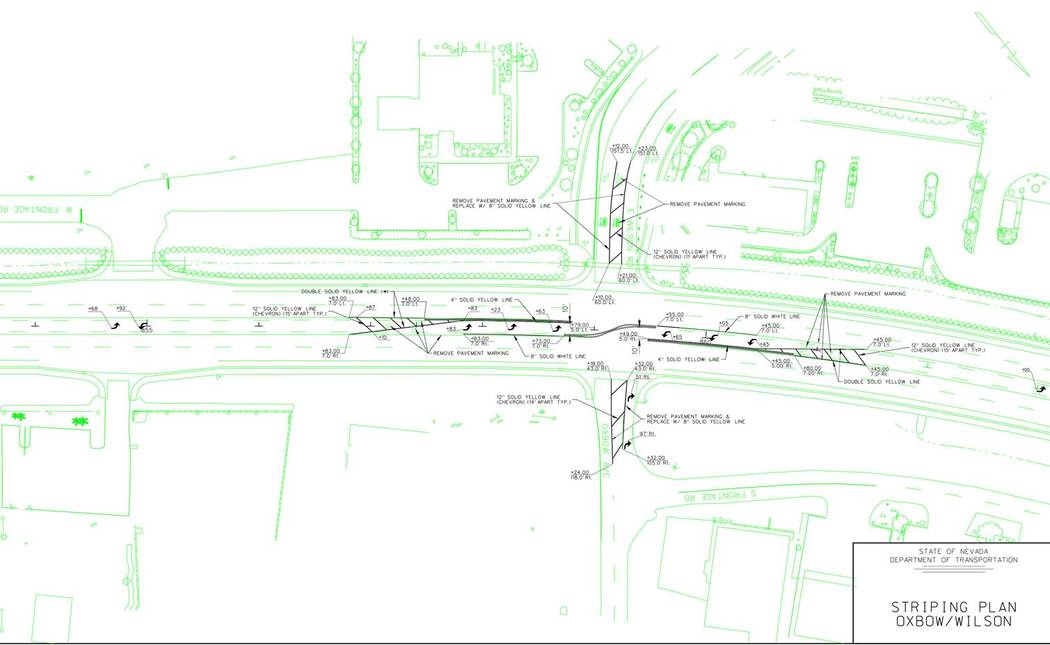 Nevada Department of Transportation A diagram of a project involving the instillation of an S-curve center median that will restrict turning capabilities for motorists at Highway 160 and Oxbow Avenue/Wilson Road. The project is set to get underway on May 13.

Road work is scheduled to begin along Nevada Highway 160 at Oxbow Avenue/Wilson Road on Monday.

Signage was already visible just days before a project that will bring an S-curve center median to the intersection near Carl’s Jr. and the Pahrump branch of Wells Fargo Bank along Highway 160.

The project “prevents U-turns,” according to Tony Illia, spokesman for the Nevada Department of Transportation. “It prevents dangerous left turns across traffic due to repeated crashes. However, it still allows right turns.”

Construction crews will be “installing a 6-inch raised cast-in-place painted concrete S-curve center median…,” according to Illia. The project is set to begin on Monday.

The more than $93,000 project is scheduled to begin on Monday. Road construction at the intersection is expected to come to completion within 10 working days, according to NDOT.

“The new median curb will be 8-inches wide and rebar steel reinforced,” Illia said in an email. “The job additionally calls for miscellaneous lane striping and new directional traffic signage, including two ‘Do Not Enter’” signs and other signage.

The general contractor on the project is Las Vegas-based Rowley Contracting Inc.

The S-curve project is one shift occurring on Highway 160 in May. The rebuilding and paving project on the eastbound lanes of Highway 160, occurring just east of the Nye County line, heading toward Las Vegas, is set to move into its second phase, which was planned to occur around May 10, according to previous reports from NDOT.

The stoplight currently at Tecopa Road and Highway 160 will also be removed as part of the new phase, according to NDOT.

The rebuilding and repaving project’s first phase got underway in mid-January and is part of a nearly $59 million construction project that will widen Highway 160 from two to four lanes in the mountain pass, from the western edge of Mountain Springs to just east of the hill, starting at roughly mile marker 16.

Aggregate Industries SWR is heading the project that is set to come to completion in July 2020. Work got underway in September 2018 in the Mountain Springs area, where intermittent blasting has been ongoing.

According to Illia, construction crews are taking a two-week hiatus from blasting.

“However, blasting will resume/continue through year’s end,” he said.

On blasting days, motorists traveling on Highway 160 to and from Las Vegas can experience delays up to two hours. Typical blasting times have been at 11:45 a.m. or 12:45 p.m.