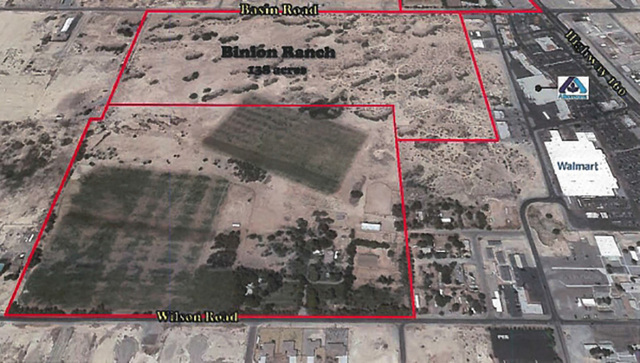 An outline of the 138-acre Binion Ranch, which was sold to a Las Vegas family for $1 million on Nov. 9. Ralph L. and Betty L. McKnight acquired the property between Wilson Road and Basin Avenue through the family trust. Special to the Pahrump Valley Times

After several years on the market, the infamous Binion Ranch has been sold.

Ralph L. and Betty L. McKnight through a family are listed as the buyer of the 138-acre parcel, which sold for $1 million on Nov. 9. The purchase price is below the appraised price of $2.4 million.

The McKnights, who own several parcels in town, have had their eye on the property, which was originally constructed in 1959, for some time now.

“Oh yeah, I’ve been looking at it for awhile,” Ralph McKnight said. “I own a lot of property up there.”

McKnight said he has some plans for the property but nothing is set in stone as of yet.

“Right now there’s enough with that plant up there that I want to be sure that every ‘i’ is dotted and ‘t’ is crossed,” he said.

Also, McKnight explained that he wants to run the plans across Jack Binion, the son of Benny Binion, the casino founder of the Binion’s Horseshoe in Las Vegas; and the brother of Ted Binion. Ted Binion was killed and had a $300,000 antique coin and currency collection stolen from a vault in Pahrump.

“I know Jack (Binion) pretty well and I want him as comfortable as he can be (with the plans),” McKnight said. “So these are the people I’ve known for some time, we’re not buddies and anything like that.”

Aside from working with the Binion family, McKnight is in talks with county officials and others about the future of the ranch.

“We have some plans for it,” McKnight said. “There are still some things I want to go over with the city on and see what they’ve got in mind.”

McKnight said that he has several parties who are interested in doing something with the property and he’s working with them now to figure out what’s going to be done.

“I’ve got 10 guys who want it and who want to put things on it,” McKnight said. “It’s going to be something up there, I don’t know what.”

McKnight said that the value they got in the property is nothing compared to what it could be worth after the proposed plans for the parcel go through.

“Well, I don’t want to say, but the stuff that’s going on it is going to make it worth a lot of money,” he said.

Local real estate agent Norma Jean Opatik, who had the property listed for about the last two years for the Binions, said she had several close sales on the property before, but those fell through each time.

“I had several escrows open on it, but people just did not come through with their financing,” Opatik said.

“I had to do what the seller wanted done,” she said. “They accepted it, so we had to accept it. It was certainly sold under market, but that’s what the sellers wanted to do.”

With the parcel being sold to the McKnights, and not knowing the exact plans for the ranch, Opatik said she was glad to be included in the selling of the historic property, but wished it could have been purchased by the town of Pahrump.

Nye County officials voted down the idea of purchasing the property for $1.75 million during a July 2015 board meeting.