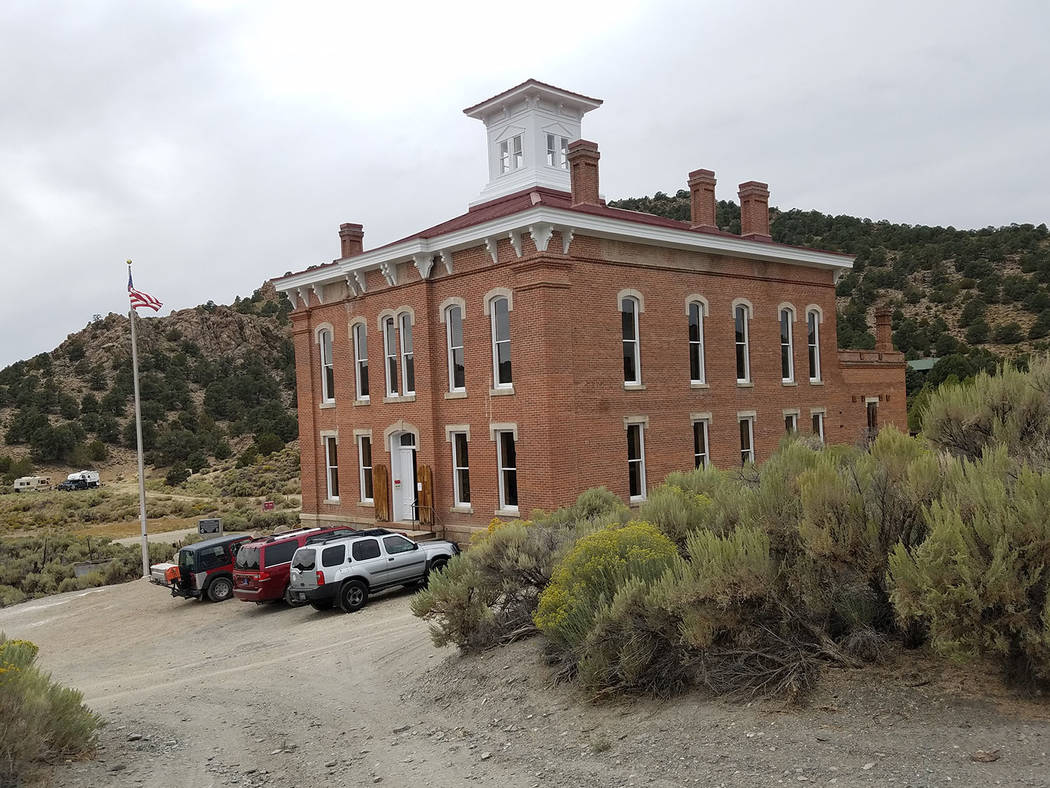 David Jacobs/Pahrump Valley Times A look at the historic Belmont Courthouse in Nye County as shown in a file photo. 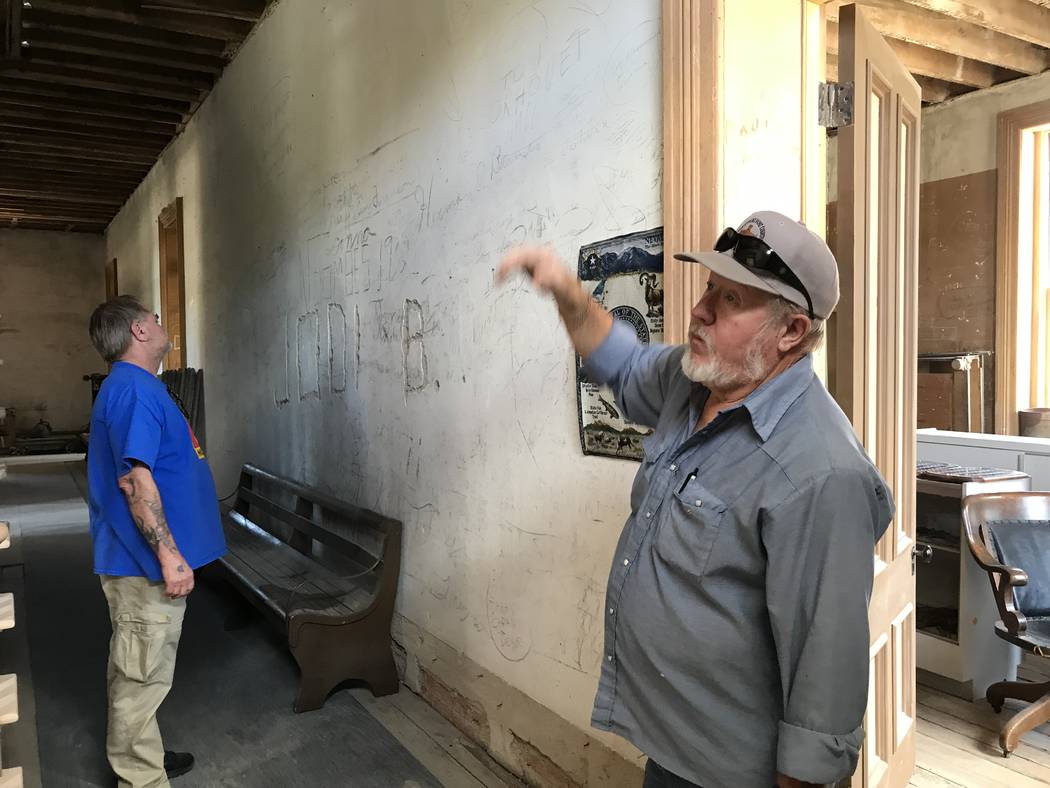 Vern Hee / Special to the Pahrump Valley Times Rick Motis, of the Friends of the Belmont Courthouse, said the nonprofit has bought 30 new windows for the entire building, a new roof, new paint and new interior doors. Some of the doors also needed steel headers because there was some settling going on and cracking.” 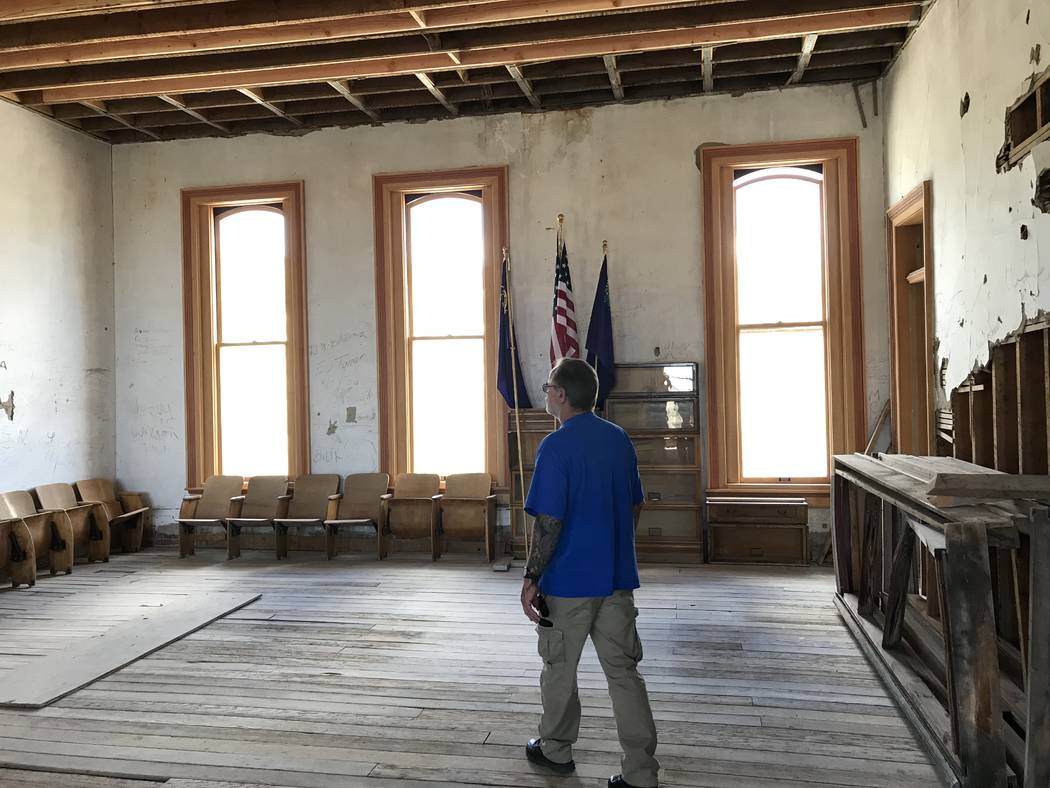 Vern Hee / Special to the Pahrump Valley Times Rick Motis, of the Friends of the Belmont Courthouse, stands in front of some of the new windows of the courthouse. Intricate work was also done on the ceiling. 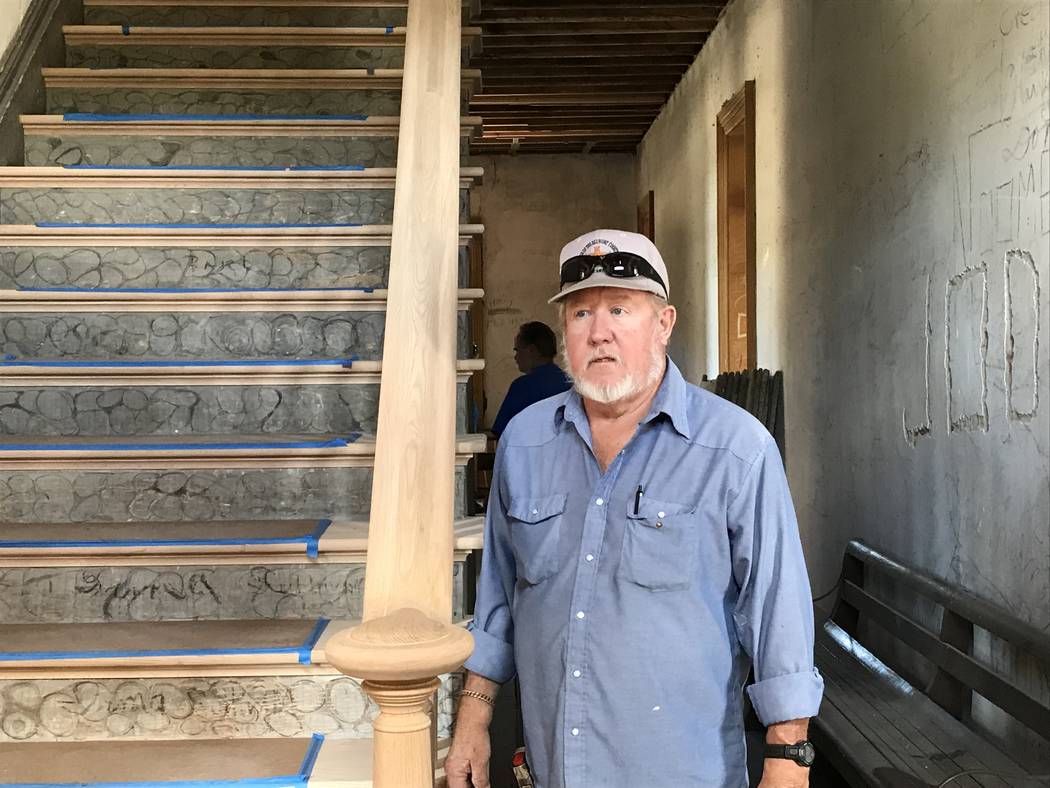 Vern Hee / Special to the Pahrump Valley Times Rick Motis, of the Friends of the Belmont Courthouse, stands next to the new stairs. The project included the sistering of the beams ( beefing them up with additional materials). 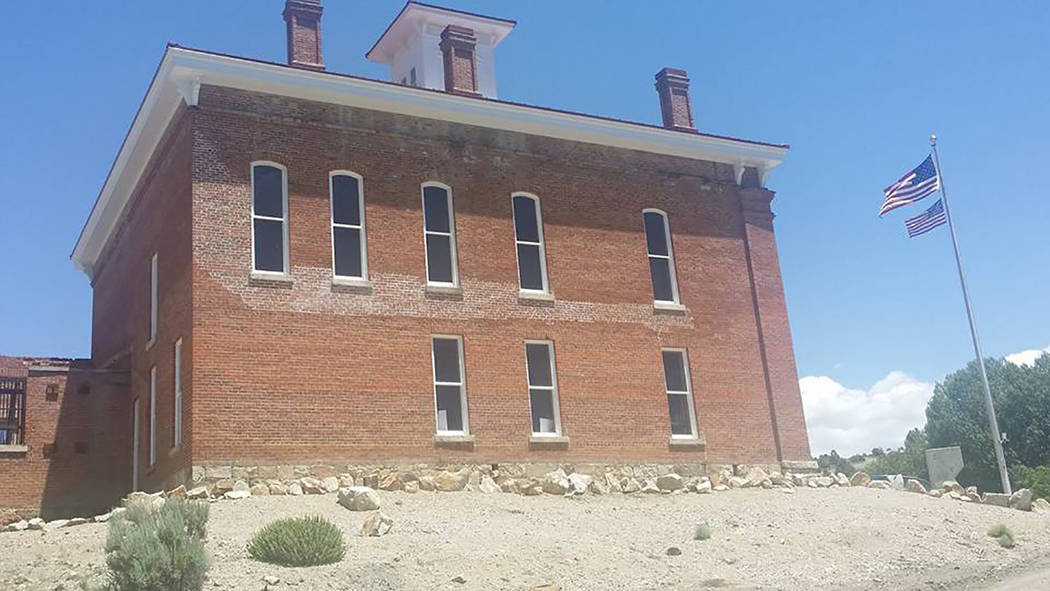 David Jacobs/Times-Bonanza & Goldfield News A side view of the historic Belmont Courthouse is shown in this 2016 photo. The building opened on July 4, 1876.

Renovations were completed at the Belmont Courthouse over the summer. The project was finished in late July after about two months of construction and a cost of $52,000.

Rick Motis, of Friends of the Belmont Courthouse, had high praise for the work done by Ben Dotson Construction, out of Fallon, Nevada. He said the work had to be done to keep the 143-year-old courthouse from falling apart.

“Back in the day, everything was done by square nails and over the years the lumber has shrunk and the square nails are now loose,” Motis said. “Before we could do any sheetrock on the ceiling, the framing had to be secure. The project included truss work, new stairs, and the sistering of the beams ( beefing them up with additional materials). Some of the doors also needed steel headers because there was some settling going on and cracking.”

Motis added that it took skilled craftsmen to replicate the carpentry from 1876 and he said the Ben Dotson Company did a great job.

Ben Dotson said his small company out of Fallon was up for the job and that he felt his company was the perfect size for the job. “On a job like this, you need to watch the work being done,” he said.

Dotson said he had worked on an old Victorian-era home before coming to do the Belmont Courthouse, which gave him the experience to work on the courthouse. Nevertheless, the project did come with some challenges.

“Working on this project was very time-consuming and required a lot of attention to detail,” Dotson said. “Our biggest challenge of the job was sistering the old joists. The old joists, some 12 feet in length, were heavy and had to be raised some 14 feet in the air and we did it manually. We were limited to the weight that the old flooring could handle.”

He added that the Belmont was the oldest project he has ever worked on, where he had to replicate a time period.

Motis said that the Friends of the Belmont Courthouse still have a long way to go before the courthouse looks like it did back in 1876. He said the group has been working to raise money for the last seven years. In that time, the nonprofit has bought 30 new windows for the entire building, a new roof, new paint and new interior doors.

Donna Motis, president of Friends of the Belmont Courthouse, said the group hopes to raise money to do the sheetrock on the ceilings next and maybe the floors after that.

“Of course the work done has to be approved by our board, which has seven members,” Donna Motis said. She added that one of the challenges the group faces is fundraising. “People have been very generous to our organization and we have been lucky to raise enough without having to go to the state and federal government for help,” she said. “The state and the federal government have so many stipulations with their money.”

Rick and Donna Motis thanked the Nye County commissioners for their support over the years and everyone else who had donated to this project and others. The courthouse is always accepting donations and can be contacted at http://belmontcourthouse.net