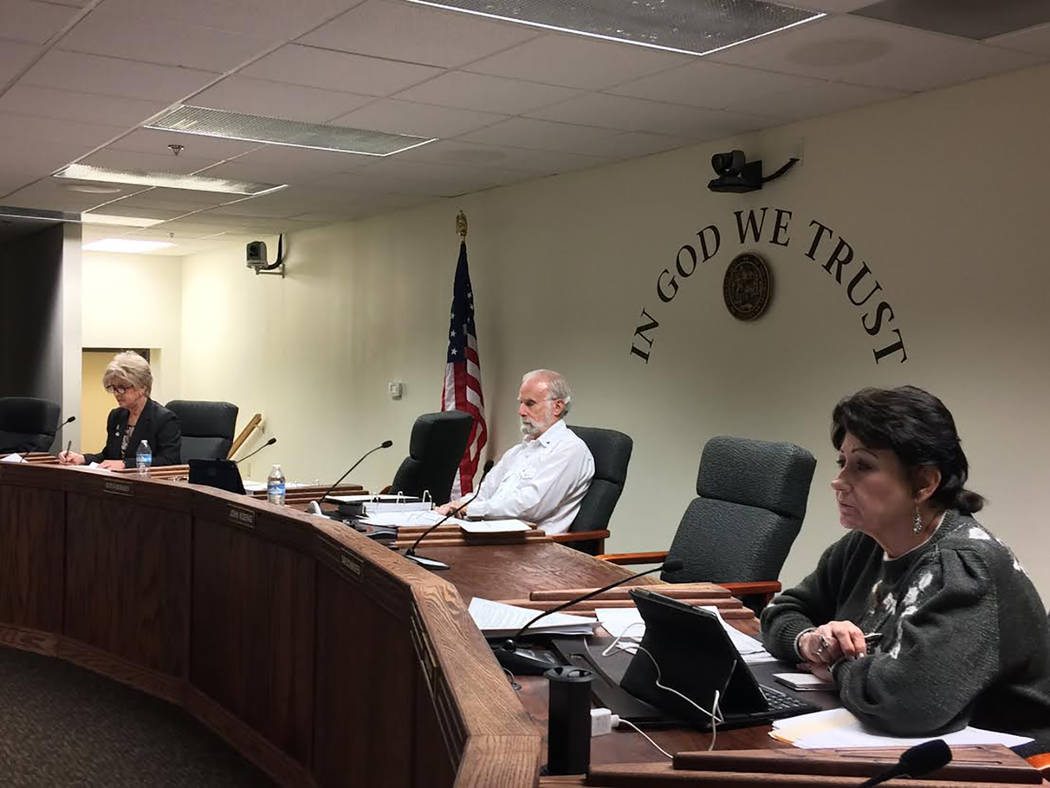 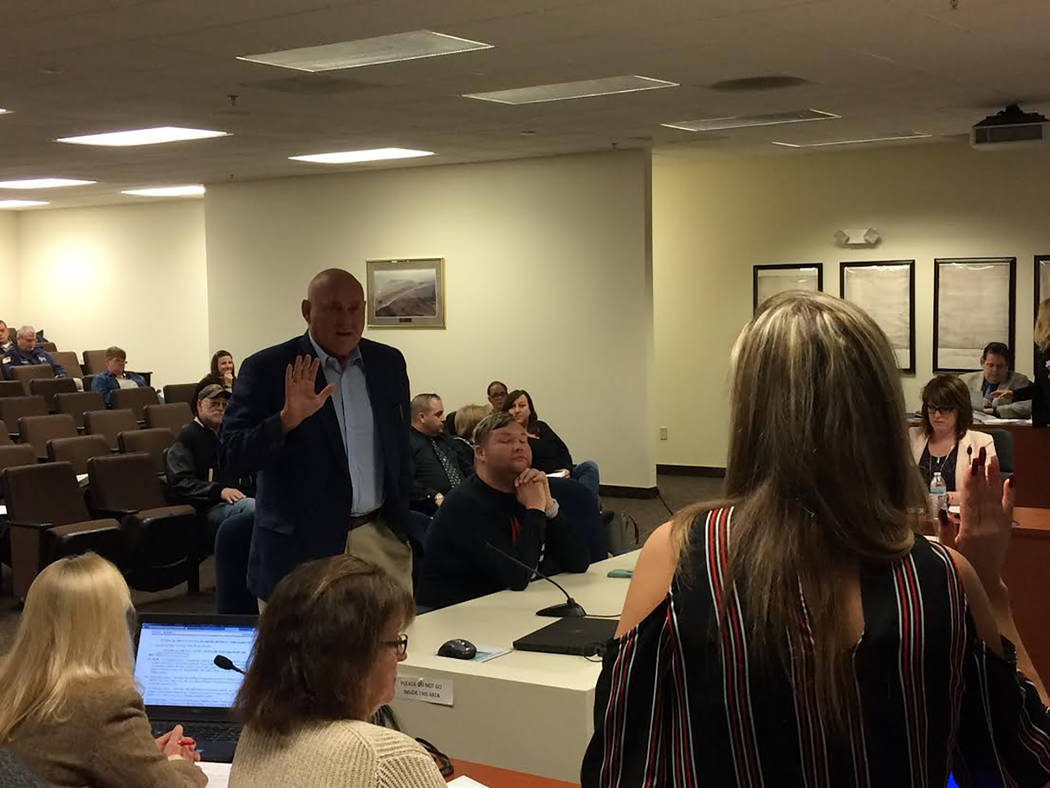 Robin Hebrock/Pahrump Valley Times Dennis Hof is shown being sworn in by Nye County staff. Those testifying in Hof's disciplinary hearing were required to take an oath to tell the truth, the whole truth and nothing but the truth, under penalty of perjury. 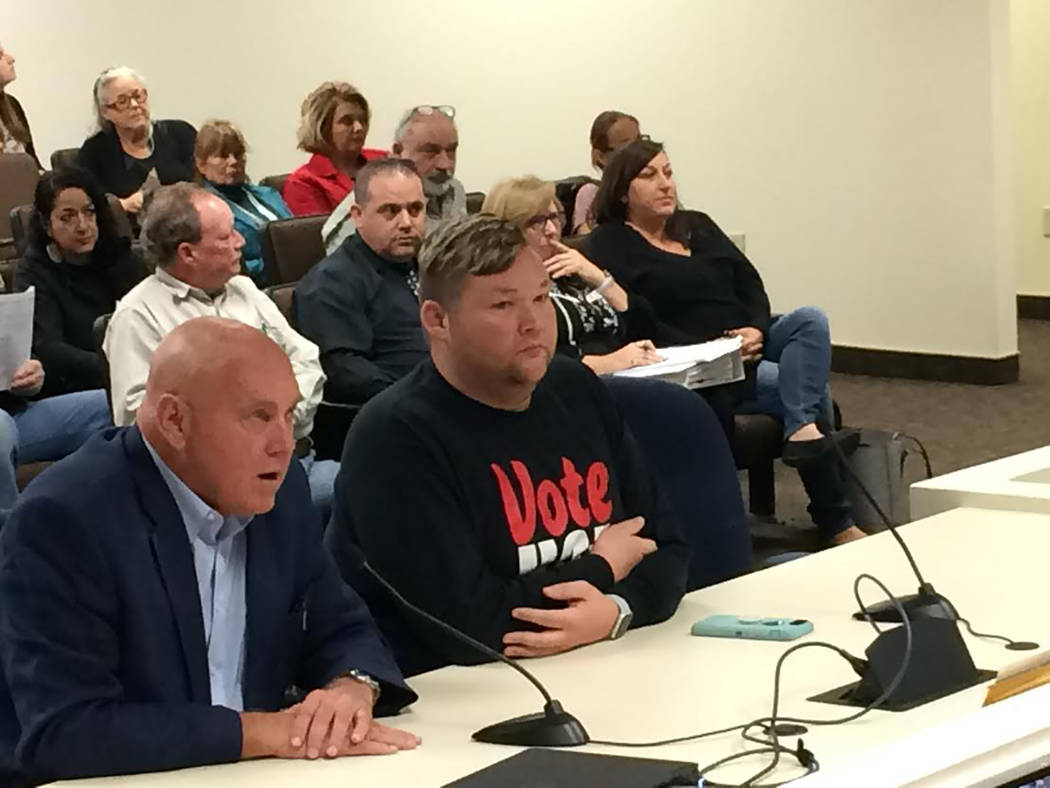 The Nye County Commission held a disciplinary hearing on Feb. 20 regarding a variety of reported violations at brothel owner Dennis Hof’s Love Ranch in Crystal.

While a majority of the infractions cited by the county had been or were in the process of being cleared up and no sanctions were declared for those, there is apparently still an outstanding issue following the hearing. Despite this, Hof’s Love Ranch remains open as the county reviews the situation.

According to information provided at the hearing, Hof’s brothel, which is made up of half stick-built and half modular home buildings, did not have evidence of manufactured housing inspection stickers in place. This was the major sticking point for the commission.

Nye County Commissioner Lorinda Wichman, as the chairwoman of the Nye County Liquor and Licensing Board, said she could not allow Hof’s operation to remain open because of the safety risks created by the lack of stickers. “Without that sticker, you do not have buildings that are safe for the public,” Wichman asserted.

It was reiterated multiple times by both Wichman and Nye County Commissioner John Koenig that because the commission had been informed of the lack of stickers, the commissioners would be liable for any incident that might happen at the Love Ranch.

However, Hof and his representatives argued that the building did not require those stickers and had in fact been given a Certificate of Compliance from the Nevada State Fire Marshal, eliminating any perception of safety risk.

Hof’s chief executive assistant, Zack Hames, insisted that a Certificate of Compliance had been sent to the county seven years ago and that he had a copy of that document as well, although not in hand that morning.

“I will go right after this meeting to his (Nye County Planning Director Darrell Lacy) office and I will give him everything that I have. That is why I am asking for a provisional renewal,” Hames stated.

Wichman then turned to Lacy for his knowledge of the situation. “I’m not sure what happened in 2010 because I was not involved in planning then,” Lacy explained. “The first involvement I had was in August (2017). The trailers, some of which are decades old, none of which appear to have stickers… They were moved and installed here and I don’t believe they have been permitted by anyone, is my opinion.”

When pressed on a timeline for review of the documents by the planning department, should Hof be able to provide them, Lacy replied, “If everything is compliant it shouldn’t take that long. As I said, in 24 hours I should be able to review it.” He did not seem very confident in a positive outcome, however, adding, “I have a difficult time seeing that this is going to have everything compliant, is part of my concern.”

Wichman noted during the hearing that she would like to make a motion to revoke Hof’s Love Ranch license and have him come back in six months to reapply but she refrained, as she was in the position of chairwoman. Koenig also initially attempted to make a motion to suspend the license until Hof was in complete compliance. However, after nearly an hour and a half of debate, the commission ultimately voted to allow Hof a small measure of leeway.

Koenig made the motion to give Hof until 3 p.m. the following day to bring the Certificate of Compliance to planning with the stipulation that if the documents were not in order, Hof’s license would immediately be suspended until such time as proof of compliance could be provided.

The motion passed 3-0 with Wichman, Koenig and commissioner Donna Cox all in favor.

The remaining three members of the Nye County Liquor and Licensing Board, Nye County commissioners Dan Schinhofen and Butch Borasky, as well as Nye County Sheriff Sharon Wehrly, recused themselves from the vote due to lawsuits Hof currently has filed against each of them.

The three stated that although they believed they would be able to make a decision on the hearing without bias, the perception of a conflict of interest was enough to make them decide to not participate in the proceedings.

Hof and Hames did, in fact, provide the planning department with the documents in question that afternoon but it is unclear as to whether the county will accept them.

“The county is reviewing the submitted documents to see if they satisfy the requirements set forth at the meeting,” Nye County Public Information Officer Arnold Knightly stated when contacted for an update. “The business remains open at this time.”

As for the remaining violations addressed at the hearing, the commission opted to give Hof 90 days to continue addressing a problem with the “road” separating the two parcels the brothel is on. The “road” is non-existent but the county still maintains the right to accept dedication of the roadway in the future. To fix this, Hof is now working to have a merger of the two parcels approved through planning.

The county had also alleged that there were signs at the corner of Appaloosa Lane and Ranch Road in Crystal which were placed on U.S. Bureau of Land Management land without permission, constituting a trespass. The signs, which are not to be confused with the “Lovers at Play” sign that Hof is currently suing Nye County over, advertise “Girls! Girls!” and the Cherry Patch Bar.

During the hearing, Hof explained that the signs in question were indeed located on BLM land but that he had secured a permit to have them placed there. Therefore, the issue with the signs was deemed to be remedied.