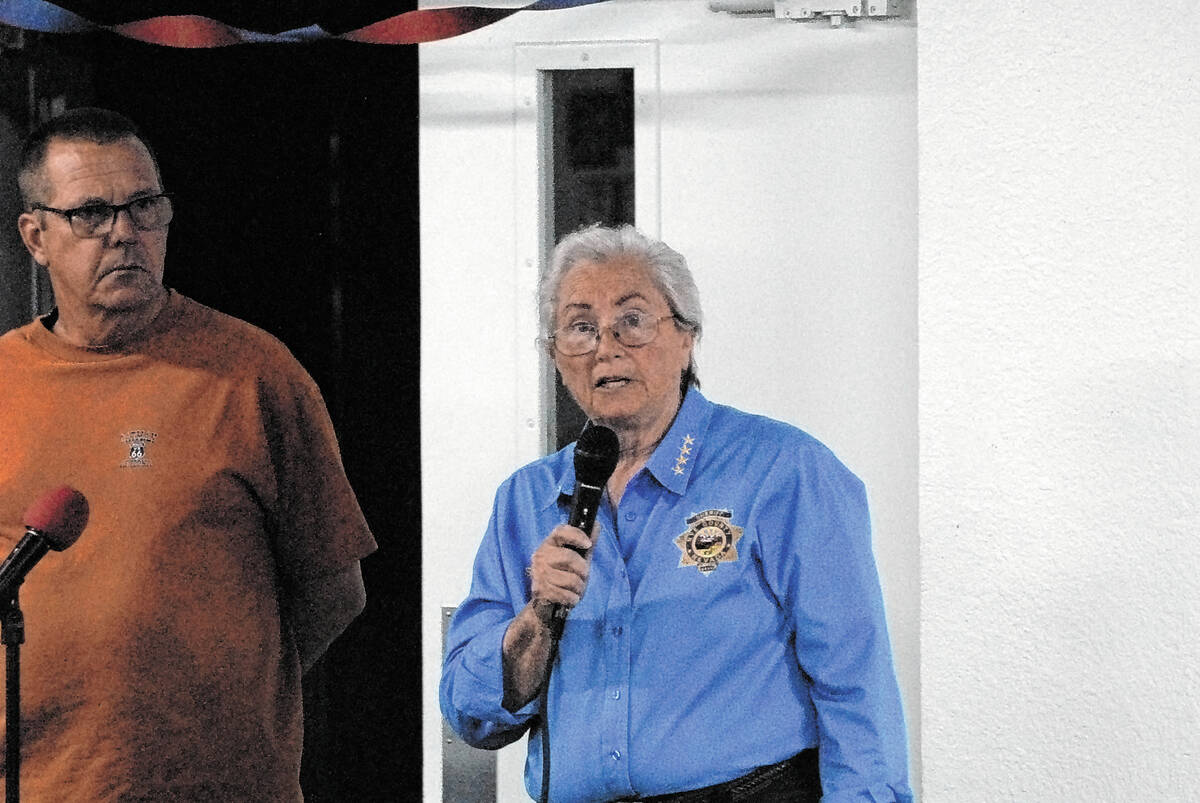 Horace Langford Jr./Pahrump Valley Times Incumbent Sheriff Sharon Wehrly goads challenger Joe Mcgill into an impromptu debate on Sept. 26, 2022 at a meet and greet for her at the Pahrump Senior Center.

McGill, who is running to unseat Wehrly in next month’s general election claims she is trying to avoid debating him just weeks before early voting in what has become the most hotly contested race in Nye County.

McGill said that he invited Wehrly to a debate for Oct. 15, at the senior center, but Wehrly, without his knowledge, changed the the date to Sept. 26 without agreeing to the rules and terms of the exchange.

However, the sheriff flatly denies that and told the Pahrump Valley Times that there were scheduling conflicts regarding an exact date for a debate with her opponent.

“On Sept. 20, Joe McGill sent me a challenge to hold a debate on Oct. 15, and he advertised it on his Facebook page without my knowledge,” Wehrly said. “Mr. McGill did not contact me first to invite me to debate, or see if that date would work for me but it didn’t. I had booked that date and Oct. 14, several months ago. That irritated me, so on Sept. 21, I assessed my options and decided to debate him on a date I could make. I kept the same location and time, but changed the date to Sept. 26, and I advertised that change on Facebook and developed a flyer to advertise the event. In essence, I did the same thing to him that he tried to do to me.”

As a result, McGill decided to attend Wehrly’s meet and greet as a spectator in the back of the room, when Wehrly noticed his presence and invited him to an “impromptu” debate.

“I thought about asking him to leave, then I decided that it would be better to include him since I was asked by multiple attendees why he was there and why we could not debate since he was present,” she said. “I saw no good reason why not — and after I spoke with my moderator, I invited him up to join me.”

Additionally, Wehrly addressed McGill’s assertion that he was ambushed during the meet-and-greet event late last month.

“I understand that he said he was ‘ambushed,’ but that was no ambush,” she said. “He wanted to debate and he got one. He pushed and bullied his way into my meet and greet and got his own way. I really didn’t mind and had previously told several people I would not be surprised if he attended. I was expecting him. I was informed he is a bully, and is known to attempt to intimidate people to get his own way.”

Wehrly is scheduled to host another public meet and greet from 5-8 p.m. at the Pahrump Nugget on Monday, Oct. 10. All are invited.