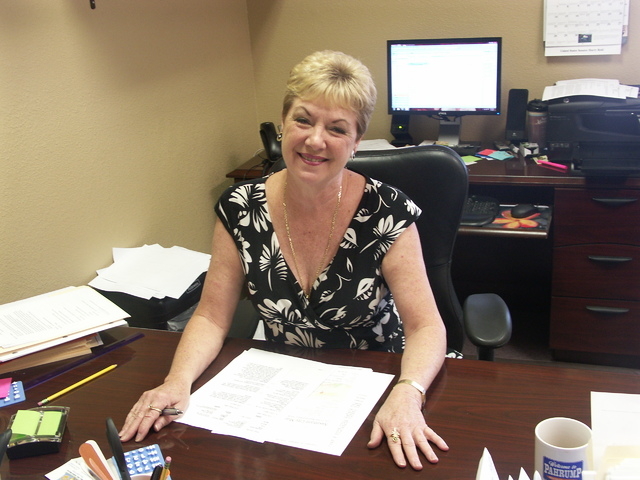 With roughly three months left until Nye County commissioners assume the fiduciary duties of the Town of Pahrump, Town Manager Susan Holecheck said this week that she hopes for a smooth transition come Jan. 5.

Though Holecheck noted that she’s still not certain of her future career plans, the day-to-day business must continue without interruption.

This month, Holecheck remains busy working on several different projects as directed by the town board, including this month’s Pahrump Fall Festival, the Last Chance Park proposal as well as Kellogg Park.

Additionally, the town manager said the Pahrump General Aviation Airport is still on her radar.

On Monday, Holecheck spoke about how next year’s action is presently affecting the morale of town employees.

She also talked about her personal ongoing battle with breast cancer and an unexpected, prestigious honor coming her way in a few weeks, courtesy of the Nevada Women’s Legacy organization.

Q: As the end of the Pahrump Town Board form of government approaches, what’s the mood of town employees who still are uncertain about their futures?

A: “It’s hard, but I think for the most part, they still enjoy working with one another. There are some employees who are still unsure about if they will have a job next year, but we are still able to laugh. We have the fall festival coming up and that’s keeping our minds off the situation.”

Q: Have county officials given you any indication about how they will proceed and have they given you any feedback about the fate of your position as town manager?

A: “Nobody here knows anything. I haven’t gotten any information and we are three months away. I’ve made several attempts to contact the county manager about some of the projects the town is working on and I haven’t received a response to date. I don’t know whether she is out of town or just not getting them. On a positive note, Darrell Lacy has been very forthcoming. He’s come in and asked me about a couple of things we’re working on. The Pahrump General Aviation Airport is one of my big concerns because there’s still clearly a lot of work to be done to get it going and we just want to include the county as much as possible.”

Q: As for you, have you developed a “Plan B” for what you will do if your position is eliminated by the county?

A: “I picked up roots from Mesquite and changed my entire life to live in Pahrump and do what I hoped would be a good job. You have to understand that there’s no other town manager position here. I bought a house here and I wanted to create a future. I bought a house here and now I have to find another job, but the reality is town and county manager positions are difficult to land. You don’t find them often and that is why a lot of times, contracts will provide a little breathing room for them. I still have bills to pay on January 6.”

Q: Not long after you were hired as town manager, you were diagnosed with breast cancer. How’s your recovery going?

A: “I got to Pahrump last July and was diagnosed several weeks later with breast cancer. I can happily say, despite getting radiation treatment and having surgery and everything else, I missed only three days of work. I have not taken off sick days and I haven’t taken a vacation. My most recent mammogram came back negative, so, so far so good. I have to say that I’m pretty proud of the fact that having to undergo radiation treatments twice a day.”

Q: With everything that’s going on with you personally, while still trying to run the town each day, how do you cope with all the stress?

A: “It’s hard. I’m able to cope because I believe in God. I want to be clear that I’m not looking for any sympathy, but for me, my religion is what pulls me through. It’s hard when you want so much to do a good job and there is still that contingent of people that are so quick to condemn or misunderstand your motives. Without my religion, it would be that much more stressful. I was on a brand new job, in a brand new city and didn’t have any friends. I’m battling breast cancer. It was amazing and my belief in God is what continually gets me through.”

Q: What kind of projects were you able to see come to fruition while you were Mayor of Mesquite – a city much smaller than Pahrump, population wise?

A: “We did a lot of good things in Mesquite in the four years that I was mayor. We got a brand new police department and new fire station with a burn training facility. We also expanded our sewer treatment plant as well as the senior center. We built a sporting event complex with ball fields. We were able to do that all without raising taxes.”

Q: Later this month, you will join a very elite group of Nevada women who have been honored for their respective accomplishments throughout the state as part of the Nevada Women’s History Project (NWHP). Care to talk about that?

A: “It’s a program that recognizes the roles and lives of Nevada women and this year, it’s during Nevada’s 150th anniversary of statehood. From what I understand, it basically recognizes women who have made contributions in some form. They came to my office and did some filming just recently. Just to think that I somehow made a difference is so exciting. I will go in the Nevada Women’s Virtual Center website and in the Nevada Women’s Legacy book with my picture and biography along with all the other women. It’s a great honor that I was one of the selectees.”