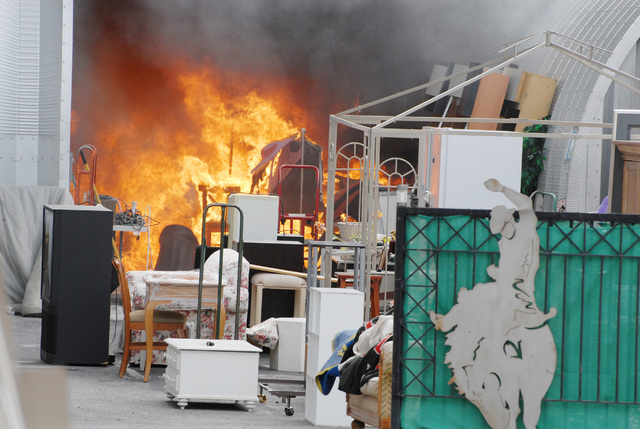 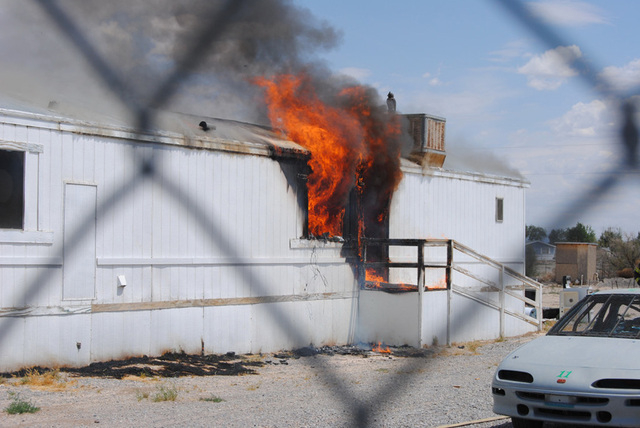 Pahrump Valley Fire Rescue Services were kept busy this holiday weekend as it responded to three structure fires, a one-vehicle accident and more than 70 EMS calls across the valley.

It was one of the busiest weekends Fire Chief Scott Lewis said the department has seen in a long time.

The calls began early Friday morning with a report of a vehicle fire near the intersection of Mickey and Money streets.

Later that afternoon at approximately 4:30 p.m. firefighters were dispatched for another report of a fire, this time at Building 160 Supply Company, located on North Paddock Avenue.

When crews arrived, Lewis said they found heavy fire conditions showing from the interior of a 124-foot by 40-foot building on the property, which had extended to a section of a mattress housed next to the structure.

Because there were no hydrants in the area and the building reportedly did not have a fire-suppression system in place, PVFRS brought multiple water-tenders to the scene to supply crews with the water they needed to extinguish the flames.

On top of an already large fire, Lewis said high winds and heat made battling the blaze even more difficult.

“One of the biggest challenges were the winds. They were shifting and coming toward us. They went east and then south and then north, so we had to really play it safe where we were placing our firefighters. It could have easily changed on us, so we were very cautious,” he explained.

After a little more than two hours, crews were able to bring the fire under control.

Despite the volume of the fire and the intensity of the blaze, firefighters were reportedly able to save several other nearby structures from the fire, including the owner’s home, and other items, including furniture and appliances.

“If there had been an extended response time getting to the stations, I can’t tell you what would have happened here. It was a fast response, a well-coordinated attack and the fact our equipment is the way it is, the way we designed it, had it not been that way I couldn’t tell what the outcome would have been,” Lewis said. “The crews did a great job and there were no injuries. And we were still fielding other calls for service during the fire without interruption to service.”

The following day, firefighters were called out for yet another report of a structure fire, this time at a manufactured home in the 4900 block of Paiute Boulevard.

Again when crews arrived, they reportedly discovered heavy fire conditions showing from inside the single-wide.

As firefighters were working the scene, one of the crew members was said to have fallen through the floor of the home, which had been severely damaged by the flames. Lewis said the firefighter was uninjured by the fall.

Although the family was able to get out safely before crews arrived, they were reportedly unable to rescue their pet cat, who was lost in the fire.

Further investigation of the incident revealed that the fire appeared to have been started by a malfunctioning dryer.

Just after PVFRS cleared the home on Paiute Boulevard, crews were dispatched again, this time for a report of a single-vehicle accident on Highway 372.

An older man reportedly struck an electric pole with his grey minivan that afternoon, knocking down several power lines in the area.

PVFRS personnel evaluated the man at the scene and called for Mercy Air to transport him to University Medical Center in Las Vegas for treatment.

Two days later on Monday, PVFRS were called to respond to a third report of a structure fire at a home on Simkins Road.

When crews arrived, they reportedly found the side of the house on fire.

Lewis said the homeowner explained the fire started when he went to turn on the propane for his grill. The next thing he knew a large flame came shooting out of the grill, catching the side of his house on fire and damaging one of his windows.

Firefighters were able to quickly put the fire out and there were no injuries to report from the incident.