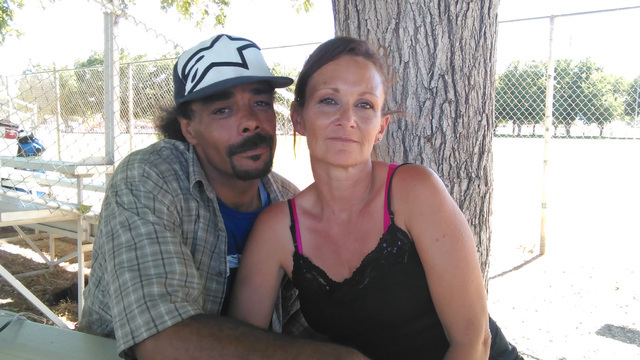 Benjamin Holly and his wife Sheila Theiss take advantage of a shade tree at Petrack Park late last month. The homeless couple, along with two small dogs, moved out of the homeless camp in the desert to Petrack Park after their makeshift trailer was ransacked and burglarized. Both are hopeful their situation will eventually change. Selwyn Harris/Pahrump Valley Times

Homeless couple Ben Holly and Sheila Thiess have lived in the Pahrump Valley for close to two years.

They got married roughly five years ago, moving to Las Vegas from central California, due mainly to the high cost of living in that state.

Though they have no children between them, both take pride in their two small dogs as they go about their daily routine.

While sitting underneath a shade tree at Petrack Park recently, the couple spoke about their routine, which involves finding employment and a permanent residence, as they are part of the homeless population in Pahrump.

Although Holly and Theiss say they are not drinkers or drug abusers, they lament the fact that they have yet to turn around the situation they find themselves in.

Holly, a chef by trade, said he went to school in California to learn the skill. He also said he’s adept at carpentry, painting and landscaping.

Theiss has formerly worked at various animal hospitals as well as an office clerk at an alarm company in previous years.

As residents of Petrack Park, Holly spoke about how they ended up there after moving from the homeless camp in the desert along Crawford Street.

Both became homeless for more than a month after Holly said he was laid off.

“It was horrible,” Holly said. “We basically made do with it for as long as we could. We stayed to ourselves as much as possible because a lot of the people up there are drunks and drug abusers. There’s just too much drama going on up there.”

Part of that drama involved a neighbor who agreed to feed their dogs while both sought employment one morning.

Instead of feeding the animals, Theiss said, the man ransacked and burglarized their trailer.

“It was totally unfixable,” Thiess said. “Pretty much all of our stuff was in there. Instead of feeding our dogs, he went in and helped himself to whatever he wanted in there.”

After learning about the incident, Holly said he contacted the sheriff’s office.

“I tried to do the right thing by calling the police to let them know,” he said. “They came out, made a report, and found some of our belongings and that was the end of it.”

As a result, Holly and Theiss decided to relocate to Petrack Park.

“We did not want to go back up there so we came to Petrack Park,” Holly said. “We also stayed at the Ian Deutch Park, but we left because the stores are much closer over here. Petrack Park is a little more peaceful with less drama and chaos.”

Ironically, moments later, a loud verbal dispute among a group of individuals broke out about 50 yards from where the couple were sitting.

No arrests were made though.

Although both have family around the country, Theiss said she doesn’t usually communicate with them due to her husband’s race.

“We haven’t spoken in a long time, because Ben is African American,” she said. “I just don’t agree with their philosophy when it comes to that.”

As a result of their situation, the couple said they try to stay out of the public eye.

“People look at homeless people like we’re disposable and we are nothing,” Theiss said. “They won’t make eye contact or even speak. It’s like we are nobodies and not even human in their eyes. Being homeless is really, really hard. It’s humiliating, stressful and overwhelming at times. I have never been through anything like this in my life.”

Though Theiss said she receives food assistance, other necessities such as basic hygiene practices are not as forthcoming.

Food products for both consist mainly of pre-prepared, canned items, as there is no practical place to cook a meal.

Sustenance for their dogs usually comes from the kindness of strangers.

“There is a pastor here in town who provides a shower once a week, behind the Nugget for the homeless camp,” Theiss said. “There’s a restroom here across from the park and sometimes we would have to take what’s called a ‘bird bath’.”

“Sometimes we have to wear the same clothes for a straight week,” Theiss said. “Not having a steady income is obviously difficult because panhandling is against the law.”

Regardless of their situation, Holly said he and his wife try to look presentable each day because they’ve been offered temporary day labor opportunities for cash from time to time.

“Even though we are here outdoors with all of our stuff, my thing is I don’t want to have that homeless, disheveled, dirty look,” Holly said. “We try as hard as we can not to have that homeless look. Normally when you see a man or a woman out walking around with a backpack and a dog, the public’s first impression is that they are homeless.”

As far as dealing with the weather in Southern Nevada, both agree that all they can do to withstand the elements, is simply endure.

“Summertime is harder because there is no relief and then of course you have the flies swarming around all the time,” Theiss said. “It’s one thing when you see a man sweating profusely, but when you see a woman sweating, it’s not very pretty.”

Additionally, the couple said all homeless people are not lazy, drug-addicted alcoholics.

“A lot of people are one just paycheck away from being homeless themselves,” Theiss said. “A lot of people think we can sleep whenever we want and do whatever we want. Before I became homeless, I never realized how very hard it is just to do anything like finding somewhere to sleep or to be able to eat, or just to wash up and get yourself cleaned up. It’s hard. The uncertainty is one of the worst parts about it.”

“With me being the man, I want to provide for my wife, but it’s hard because I don’t want to leave her and the dogs by themselves in this heat or around strange people, especially here at Petrack Park. If I had to pick three things that I couldn’t live without, my wife would be one of them.”