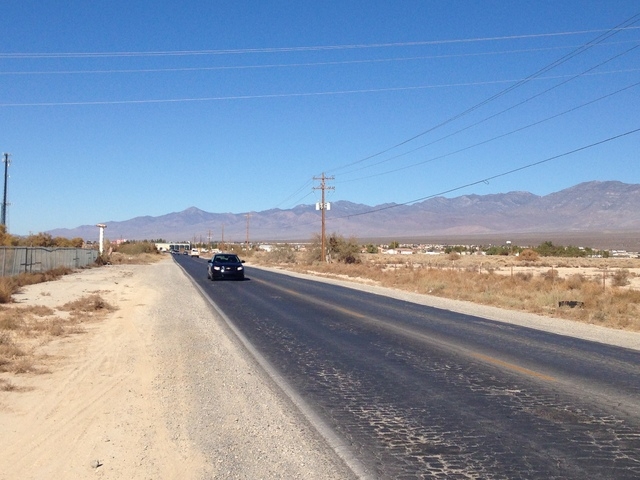 The Capital Improvements Advisory Committee for the Pahrump Regional Planning District last week recommended a $4.28 million road construction project planned for Homestead Road be moved to No. 2 on the list of roadways scheduled for improvement.

County Commissioners have been pushing to rebuild Homestead Road from Gamebird to Manse roads. Public Works Director Dave Fanning said Homestead Road was on the long-range planning horizon for the 2006-2015 Capital Improvement Plan.

“That was one item I was going to bring up today to see if we might put some priority on that one section of road from Manse to Gamebird, that way it would take Homestead to two and a half miles the length of improvements down to Manse Road to improve the flow through that part of the valley,” Fanning said.

Manse Road was bumped to the top of the capital improvement list in May 2013 to be completed by the end of 2015. The county began reconstruction work between Hafen Ranch Road and Fox Avenue recently. It has an average daily traffic count of 6,215 vehicles, according to the county.

The Capital Improvement Project recommends distributing impact fee money, which the fund sits at $3.27 million in it as of Sept. 30, according to a report by the county treasurer.

Charleston Park Avenue was second on the list for capital improvements and is now third, it has an average daily traffic count of 4,131 vehicles, which would require $1.1 million in impact fee money. Basin Avenue between Blagg Road and Highway 160 is fourth on the list. That project would take $1.39 million, according to current estimates.

The Nye County Regional Transportation Commission already approved reconstructing and widening a one-block section of Calvada Boulevard from Highway 160 to Mount Charleston Drive leading up to the county complex on the Calvada Eye, a $515,000 project using 4-cent gas tax money. That will also include bike lanes and extending sidewalks around from Highway 160. That was fifth in the CIP plan.

The sixth roadway in priority in the capital improvement plan is Blagg Road between Calvada Boulevard and Basin Avenue, a $2.9 million project. Seventh is Pahrump Valley Boulevard between Highway 372 and Calvada Boulevard, estimated to cost $1.71 million.

Nye County Planning Director Darrell Lacy said the Nevada Department of Transportation determined Mesquite Avenue and Highway 160 didn’t meet the merits for a traffic signal when the Corrections Corporation of America federal detention facility opened in 2010. When MM Development Company proposed plans last summer for a medical marijuana dispensary and cultivation facility on East Mesquite Avenue they offered to build a traffic light, but Lacy said now that their provisional license for a dispensary wasn’t approved by the state, a cultivation facility would have lower traffic volume.

“At this stage I don’t think it’s going to be any huge increase in traffic flow at that intersection for the medical marijuana,” Lacy said. “We were willing to analyze it when we were ready, but they didn’t think it was justified.”

The board also discussed the intersection of Highway 160 and Bell Vista Avenue, where motorists turn left on Highway 160 bound for Death Valley National Park.

Farther south, Kimball said the Capital Improvement Projects board had talked about a traffic island on Highway 160 to prevent through traffic traveling from Wilson Road to Oxbow Avenue across Highway 160. NDOT would like a recommendation from the county on that intersection, Lacy said. But he said it would be a little controversial forcing motorists to make a right-turn only from Oxbow or Wilson Avenue onto Highway 160, where they will probably make a U-turn on Highway 160.

“I know I will never make a left turn off of Wilson or Oxbow and I almost won’t make one off of 160 because the last two attempts to do so, cars have come up behind me at Oxbow trying to beat others in this suicide lane,” Kimball said. “On the other hand there haven’t been any fatalities there either. It’s not a high cost item.”

Koenig was worried people will cut through the Wells Fargo Bank parking lot and get onto Highway 160 from the Frontage Road.

Lacy said they could put in right-turn only signs on Wilson Road and Oxbow Avenue at the Highway 160 intersection. Kimball said many motorists would disregard the signs.