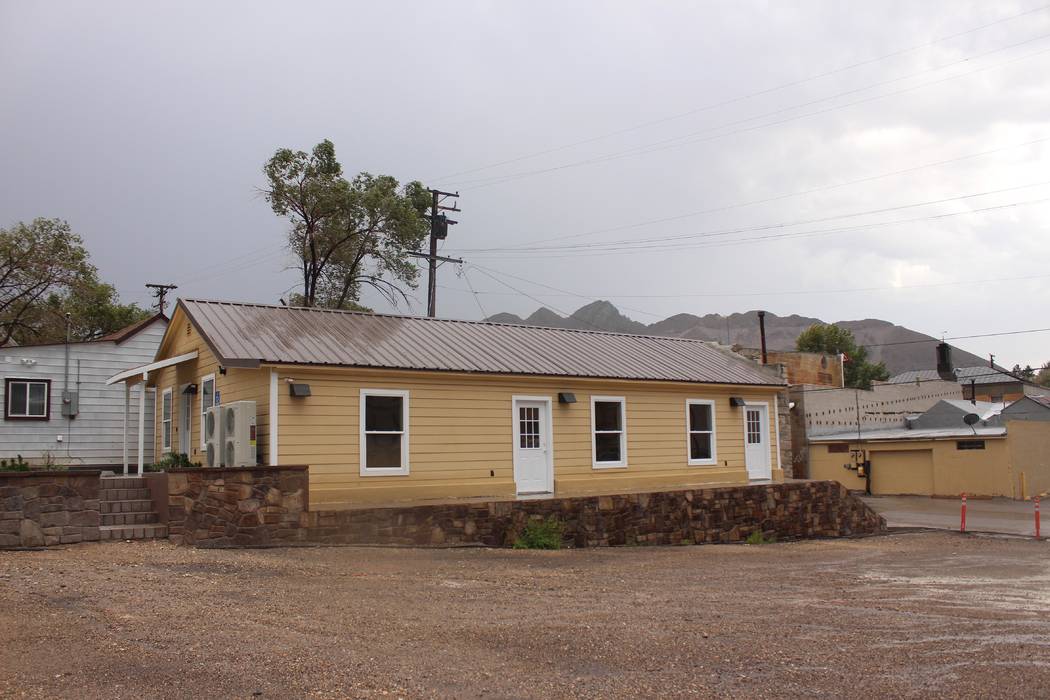 Jeffrey Meehan/Pahrump Valley Times The finishing touches are being put on the new hostel project on the southeast corner of Brougher Avenue and Mineral Street in Tonopah. No specific date has been given for the property's opening as of yet. 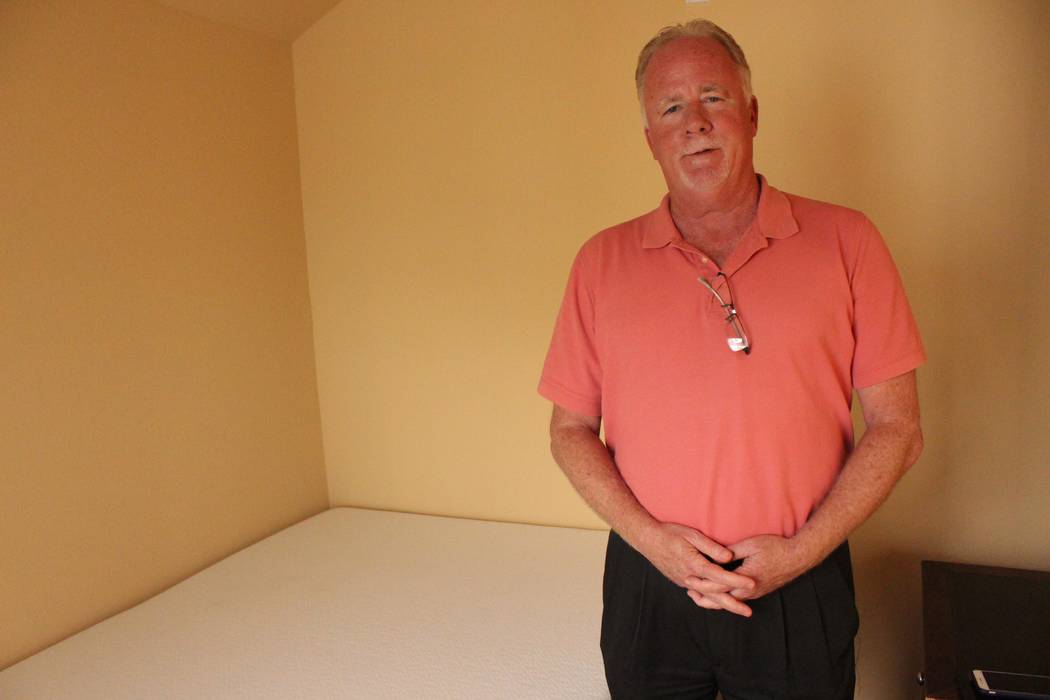 Jeffrey Meehan/Pahrump Valley Times John McCormick, general manager of the Mizpah Hotel, stands inside a single unit at Tonpah's new hostel project at the southeast corner of Brougher Avenue and Mineral Street. The project is being headed by Ramsey Kline, owner of the Mizpah Club casino. 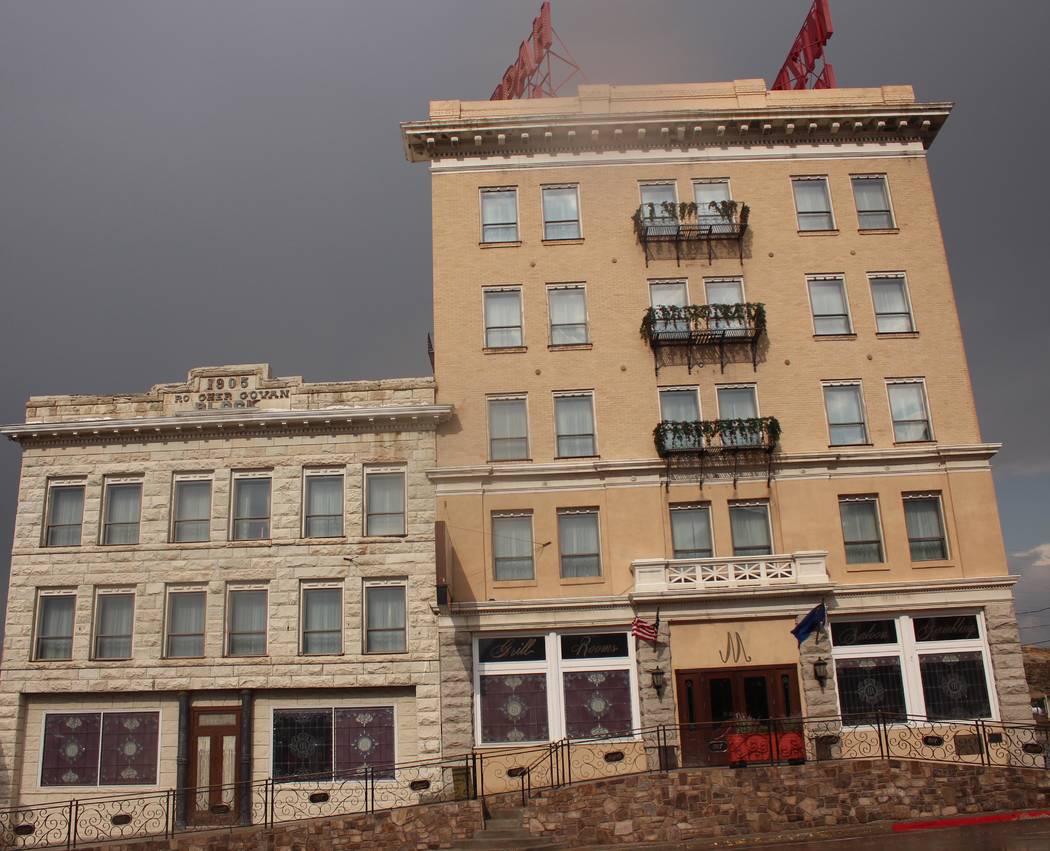 A different kind of project is taking shape in downtown Tonopah.

Mizpah Club casino owner Ramsey Cline is spearheading the completion of his hostel project, which sits adjacent to the Mizpah, at the southeast corner of Brougher Avenue and Mineral Street.

John McCormick, general manager of the Mizpah, said the 10-unit property will have eight rooms with full-sized beds for a single occupant and two with queen-sized beds.

Each room will also contain a 32-inch TV with DirecTV, a bed, dresser and access to a community bathroom and kitchen area, which has a refrigerator, microwave and a table for people to eat at.

Estimated costs to stay in the room are not that high, with projections in the mid-$30-to-$50 range per night. But nothing has been set.

The hostel is having the last few finishing touches put on but no specific date of opening has been announced yet.

McCormick said he hopes to capitalize on travelers heading to points south and north to stay at the spartan-style accommodations.

He is also hoping to gain interest from crew members staying in Tonopah who are working out at the Crescent Dunes Solar Energy Project, near Tonopah.

Owners of the solar plant announced plans to expand its current footprint in August, which could be good news for the hostel property.

“We certainly don’t have the mass business we had when they (SolarReserve) were building the other place, but they still do come through, they still have work to do out there at the site,” McCormick said.

The hostel could see subcontractors that do work at the plant or individuals working out at local mines take up residence there that may only want to stay during the week and head home for the weekend.

On the general tourism side of things, McCormick said he sees the property attracting younger European travelers that are looking for an “Old West” or outdoor-type experience: hiking, biking or four-wheelers.

“I think it’s going to be really good for us,” McCormick said.

The new property could also bring new clientele to the area.

“I think this can be a stop-off point, as they’re (travelers) headed to places like Yosemite and Mammoth, where they’re probably going to be staying in hostels in those markets anyway, McCormick said. “This could gear them toward Tonopah and all the things that we have here.”

Ramsey’s parents, Fred and Nancy Kline, made a move on the Mizpah hotel in 2011, bringing the property, which at that time had been closed since 1999, back to life.

The casino project opened in 2016. Nevada general contractor Bill Bunting led the effort on building that project out.