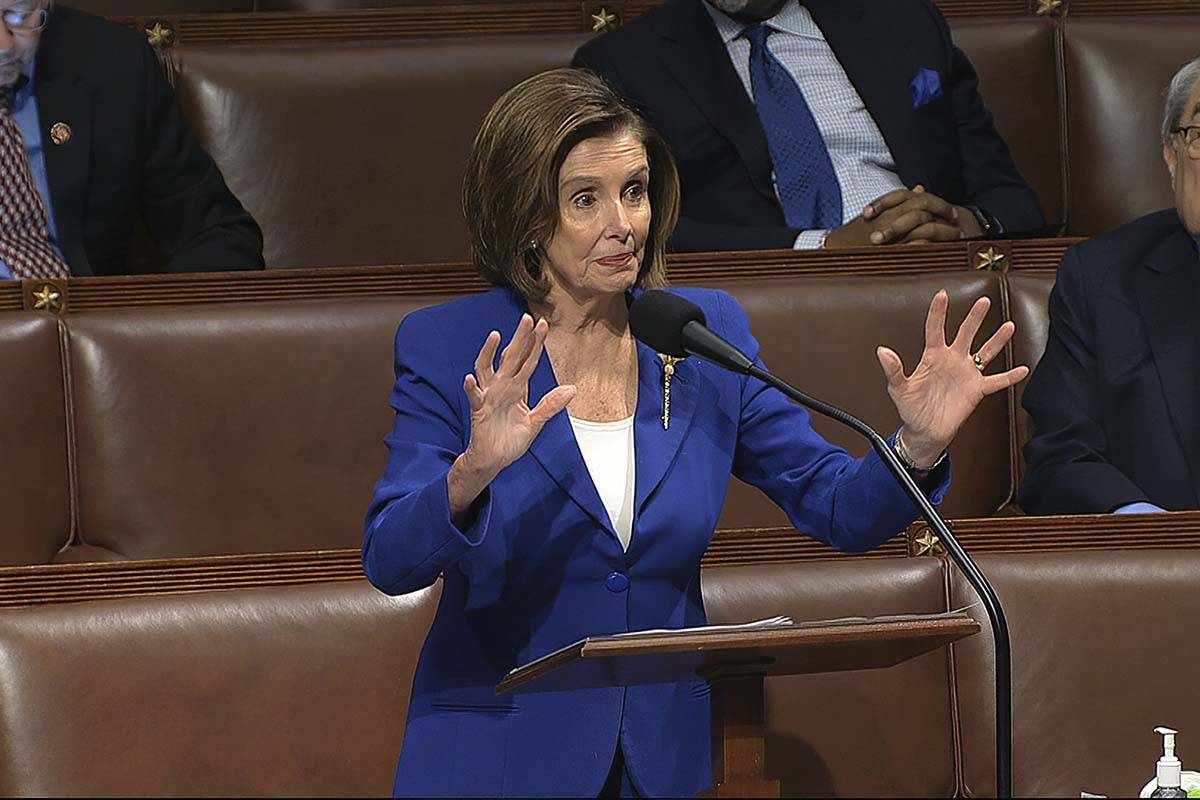 In this image from video, House Speaker Nancy Pelosi of Calif., speaks on the floor of the House of Representatives at the U.S. Capitol in Washington, Friday, March 27, 2020. (House Television via AP)

WASHINGTON — The House of Representatives passed a sweeping $2.2 trillion coronavirus relief bill Friday after lawmakers were forced to scramble back to the Capitol when a lone Republican bucked GOP leaders and threatened to force a roll call vote.

The House passed the bill on a voice voice with unanimous consent after a sufficient number or lawmakers returned to form a quorum.

Rep. Kevin Brady, R-Texas, the ranking Republican on the tax-writing House Ways and Means Committee, said time was of the essence as the death toll and number of unemployed due to the coronavirus pandemic continue to climb.

“We must act now, or the toll on lives and livelihoods will be far greater,” Brady said.

Highlights of the legislation include:

— $500 cash payment to most families for each child.

Leaders of both parties had hoped to pass the measure by voice vote to accommodate members scattered around the country and reluctant to risk flying back to the Capitol.

But Rep. Thomas Massie, R-Ky., announced Thursday that he would request a roll call vote, citing constitutional concerns that lawmakers record their vote on such a massive spending measure that will significantly add to the nation’s debt.

Massie’s move forced lawmakers to scramble to get back to the Capitol to be ready to vote.

As hospitals and health care workers struggle with staggering numbers of infections, which surpassed 85,000 people, Rep. Dina Titus, D-Nev., said on the House floor that the bill provides “the resources they need.”

Rep. Steven Horsford, D-Nev., also took the floor to tout the bill’s increase in unemployment benefits and financial help for families struggling with the economic fallout of the pandemic.

“This body is here to send a united message to the American people,” Horsford said. “Help is on the way.”

Horsford said the bill increases unemployment benefits by $600 and extends the length of unemployment from three to four months.

“We are going above and beyond for our country’s workers,” Horsford said.

The Senate passed the bill, 96-0, on Wednesday. The unanimous vote followed days of delay brought on by Democrat and Republican senators who sought to tweak the bill over ideological programs and spending.

House Speaker Nancy Pelosi, D-Calif., and Minority Leader Kevin McCarthy, R-Calif., sought to expedite the bill’s passage in the House, where it enjoyed strong bipartisan support, with a voice vote to keep lawmakers from traveling back to the Capitol from recess in their districts and avoid unnecessary exposure to the coronavirus.

And McCarthy warned Republicans to return and prepare to vote on the bill because of the likelihood that at least one member would request a roll call.

Pelosi also told House Democrats on a teleconference call to be prepared to return.

With passage, the bill now goes to Trump, who has said he would sign the bill into law.

Conditions on the assistance provided by the bill would prohibit the president, White House officials, members of Congress or their staffs from receiving federal funds or loans in the package.

Language was also included to prevent companies from using the aid for stock buybacks or executive compensation, a situation that marred the 2008 Wall Street bailout.

Nevada casino, hotels and tourism businesses would be eligible to apply for assistance designed to protect workers from layoffs and keep large companies solvent. The state’s lawmakers and the Las Vegas Chamber of Commerce had lobbied for the aid.