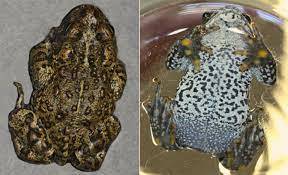 A proposed lithium production project would push the Nevada Railroad Valley toad — a newly classified groundwater dependent species — out of existence, according to environmental activists and others who aim to protect the amphibians.

A petition has been circulated by the Center for Biological Diversity to protect the toad under the Endangered Species Act (ESA).

The toad was classified in 2020 as a frog native to the scattered wetlands ofNye County’s Railroad Valley. The toad’s population is unclear at the moment, but is expected to be low. Although the species inhabit about 445 acres, they are isolated in the arid desert.

“What’s partly crazy about [the new description], is that we’ve just begun to learn about this toad and now it’s already at risk of potentially going extinct if we didn’t do something,” a senior scientist at the Center for Biological Diversity, Krista Kemppinen said.

Several companies are staking claims to dig for lithium in Nye County, but one has already applied for groundwater rights, according to the scientist. The project would be less than 10 miles away from the toad’s habitat, where the company plans to pull billions of gallons of underground water that provide spring flow for the toads.

“[Companies] need to be located in places where they do the least amount of damage, whilst minimizing water consumption, increasing recycling,” Kemppinen said. “We’re definitely not against lithium, because we need lithium for batteries which are needed for electric cars and hybrid cars and storing energy off of solar panels.”

Kemppinen believes that the mining of lithium is a critical component of renewable energy transition — a component of meeting ambitious federal climate-change goals. But there’s a need to ensure that mining doesn’t come with a price tag of extinction for some species, said Kemppinen.

The Center for Biologial Diversity’s 36-page petition addresses some members of the U.S. Fish and Wildlife Service and the U.S. Department of the Interior and requests the Railroad Valley toad be declared an “endangered species.”

It’s a bureaucratic process that could take more than a year as officials and others consider the evidence to protect it.

The U.S. Fish and Wildlife Service is in the midst of making an initial determination on the merits of the case.

“These things get denied.” Kemppinen said. “What has happened a lot in the past is sometimes the U.S. Fish and Wildlife Services say, ‘Yes, we recognize that the species needs protection, but there are higher priority species at the moment,’ so they’ll kind of put it on the back-burner.”

The Center for Biological Diversity is worried about the 40 new water rights applications that were recently submitted by 3PL Operating Inc. The company has partnered with Ameriwest Lithium, an exploration and development company which has now secured 13,580 acres of land.

This increase of land comes from the land that American Battery Technology Company, once known as LitiumOre Inc, owned the rights to. The company had 224 claims which added to the 686 claims that Ameriwest Lithium has the rights to.