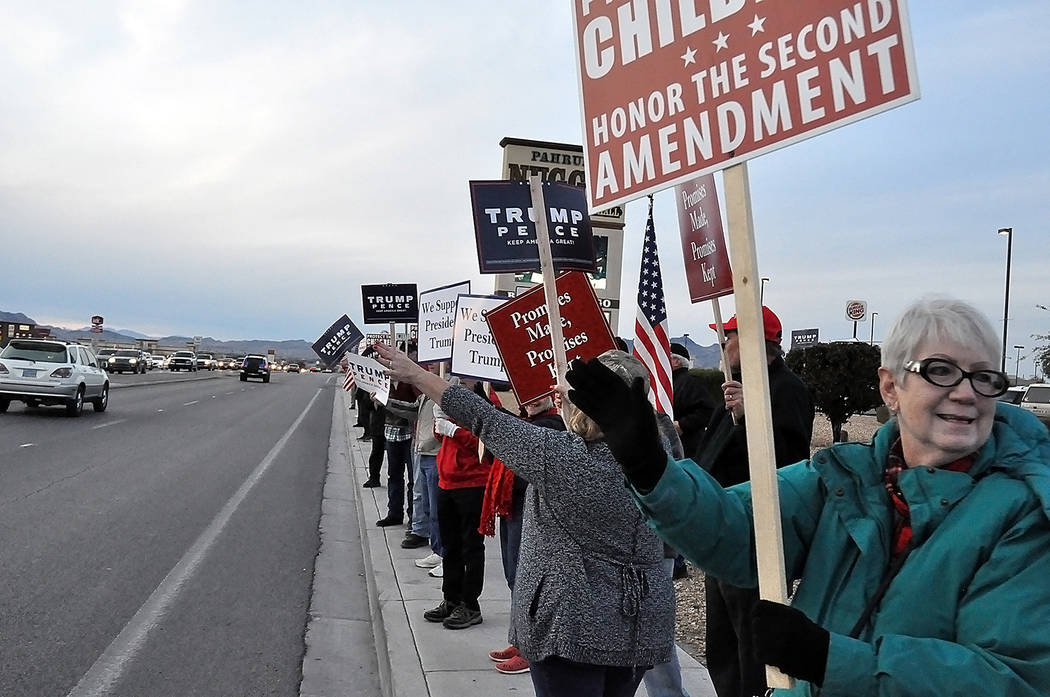 Horace Langford Jr./Pahrump Valley Times - More than 50 local residents turned out to protest the impeachment of President Donald Trump. Many passing motorists blared their horns in support of the rally. 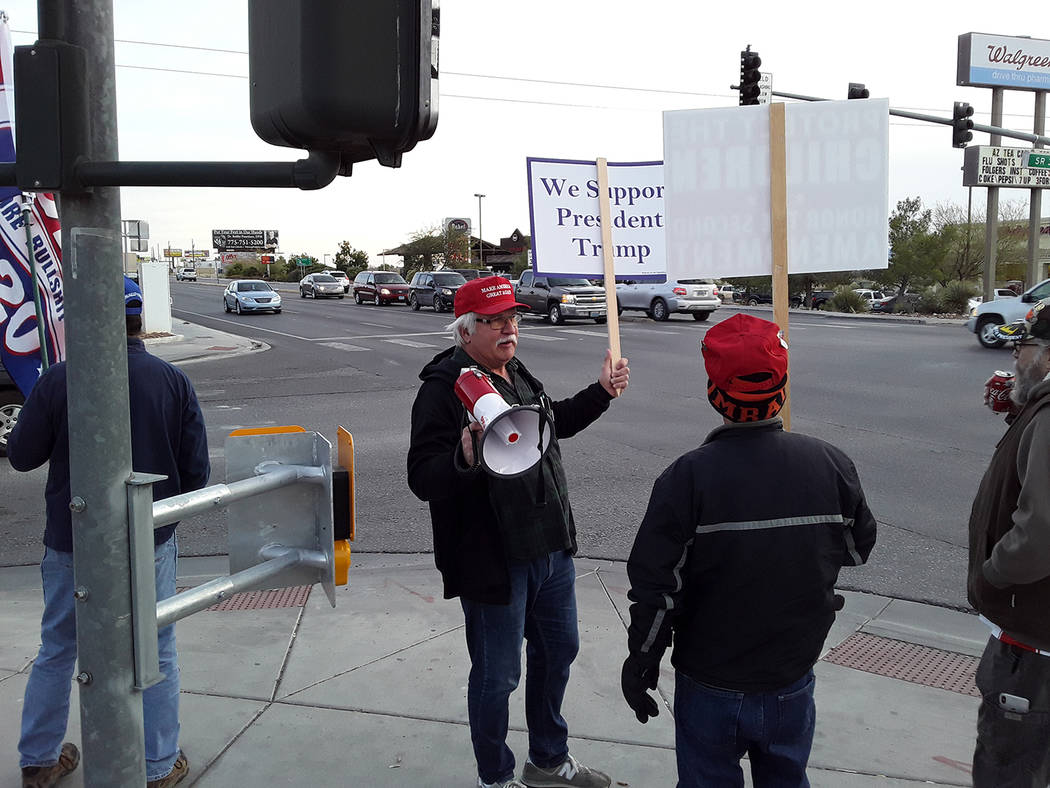 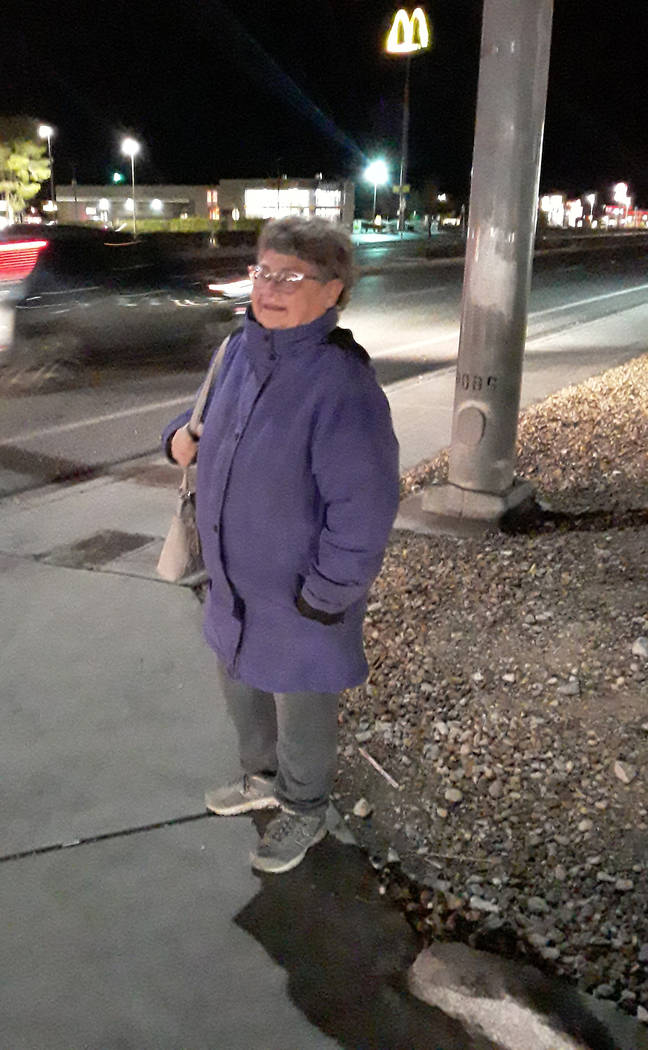 Selwyn Harris/Pahrump Valley Times Clad in a warm lavender coat, Patricia Marzoline, standing all alone, said the absence of additional pro-impeachment protesters was unfortunate, and left her speechless at 5:30 p.m. on Tuesday evening. 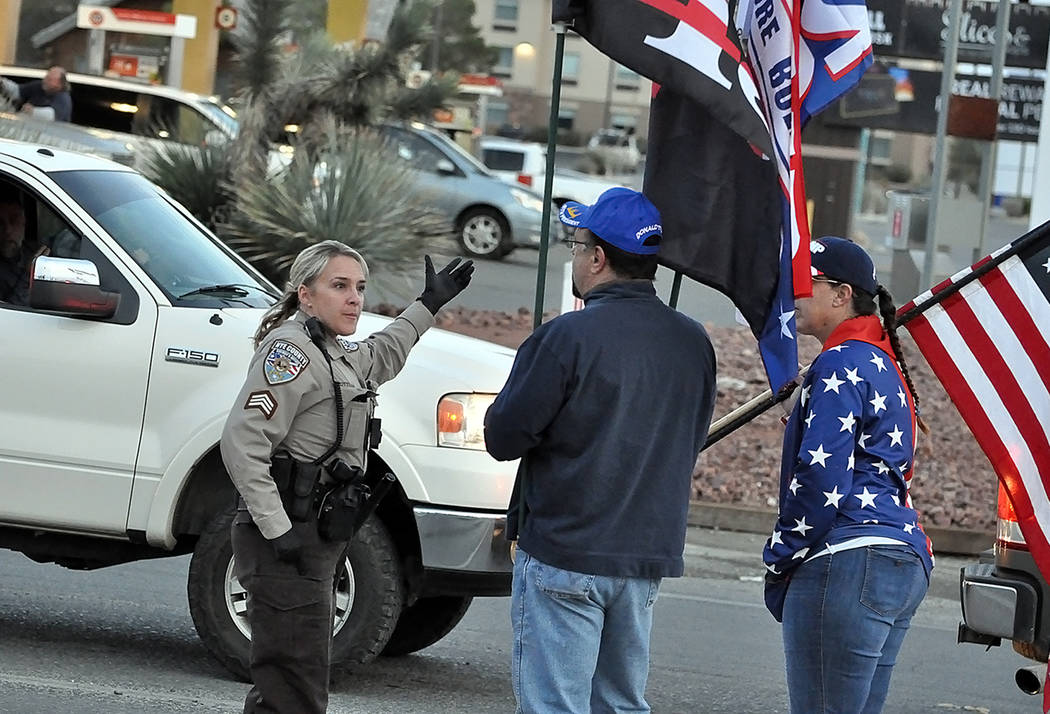 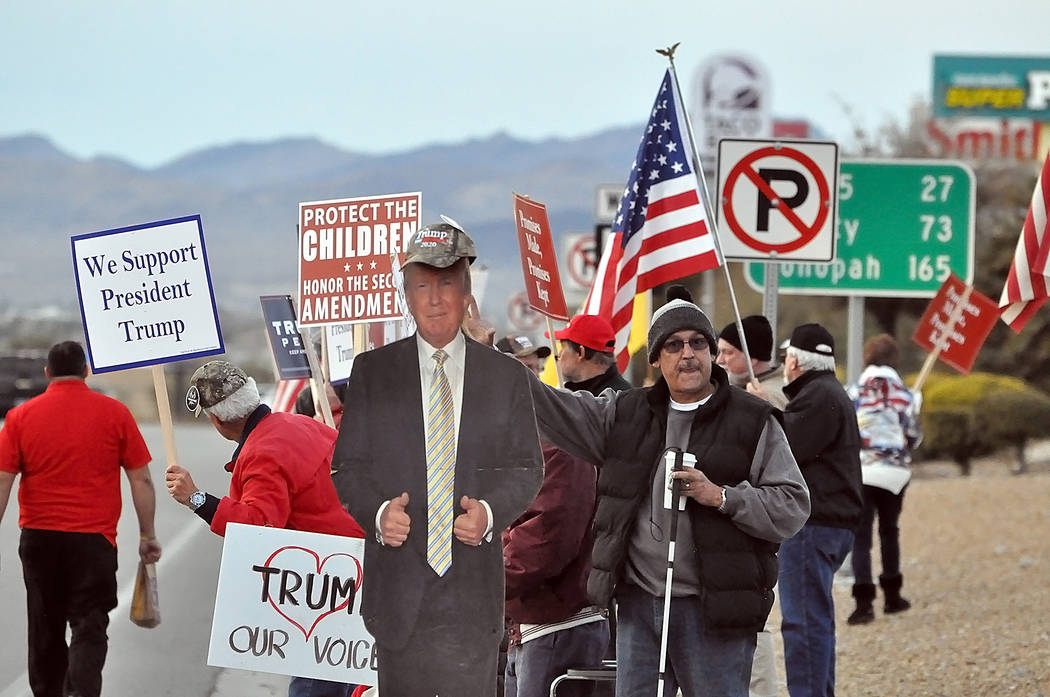 Horace Langford Jr./Pahrump Valley Times Once word began to spread about one event, a group of anti-impeachment individuals decided to counter that rally with a 4 p.m. Weenesday pro-Trump rally at the same location.

On the eve of the House of Representatives impeachment vote, a scheduled rally supporting the impeachment of Donald President Trump, did not quite go as planned earlier this week.

Dubbed the “Nobody is Above the Law,” rally, Pahrump residents, by way of social media, were urged to gather at the intersection of Nevada Highway 160 and Crawford Way on Tuesday, Nov. 17, to express their respective thoughts and feelings about the president.

The effort, part of a grassroots nationwide appeal for Congress to hold the president accountable for using United States military aid to pressure the Ukrainian government to interfere in the 2020 elections, attracted a grand total of just one local resident.

It should be noted that the U.S. House of Representatives, on Wednesday evening, voted to impeach Trump, charging him with abuse of power and obstruction of Congress.

The action makes Trump the third president in U.S. history to be impeached.

A trial in the Senate is expected to begin in January.

Bundled in a warm lavender coat, on Tuesday evening, Patricia Marzoline said the absence of additional pro-impeachment protesters was unfortunate, and left her speechless, while noting that the cold weather may have played a factor in keeping people away.

“This is very, very sad,” Marzoline said. “I don’t know what else to say right now. I did not vote for Trump because I’m a Democrat and I don’t cross lines. I didn’t like him in the beginning and I don’t like him now. More so, to me he is vile. I think he is destroying the country.”

Efforts to contact the local organizer of the pro-impeachment rally were unsuccessful by press time.

As announced on social media, the pro-impeachment rally was scheduled to take place at 5:30 p.m. along the intersection.

Once word began to spread about the event, a group of anti-impeachment individuals decided to counter that rally with a 4 p.m. pro-Trump rally at the same location.

“This rally came about because of the impeachment hearings in Washington, D.C., and frankly the Republicans feel that President Trump has not been treated fairly,” Burdzinski said. “He hasn’t had his equal hearings as he should, and as with most Americans, would be guaranteed. We decided that it’s time for us to speak up and support the president, and stop the impeachment.”

Since his January 2017 inauguration, Trump has received criticism for the harsh language he uses to describe certain individuals during rallies and when speaking to the media.

Over the ongoing impeachment inquiry last month, the president accused investigators of being “human scum.”

Past references from the president include “horse face,” to describe adult film actress Stormy Daniels, and “rat,” to describe his former longtime personal attorney and “fixer,” Michael Cohen after Cohen cooperated with prosecutors, regarding so-called “hush money” payments to Daniels and former Playboy model Karen McDougal during the 2016 U.S. presidential election campaign.

“I heard that he said some things,” Burdzinski said. “People do say things, sometimes they shouldn’t say that are harmful. Nobody is above the law. The president supports all Americans equally. I don’t think the president is guilty of anything.”

Regarding the perceived pro-impeachment rally, Burdzinski suggested that it’s OK to have differences of opinion.

“I think we should talk even if we disagree with each other,” he said. “I don’t agree with my wife 100 percent of the time, but I still love her. We are all Americans. We may have our differences and opinions, but we are all entitled to them.”

Trump supporter Tina Trenner, who said no one is above the law, noted that she is not fazed by Trump’s language.

She also spoke about her strong opposition to globalism, which is defined as the operation or planning of economic and foreign policy on a global basis.

“I don’t care,” she said. “What he has to do is to move globalism out of this country and take us back to a constitutional republic, and if his words offend people, I don’t care. I want a constitutional republic again, and he is trying to re-establish that by draining the swamp, and the swamp is globalism. Whatever it takes. Is globalism something that we want to live with? With our country completely being devoured by globalists? No. If it takes his big mouth, I am all for it.”

End of the line

“I have been working with the campaign supporting Trump for a long time,” Knowles said. “Trump has done a lot for us, and particularly in the rural issues. He has totally overhauled the Department of the Interior, which is helping a lot of people that we associate with out here. As far as his name-calling, he should be above that and you should put that in context. You have to understand what has been going on for the last half-century in this country. With the liberal and socialist agenda, everything is being programmed in our kids. It started in the 1970s and it is still strong today.”

Roughly 17 minutes after the rally began, what sounded like two gunshots were heard several hundred yards south of the intersection.

A marked Nye County Sheriff’s Office unit responded to the area, but the sheriff’s office has yet to release any information on what was determined.