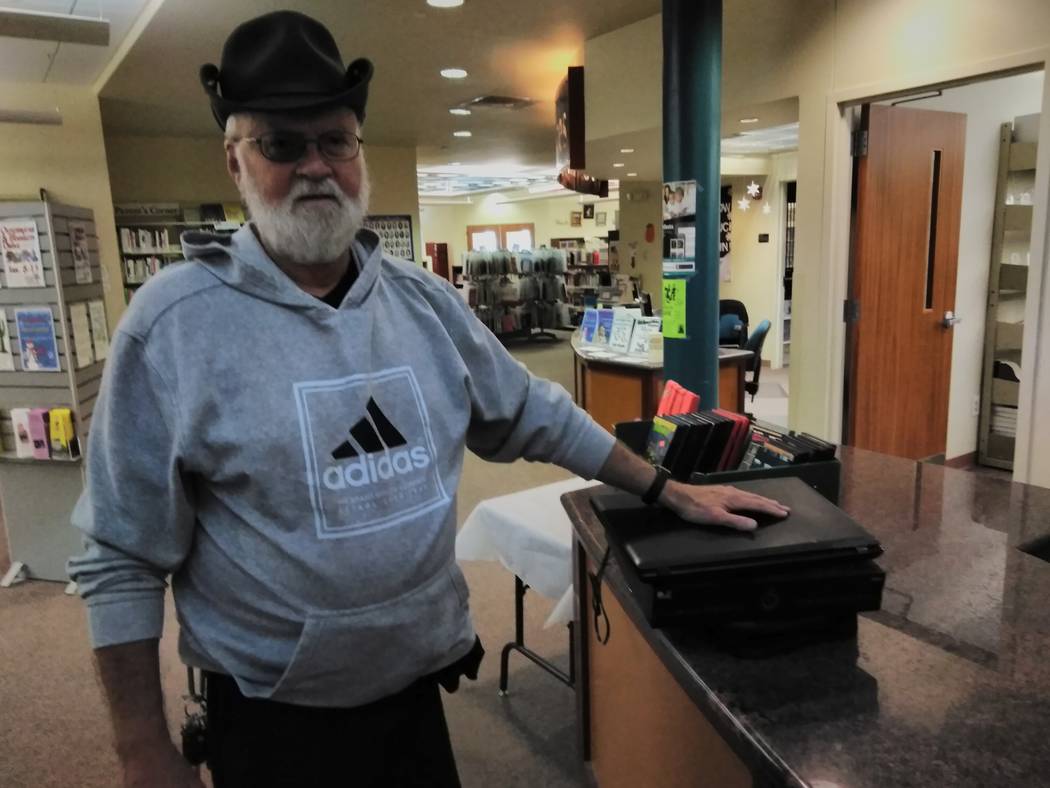 Selwyn Harris/Pahrump Valley Times Local resident Gil Knappmiller turned in several electrical devices including a converter box and several old computers during the Pahrump Community Library's "E-Recycling" event on Jan. 6. Knappmiller was one of scores of residents who took advantage of the library's inaugural e-waste event.

From adaptors and chargers to video equipment and everything in between, representatives from the Pahrump Community Library were seeking virtually anything electronic for its inaugural E-Recycling event on Jan. 6.

As defined by the Environmental Protection Agency, “e-waste,” is a term for electrical equipment nearing the end of its useful life.

Most, if not all of the components, can be reused, recycled or refurbished, said Nevada State Recycle General Manager Charlie Bennett, who spent the day loading up the donated items.

“Things went great today,” Bennett said during a lull. “When we pulled up this morning we had about 15 cars waiting while another 15 to 20 more cars have since dropped items off. It has been a great turnout and it really exceeded my expectations. We have done a few of these in the past at other locations and we did not come close to collecting what we have collected today.”

Pahrump Community Library Reference Clerk Amy Bruno made the effort to reach out to Bennett to set up the recycling event.

“I did some research and I got in touch with Nevada State Recycle because I liked what they were doing and I liked their business model,” she said. “It also seemed like something that was very much needed here at the library.”

Bruno also commented on how the community reacted to the library’s first-of-its-kind e-recycling event.

Bruno also said she hopes to host another recycling event later this year.

“We had all kinds of different items arriving here even before the library opened this morning,” she noted. “I was surprised to see that some people just left their items at the door to be recycled. I hope to do this again in September. I was kind of concerned today for the people who dropped off their electronics and just left, because it doesn’t take much to grab somebody’s laptop or phone to gain access to someone’s personal information.”

Pahrump resident Pablo Petersen waited patiently for some assistance carrying his donations to the drop-off area on Saturday, as he turned in several electrical devices for recycling.

“What I dropped off was outdated and not working anymore, except for the boom box which is still in good working condition, but I can’t use it,” he said. “I also turned in some DVD players, a couple of printers and an old VCR.”