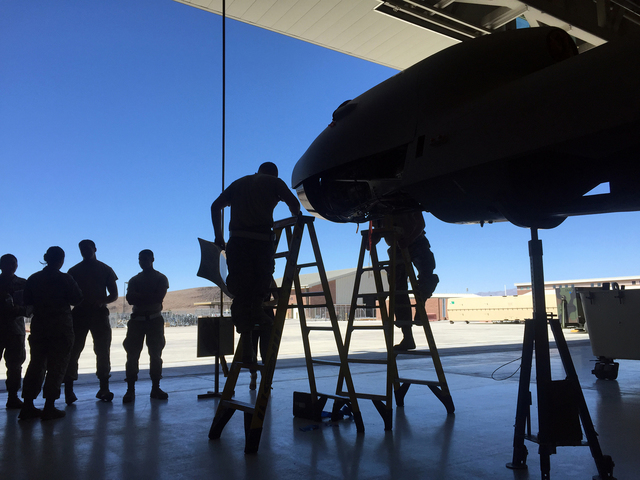 Airmen assemble the airframe for an MQ-9 Reaper remotely piloted aircraft in June 2015 inside a hangar at Creech Air Force Base, 55 driving miles northeast of Pahrump. Keith Rogers/Special to the Pahrump Valley Times

Campaign promises of job gains mean comparatively little in the town of Indian Springs, a few short miles away from “Casino City.” That’s because the town has consistently maintained high rates of medium, well-paid employment in a vastly slower-paced environment all the way through the recent recession and beyond.

Candidates for national offices can generally be counted on to discuss jobs. Employment rates, hourly wages, companies moving overseas, being able to support one’s family, these are all topics high on the list of election promises. And candidates for local office don’t shirk the situation either. But that doesn’t translate into many Indian Springs votes.

Much of the town’s steady employment was and is due to government investments. With little fanfare, starting around 2007, the Department of Defense poured some $700 million into Creech Air Force Base, located right on the town’s main highway. The cash infusion expanded the base from about 400,000 square feet of facilities up to as much as 3.6 million square feet. Ever growing, there are another 1.2 million square feet currently being developed. And that space holds a lot more aircraft, requiring pilots, co-pilots, mechanics, maintenance personnel and security staff among other job openings.

The High Desert State Prison is located a short eight miles from the town. In 2009 it expanded its space by one-third at a reported cost of $300 million. It’s one of the largest prisons in the nation at 1.6 million square feet and the most secure in the state’s corrections system. As with the Air Force base, expansion means additional personnel was needed to staff the facility. Worker count at the three major employers is estimated at 6,440. And that doesn’t include additional numbers of non-government employed residents of Indian Springs. Activity at the Test Site is top secret, but the site has diversified into such areas as response training, waste management and environmental studies. Its base location has more than 1,000 buildings and other facilities that house 1,200 employees.

Employment in Las Vegas has traditionally centered on hospitality industries, which often pay well but do not always require formal higher education, and also lower paying positions in service industries such as fast-food, convenience and big-box stores. Unfortunately, there are thousands of unemployed individuals who still find it difficult to even obtain those positions. But Indian Springs continues to speed right on through the nation’s economic downturn with a strong rate of employment.

And the Indian Springs workforce has been credited with coming close to buying 500 homes annually. But, not in the town itself. With little new local housing, the employed residents have been buying in Las Vegas.

Employees there have long reached out for developers to build homes locally to negate their twice-daily commutes. Together the workforce creates a combined economic impact of $1.2 billion on the economy of Southern Nevada, and the financial impact doesn’t stop there. The workers, directly and indirectly, support an estimated 10,100 jobs and a payroll of $498.1 million each year.

Taken together, the three employers impact 70 percent of the much-publicized Faraday electric automobile project going up in North Las Vegas. That plant won’t be completed for several more years, while Indian Springs enterprises can boast of being fully operational.

Full employment in Indian Springs and its environs doesn’t stop at its three main employers and local businesses. That’s because the prison itself is associated with three additional employment centers — the Southern Desert Correctional Center that houses medium custody individuals and offers education and rehabilitation; the Three Lakes Conservation Camp that supplies minimum custody and work release offenders to the state’s Division of Forestry, who assist with projects; and the Three Lakes Valley Boot Camp, a 180-day program allowing judges the opportunity to sentence non-violent, first-time offenders charged with lesser crimes a chance to become productive citizens without spending time in prison. Those three facilities alone are responsible for hundreds of paid positions.

According to Nevada’s Employment Security Division, the leading employment sectors for males in descending order from top to bottom are transportation, warehousing and utilities; construction; wholesale and retail; education, health and social services. Employment for women has fewer categories: Miscellaneous and general unnamed industries; wholesale and retail; construction; education, health and social services.

It is believed that some employment numbers in Las Vegas and elsewhere have come down statistically due to individuals who have given up looking for work. They are therefore no longer officially counted as unemployed. But if they would still prefer to be working, Indian Springs may be a place to try once again. It weathered the downturn and continues to grow.