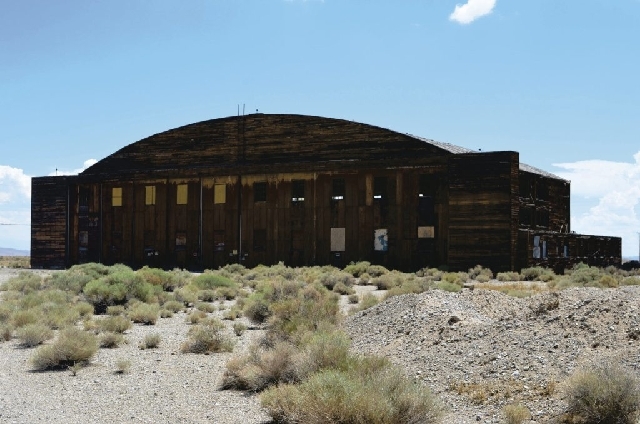 A District Court judge ordered a temporary injunction against the sale of a 70-year-old Tonopah airport hangar during a short hearing Monday.

Jim Prudden, 73, was ordered not to sell the 13,800 square-foot building until issues involving the property’s title are cleared up.

Prudden claims he owns the building and the land underneath it. County officials say the property was never legally sold to Prudden and in fact is government property that could revert back to former owner, the U.S. Defense Department, at any time.

Judge Robert Lane set a future hearing in the matter for Nov. 25.

“I’m going to issue an injunction that’s going to say that you are not to attempt to sell the property or to destroy or to do anything else with it. We’re going to freeze everything until we have that November hearing,” the judge said. “I’m not saying you can’t use it. I’m just saying you can’t sell it to anyone else.”

After the brief hearing, Prudden said that he was hoping the issue would be resolved instead of pushed forward.

Goldfield resident David Beth was with Prudden in court to support him. He, too, was unhappy with the outcome.

“He drives from Elko, I drive from Goldfield to be here for five minutes. You have to be kidding me,” he said.

Beth says he is watching the dispute because he was an occupant of another hangar at the Tonopah airport, one already owned by the county. He says he was given short notice to leave, because the county wanted the property for a museum.

“Nye County already took over the first hangar as you come into the airport. Myself and another gentleman were in there with our aircraft and the county gave us a week’s notice to get out. They were going to turn it into a museum. They put a chain link fence around it. It will sit there and rot before the county ever makes a museum out of it. They don’t have the money. Now they want his hangar,” Beth said.

Prudden sat down with the Pahrump Valley Times and showed a reporter a number of documents he claims proves the county doesn’t own the hangar.

First there is the matter of a quit claim deed from 1949. The U.S. Air Force simply deeded the Tonopah airport land as well as at least 16 structures to Nye County. Prudden’s hangar, T-2430, is not among the buildings listed.

Prudden says he can trace private ownership of the hangar back to 1965 to a man named Rex Williams.

In 1978, Williams sold the property to Tonopah resident David L. Pruett for $10, according to a bill of sale Prudden possesses dated Dec. 4, 1978.

Prudden says he bought the property from Pruett in August 1979; a document recording the sale is also in Prudden’s possession.

Tax records indicate Prudden has paid taxes on the building for 32 years. In 2004, he filed an application for full interest and title to the property as well. That was recorded by the Nye County Clerk’s Office on June 28, 2004.

The longtime mining engineer and geologist says he has sent requests to county officials to resolve issues with the title for a number of years with no response.

Now, due to poor health and mounting medical bills, Prudden would like to sell the building and land and retire.

He believes the county is simply aiming to take the building and lease it to a commercial interest.

Prudden previously said he has a tenant already in the building, a pilot who periodically places his plane in the World War II era hangar. A number of people have approached him about buying the building, the potential sale of which prompted the county to file suit to take title to the property, he says.

Besides a cloudy title, official records showing where the hangar sits on the property are inaccurate, potentially causing more headaches for all involved.

District Attorney Brian Kunzi said previously Prudden is mistaken in his ownership claims, that the property could never have been legally sold to him and that now, since he is attempting to sell it, he must be evicted.

“The DA’s office is not trying to take ownership. As legal counsel for the county, we filed an action to quiet title for the county and to evict Mr. Prudden from the property,” he wrote in a response to queries last week.