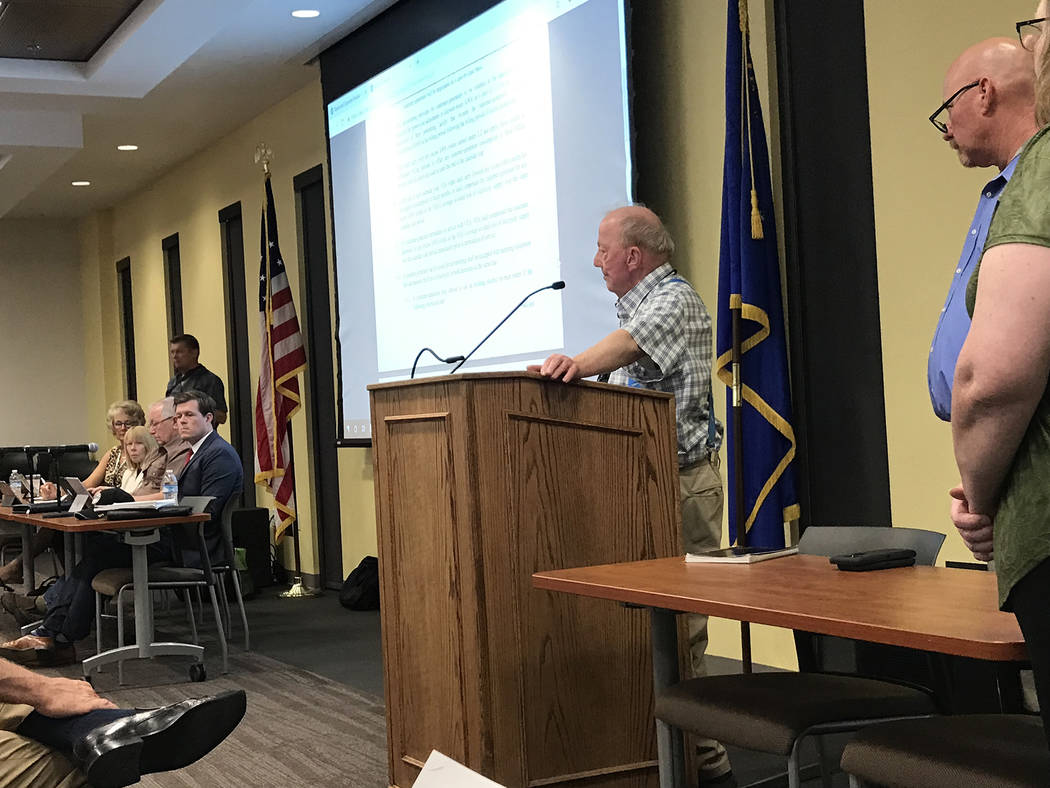 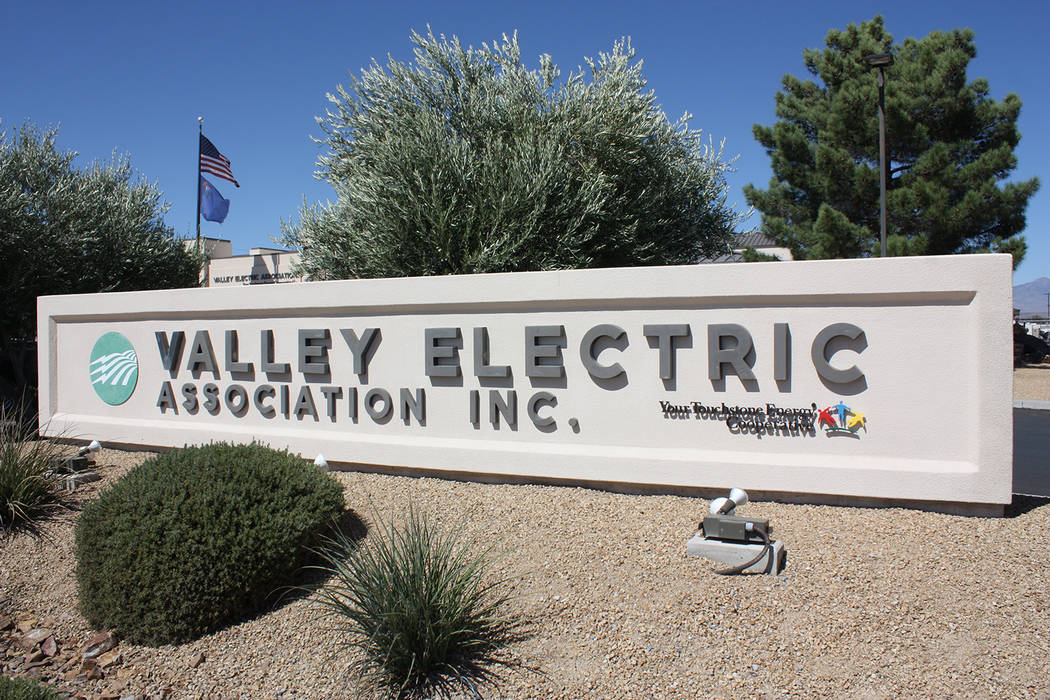 Robin Hebrock/Pahrump Valley Times Terrie D'Antonio, District 5 director for Valley Electric Association Inc., has assumed her role as interim CEO of the co-op. She takes over as Interim CEO Dick Peck departed at the end of October. 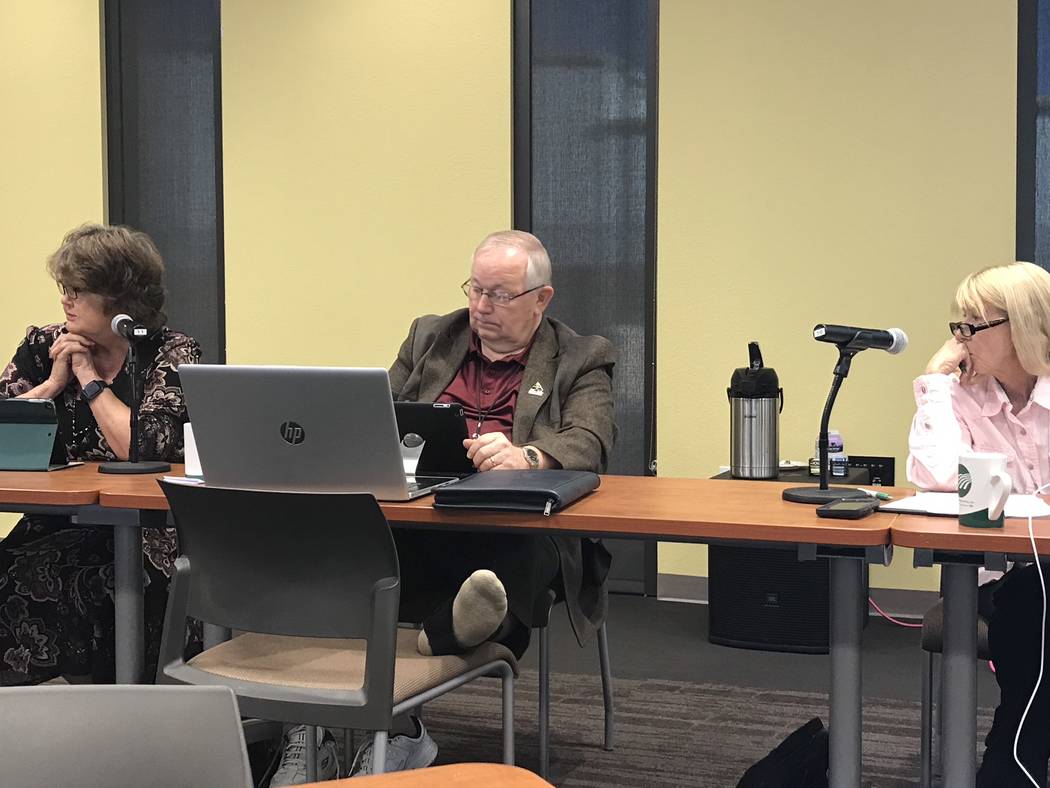 Jeffrey Meehan/Pahrump Valley Times Terrie D'Antonio (left), District 5 director for Valley Electric Association Inc., at a Sept. 19, 2019 board meeting. D'Antonio was named as interim CEO with the departure of Interim CEO Dick Peck at the end of October; it's expected that a permanent CEO will be chosen by Thanksgiving and be in place no later than early January. 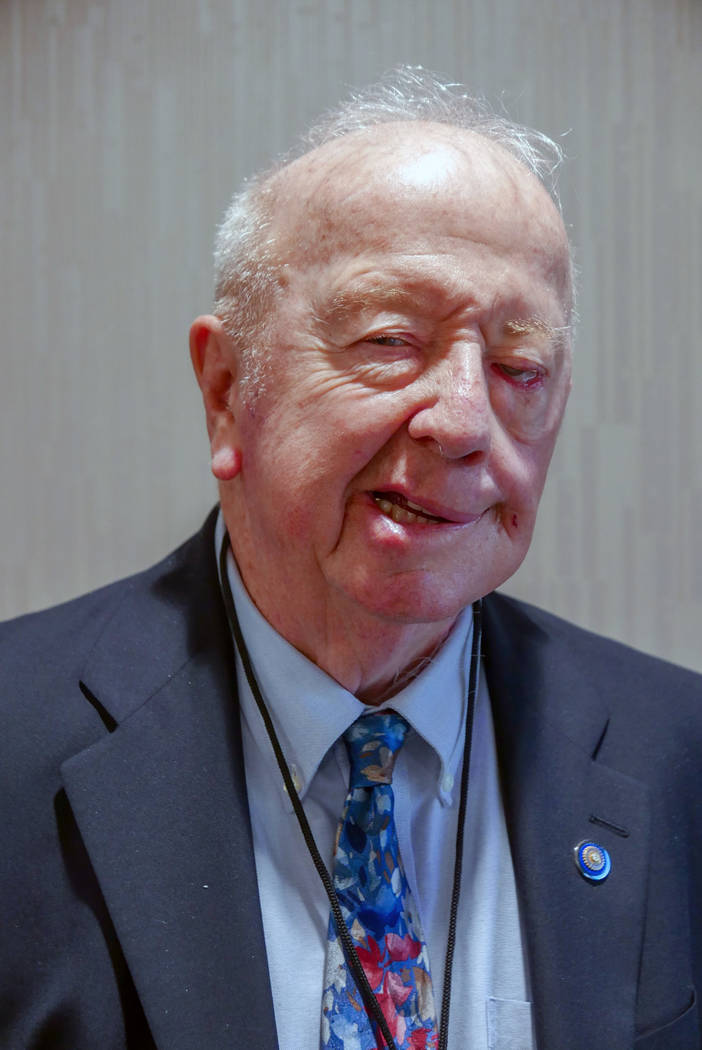 Dick Peck, the interim leader of Valley Electric Association Inc., forecast a bright future for the rural electric co-op on his departure.

Peck’s contract with Valley Electric expired at the end of October, but he sees some of his work during his eight-month tenure at the co-op living on, especially for the membership.

“The membership has now more chances to be heard than ever before,” Peck said in an interview from his hospital room at Desert View Hospital, where he was being treated for ongoing health issues at the end of October. “That’s my legacy.”

Peck spoke positively about reducing the co-op’s debt and on the future growth that he sees heading to the Pahrump area.

Most pressing is the board choosing the next CEO; Terrie D’Antonio, District 5 director for Valley (Sandy Valley), became the interim CEO of Valley upon Peck’s departure.

Peck said that the board is working their way through some 58 applicants to fill the CEO position permanently.

In a letter addressing the membership, D’Antonio said, “The board of directors will select our new CEO by Thanksgiving with a plan to have that person on board no later than the second week in January.”

Members and family members will have an opportunity to meet Valley’s new CEO at the annual district meetings in March, according to the letter.

D’Antonio is the sixth leader of the co-op to be named since May 2018. She is not being compensated monetarily for her temporary position as CEO, she said in previous interviews.

Peck, of Kenai, Alaska, said if he was younger in years, he would apply for the position.

“I’m really, really pleased to leave it (the co-op) in dang good shape,” he said “I wish I was 30-something because I would apply.”

During his time at the co-op, which began in March, Peck has worked to bring transparency to Valley Electric. The 47-year veteran in the public power industry worked to put information for members to view online, such as financials and other documents.

“You’re in good hands, and going forward, and I really encourage the membership to be continually involved in these board committees,” Peck said.

Peck said, “I leave with great respect of the employees and the new board and had a great time with the community of Pahrump.”

Peck said he got things turned around at the co-op.

“Again, that’s a reflection of the changes that we’ve made in the organization and the transparency,” he said. “I told them (members) anything you ever want to know that’s going on at the co-op, it’s online, and that’s where it always should be. There’s no secrets here; other than I can’t talk about personnel issues, and I cannot talk about contracts.”

Where is the money?

Peck said one of the questions he has received in the early months of his time at Valley Electric is where the money went from the sale of their 230-kilovolt transmission system for roughly $200 million.

One of those places was to pay for the expansion of high-speed broadband and fiber-optic lines in parts of Valley’s service area.

Valley Communications will not break even until late 2021, according to Peck.

“Then, as I told the current board, they need to start collecting money back from Valley Communications to the tune of at least $3 million a year to pay back all the things …,” he said.

Peck maintained that there were no financial improprieties with the co-op.

“There was no financial skullduggery, but literally, when you’re rolling out that size of an organization, literally all that money, which now it’s the member’s money, is involved in the communications company,” Peck said.

According to previous releases by Valley, a lot of the money from the sale went to pay down debt and other items.

On the communications side, new members are being added.

Peck said he is critical of actions by Valley Electric’s prior CEOs, with the exception of the decision to bring broadband and fiber-optic to the Pahrump Valley.

“I am critical of the prior CEOs with the exception of one thing, putting in the fiber and the Wi-Fi, we are a step ahead of most rural electric co-ops across the United States,” he said. “That will give us at Valley so much to do and to get more and more operational efficiency on controlling the system.”

Peck reiterated his point on the broadband expansion later in an interview with a reporter from the Pahrump Valley Times.

“Again, because of the value and the quality of broadband that Valley has out there,” he said. “The membership of Valley Electric are in very, very good shape going forward. Will there be rate increases? Possibly. Will there be opportunity to be involved? Absolutely.”

Future of co-op and challenges

Peck sees the debt falling in the coming years.

“Going forward, because of all the things that we did for Valley Communications, every day, we get a dollar ahead, so to speak,” Peck said. “Cash flow is increasing and improving, and we’ll be paying down the debt.”

Peck did bring back some of the more than three dozen employees who voluntarily and involuntarily left the co-op under previous leadership.

“A year ago when they cut down $11 million in expenses and 38 employees, they should have been a little more careful with what they’re cutting and they’re not cutting,” Peck said.

Seven of those employees were brought back to the co-op.

“But through natural attrition, we’re still about the same level, 129 employees,” Peck said. “That seems to be the magic number for right now.”

On a forward-looking basis, more employees could be added with possible growth in the Pahrump Valley.

“Going forward, every time you add a thousand customers, you need to add two, if not three, brand new employees, just to take care of business,” Peck said. “Again, the growth is going to dictate what the heck’s going on out there.”

Peck pointed to several housing developments on the rise in the Pahrump area, including Artesia, Cottage Grove and Mountain Falls. Peck said that a lot of people will be attracted to the Pahrump area once the expansion of Highway 160 is completed; also, the cost of homes in Pahrump is considerably lower than neighboring Las Vegas.

In areas outside of Pahrump, mining is on the verge of increasing in Beatty and other areas.

“There’s a lot of economic development here in western Nevada, more so than most states,” Peck said. “This community’s going to be very, very lucky for those individuals who want a job or need a job, they can find it right here.”

This economic development potential in Pahrump will bring some challenges to Valley and other area businesses.

“I would think the challenges are going to be really strong when they get that freeway done,” Peck said. “You’re going to have more growth here in Pahrump than you ever seen in your life. Again, that is going to be a challenge for all the businesses here in the community.”

One of those things that growth will bring for Valley Electric is the need for more infrastructure, which Peck said the co-op is getting ready for, among other things.

“It’s interesting from the first day I came here, the six directors that hired me on March 4 are literally gone,” he said. “The new CEO has got a brand new set of directors.”

Peck’s comments came just days prior to Dave Dawson, District 6, retiring from his position. Dawson had announced earlier this year that he wasn’t seeking another term; his term was set to expire in the spring of 2020.

The other five directors that were at Valley when Peck arrived had resigned for various reasons throughout 2019.

Peck went on to say that he is really pleased with the new board.

“This board has taken control and taken care of business and doing it in a way that I would be extremely proud of if I come back here in a year or two to see what they’re doing,” he said.

Peck explained that the recently created committees are a way for members to take back their cooperative.

“Again, as I told you was going to do, I told the membership, no one was listening, they needed to get back in control of their cooperative,” he said. “The way you do it is board member committees …”

The committees at Valley include ones that work on policies, bylaws and finance, along with a foundation committee.

“One of the things that I rolled out, told them yesterday at my exit interview, what they need to do is look at how we can take it and come up with more energy conservation, more energy efficiency programs for the members to reduce their bill, because what’s going to happen is that going forward with all the regulation in renewables, renewables are not cheap,” he said.

The cost of renewables is going to raise the cost of wholesale power, according to Peck.

“The board needs to take care of that and help the members through this process by giving them ideas of how to reduce your overall usage and also how to reduce the demand in the summertime, which is where you’re really going to get nailed,” Peck said.