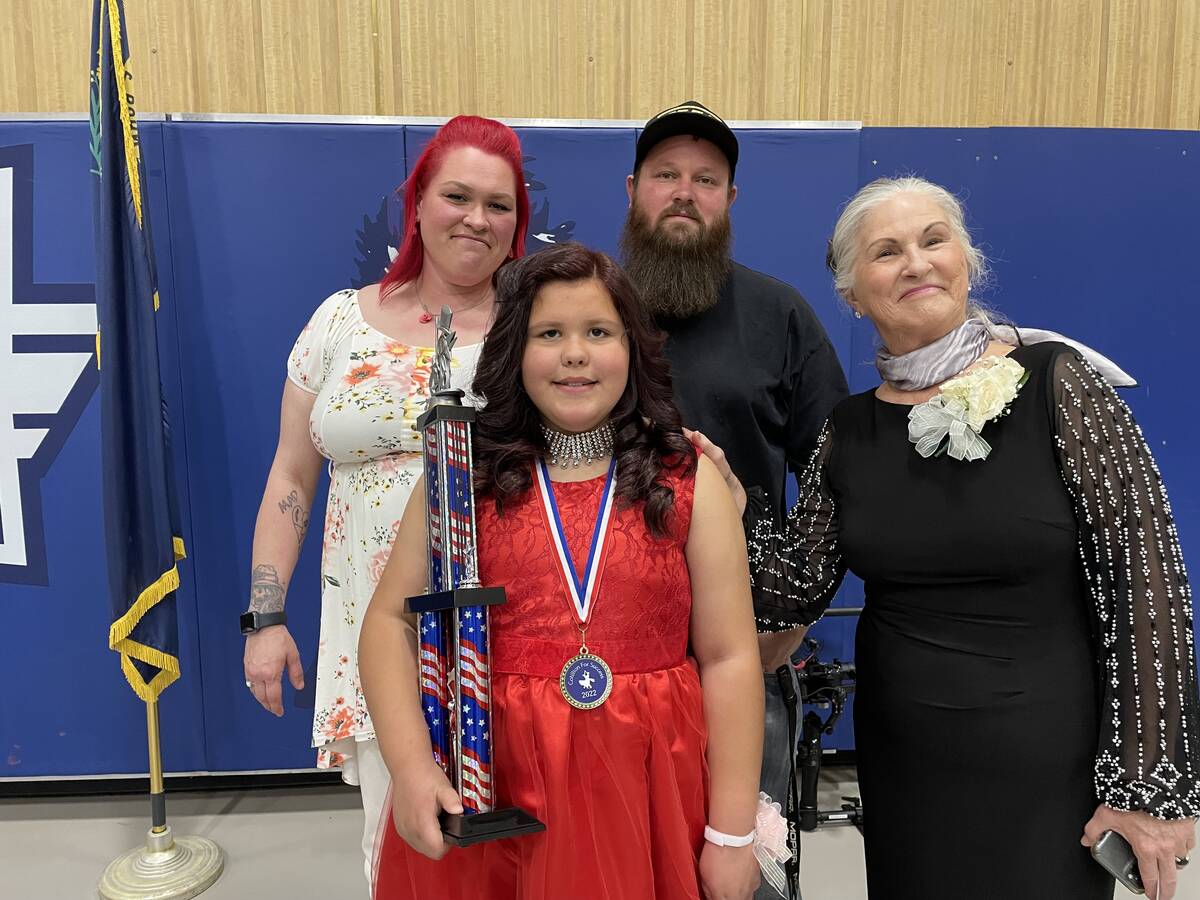 Isabella Chavez was awarded the “Manners Ambassador 2022” trophy via a vote by her cotillion peer. Chavez celebrated with her parents and program coordinator Sharen Black. (Special to the Pahrump Valley Times) 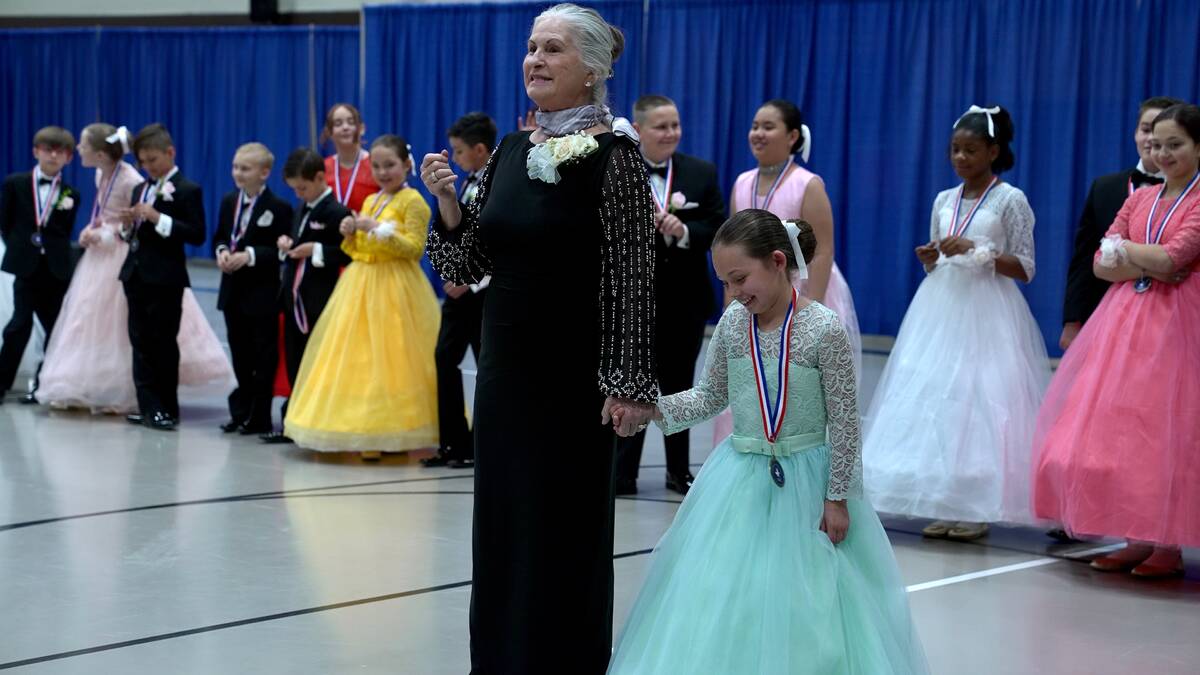 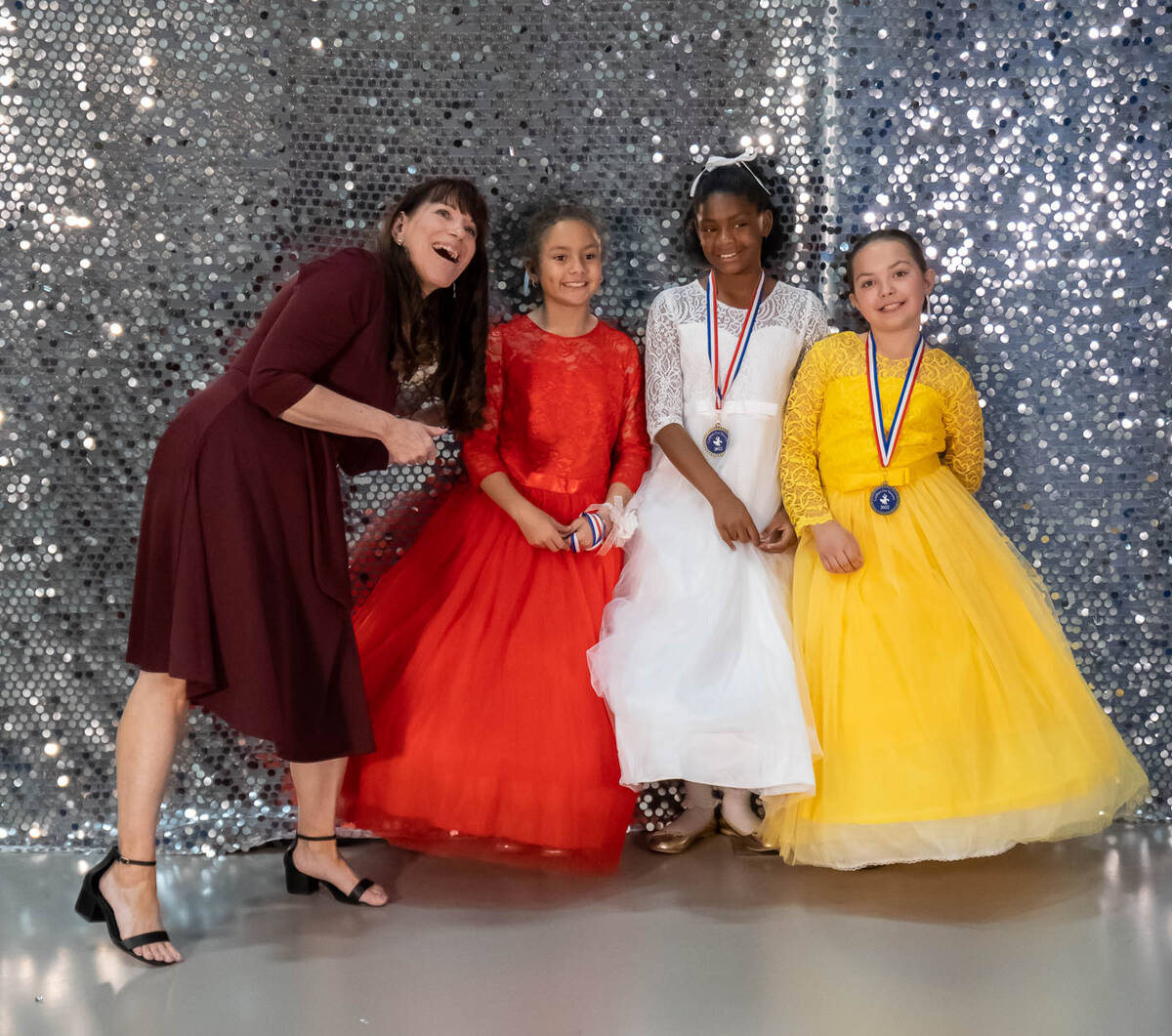 J.G. Johnson Elementary Debbie Carle poses with three of her students at the cotillion on Saturday. (Special to the Pahrump Valley Times)

The Cotillion For Success Ball was held Saturday April 9 at J.G. Johnson Elementary.

It showcased the culmination of months of study and practice within the realms of manners, civility, confidence and respect. Thirty-one children in fourth grade, plus one in fifth grade, were selected based on academic performance, behavior and need. Lori Lentz and Julie Abelar, faculty at the school, said they’ve seen postive changes in the kids involved in the program.

Cotillion programs — inspired by 18th-century ballrooms in France, and later evolved by traditional U.S. Southern debutantes — have the potential to increase a child’s success by preparing them for a world of work and careers, according to organizers.

The first-of-its-kind local project was orchestrated by Sharen Black, founder of the Cotillion For Success program.

“It was important for us to do this in an underserved community because children who have all the riches get to go to programs like this, but so many other students don’t,” she said. “We really had such support from the principal, Debbie Carle, and the vice principal, Sylvia Demasi – they didn’t just say they wanted the program, they fought for it. They went to the county commissioners and they fought for this program to come to J.G. Johnson.”

Last fall, county commissioners approved a $260,000 grant request to bring cotillion instruction to the Nye County School District. About a $100,000 in support came from the Nye County COVID Relief Program, while the remaining came from the county’s American Rescue Plan Act fund.

All five commissioners attended the ball on Satuday.

Topics covered included dining etiquette, proper seating, how to be a polite guest, introducing yourself and your guest, greeting people — even school bus etiquette.

Nye County bus driver Robin Lumos volunteered her time on Saturday to help with the program.

“You have already compensated me,” she said after working with the kids.

Knowing the rules— knowing where it’s OK to touch, what to do and how to dance— builds confidence and sets the table for meeting a variety of nice people within an elegant social environment, such as a wedding reception or an inaugural ball in Washington, D.C.

The Nye County School District will have a 10-module video program to train future students, featuring local graduates from the program. Gowns and shoes were purchased for the girls out of the grant money, and tuxes were rented for the boys “for a great price” from Friar Tux in Las Vegas.

The gowns the young ladies wore Saturday remain the property of the school system, for use with future cotillion students.

Tina Trenner, a local broadcast media specialist was instrumental in bringing this opportunity to Nye County. She explained that future cohorts will need to go out into the community for donations of services, venues, dance talent, instructors, and money to support the program to ensure it remains free for students.

On Saturday, the girls arrived at the school at 11 a.m. to get dressed and have their hair done. The boys began to arrive soon after to get dressed in their tuxes.

At precisely 1 p.m., Las Vegas performer Ted Mills launched into “Girl From Ipanema” on his elaborate keyboard synthesizer and sound system. The beautifully decorated gymnasium at J.G. Johnson was filled with the classic music of a full jazz and swing band. He served as the attentive maestro for the entire event.

The cotillion graduates, wearing tuxes and colorful hoop-skirt gowns, promenaded arm-in-arm into the venue after an introduction from Black.

Parents, friends and local dignitaries seated in the bleachers were completely charmed. When the children promenaded in together, each couple took turns to address those gathered. The young men introduced the young ladies on their arms with a sweep of his free hand, and then introduced themselves, projecting and enunciating with practiced skill.

Black invited the children to sit at the eight round tables, adorned with cloths, silverware, napkins and decorations. The crowd watched as the boys held out a chair for their partner and helped her sit comfortably. Waiters delivered individual plates of chicken, rice and green beans to each graduate, along with a soft beverage. Dressed in their finest, the stars of the show began to eat and converse, maintaining perfect posture. As the children dined, guests were served prepared plates of lunch, cafeteria style. They proceeded to their separate tables.

One dance on Satuday was set aside for all of the children to invite an adult in the audience to dance. Breanna Dean navigated five risers of bleacher benches in her hoop skirted gown to invite Lt. Gray of the Nye County Sheriff’s Office to dance with her. He graciously accepted.

At the end of the day, votes were tallied from 10 different classes to determine the Cotillion For Success Manners Ambassador 2022. The winner was Isabella Chavez.

At the conclusion of the ball, professional photographers captured group photos and individual portraits of the graduates. “We give all these portraits to the kids, and send digital versions to their parents, so they have mementos,” Black said.

The community has also been supportive of the program, Black said.

She described a situation in October where children needed to practice dancing in a carpeted room at the elementary school — not exactly an appropriate dance floor for a cotillion.

The team reached out to Home Depot and its flooring manager chose the perfect flooring,Black said.

Home Depot donated the materials for a removeable dance floor to place over the carpet and save for future use.

Black applauded Kayla Baker and Savannah Sullivan of Supercuts Salon in Pahrump who donated time and products for the children. On Saturday morning at the school, the women professionally arranged the hair of all of the girls into opera buns with adorning ribbons.

Parents Bo and Hector Herras were pleased that their daughter, Elizabeth, had participated in the program.

Elizabeth’s teacher phoned the family the next day to encourage them all. Her teacher really wanted Elizabeth in the program. There is a commitment to time and logistics on the part of parents, too. Flash forward to April 9. Elizabeth’s mom confided over the luncheon that her daughter had had a bit of a rough time sleeping the night before, because she was so excited about the ball.

“I was a little nervous about dropping her off here at 11 to get dressed and get her hair done,” the mother said. “This is a really good thing. Elizabeth is less shy.”

Cotillion For Success has been designed to welcome civility back to the United States of America. Black points out that “good manners never go out of style. Bad manners are seldom forgotten.”