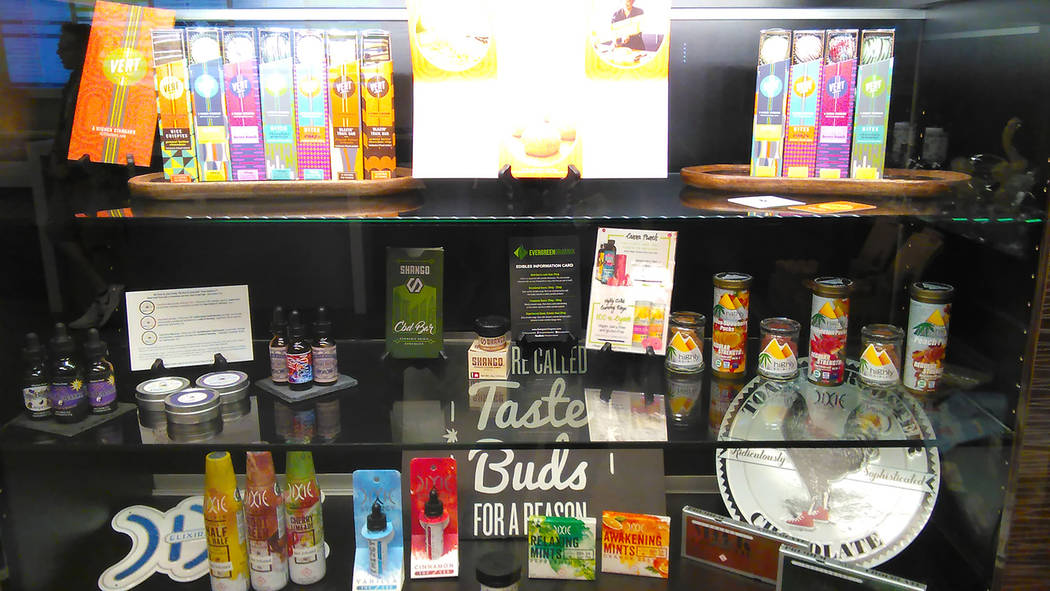 Selwyn Harris/Pahrump Valley Times A modest knowledge with medical and recreational marijuana would be helpful to would-be employees at the Grove pot dispensary. Manager Zach Wright recently hired 25 new employees at the facility at the 1541 E. Basin Avenue location. Wright noted that more positions may become available in the future.

As a result of its recent job fair, The Grove medical marijuana dispensary has 25 new employees.

“The job fair was excellent and actually I am all hired up and ready to go,” he said. “I ended up hiring 25 people. There were a lot of great applicants who stopped in and I want to thank everyone who expressed an interest in working here at The Grove.”

Wright noted he hired the additional employees, as recreational marijuana is expected to become available to adults in the Silver State come July, which no doubt he said, would greatly increase foot traffic at the dispensary.

“The Grove will offer recreational marijuana,” he said. “We’ve got all the licensing for it, so we are good to go. Of course, it just depends on what happens with all the hoopla at the courts.”

“The liquor distributors are arguing that the law dictates they get the first shot at the equivalent licenses for recreational marijuana,” he said. “Officials from the Nevada Cannabis Coalition says any delay could cost the state millions of dollars a month in tax revenue targeted for schools.”

Additionally, Wright said the alcohol distributors were very late in expressing their respective interests in delving into recreational marijuana.

“They had no real interest in the beginning, and if anything, their interest was lukewarm to the whole idea of legal recreational marijuana,” he said. “Now, they want a piece of the action so we will see how it goes.”

Wright also suggested that legal recreational pot may create an uptick in the medical marijuana industry throughout the state.

“Just going over the analysis, it shows the medical industry is probably going to boom a little bit more,” he said. “We are seeing a rise in people obtaining their medical marijuana cards and that’s just due to the concern of the sales tax being so high on the recreational marijuana side.”

For those who missed the June 3 job fair, Wright said The Grove is still accepting applications.

“I do want to say that there will probably be more positions opening up later on, depending on how it all works out,” he said. “I continually tell the public that if they are looking for a job, please drop off their resume.”